Community, campus rally in support of Ukrainian scholars looking to restart their academic endeavors at Purdue amid ongoing war

Ukrainian scholar Valeria Yatsenko (left) is grateful for the hospitality shown her by Purdue, the campus and Greater Lafayette community, including Crestview Apartments owner William Shen (right). The assistance through Purdue’s Ukrainian Scholars Initiative means she will be able to finish her doctorate in economics, international currency and risk management from the University of Kyiv on Purdue’s campus while the war continues in her home country. (Purdue University photo/John Underwood)

William Shen’s ties to Purdue University are deep and wide, dating to when his parents arrived in West Lafayette from China during the late 1940s, fleeing the fallout from World War II. His father, John, a Purdue alum, and mother, Florence, settled here. During the 1960s, they started a family business, Crestview Apartments, that continues today to provide housing for Boilermakers, including Purdue's large international student population.

So, when the housing need became clear for scholars from Ukraine coming to the Purdue campus beginning this summer, William could empathize with their plight. Indeed, he felt called to do what he could to assist in this urgent Purdue-led effort and help these scholars who are escaping the horrors of Russia’s military invasion of their Eastern European country. 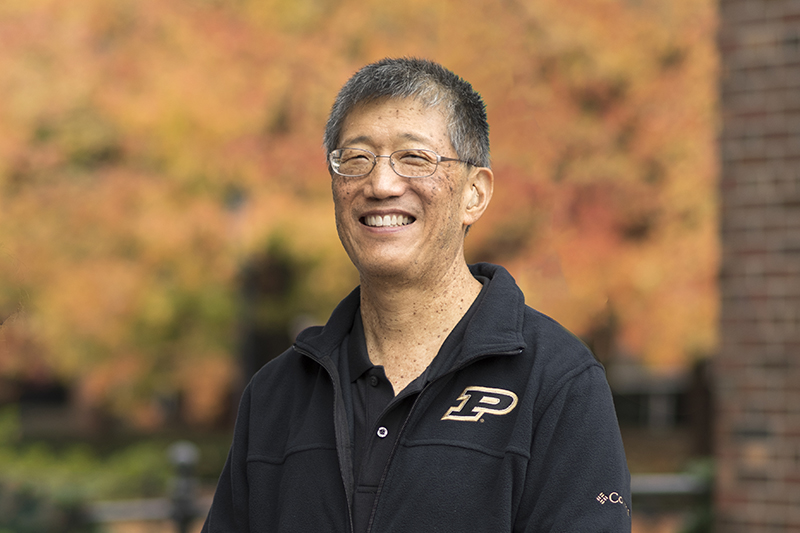 “Through my Christian faith and what I’ve learned in life, if you are given an opportunity to help, then you should respond,” says William, a Purdue engineering alum who also met his wife, Liesl, while studying here. “We feel very blessed and fortunate to be able to help. How could we not, given what these scholars have been dealing with in their home country?”

At Faith Church, over 20 families have given their time and resources for each scholar’s West Lafayette apartment — above and beyond their normal tithing to the church, says Aaron Birk, pastor of international ministries at Faith. Things like bedding sets, bowls, pots, pans, cups — everything that’s needed for cooking — as well as coffee makers, cleaning supplies and furniture. “When the scholars moved in, we wanted to welcome them and show them hospitality. We wanted to love our Ukrainian neighbor as ourselves,” Birk says.

Purdue’s Ukrainian Scholars Initiative, launched March 25, is one of the first, largest and most ambitious university-led program in the United States. Its goal: to help these faculty members and scholars whose academic pursuits have been derailed by the conflict, says Mike Brzezinski, Purdue’s dean of international programs.

Eight scholars are here now, and the ninth and final scholar is expected to arrive at Purdue soon to resume their research, teaching and studies for at least the next 12 months.

The Ukrainian visiting scholars are engaging in their own research or supporting research conducted by Purdue faculty members. Additionally, several are students enrolled in doctoral programs who are at the dissertation research stage of their degree program. The scholars’ impressive scholarship stretches across a diversity of disciplines — from chemistry, library sciences, psychology, linguistics, communication, sociology and neuroscience to political science, management, history, and earth and planetary sciences.

In all, Purdue received approximately 100 inquiries from scholars in Ukraine interested in participating in the program, Brzezinski says.

As the world nears the nine-month anniversary of Russia’s invasion of Ukraine on Feb. 24, the Purdue campus and Greater Lafayette communities are rallying in support of the Ukrainian scholars arriving here as part of Purdue’s program to help them resume their academic pursuits.

Each scholar has their own story of resilience and persistence. They have overcome incredible and impossible obstacles. They have escaped — often with their families — the horrors of Russia’s military invasion, which has displaced nearly 7 million people and left devastation, destruction and disruption across their country since late February. More than 6,370 civilians have been killed since the invasion started, while over 9,770 civilians have been injured, the Office of the United Nations High Commissioner for Human Rights reports.

The strong Purdue-community connections have been essential to the success of the Ukrainian Scholars effort, which, Brzezinski says, will benefit not only the scholars and their families but the entire university campus and Greater Lafayette.

“The Shen family, they set aside 19 apartments for us through Crestview Apartments. Without that assistance, our Ukrainian Scholars Initiative was probably a nonstarter,” Brzezinski says. “Pastor Birk and his congregation at Faith Church are furnishing the apartments before the scholars arrive, a wonderful service.” 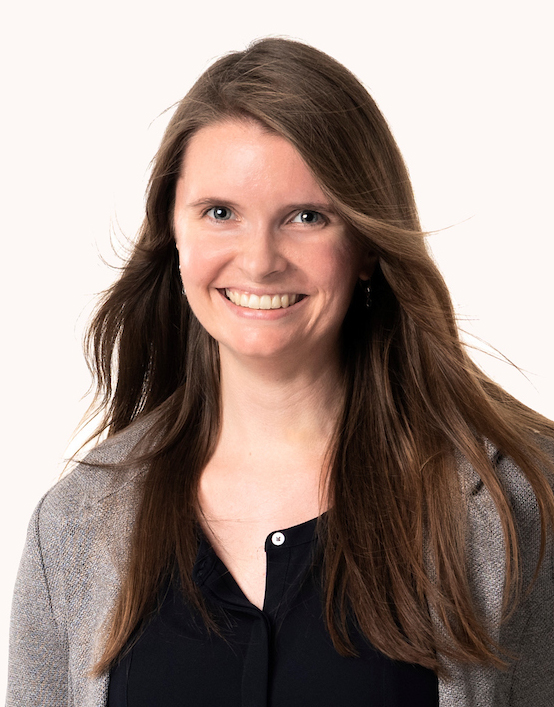 A member of Faith Church and volunteer in its international ministry, Purdue staffer Kayla Wiles has been motivated by the incredible bravery and resiliency of the Ukrainian people, feeling the desire to do what she could to help them in small but tangible ways. And she’s heartened by Purdue’s willingness to support these scholars’ careers during this difficult time in their lives.

“I had felt particularly helpless watching events unfold in Ukraine, so I was excited for the opportunity to get what the scholars needed for their apartments,” says Wiles, senior science writer and communications specialist for Purdue Marketing and Communications. “It’s been very doable for me to pick up toilet paper, laundry detergent, pots, pans or whatever else they need on my regular grocery runs.”

Tim Cason, a Purdue professor of economics and the Gadomski Chair of Economics, and his wife, Renee, a nurse at Unity Healthcare, connected with the Ukrainian Scholars effort through their many years of involvement with Purdue’s International Friendship program. From there, they developed a list of general needs to furnish an apartment — everything from shower curtains and bathroom rugs to toilet paper, shampoo and toothbrushes, Renee says. That was done for every room in a typical apartment before that list was passed onto Faith Christian School, where students rallied to purchase the items and set up the first few apartments.

“Later, it was passed back to me to rally my friends and co-workers for the last two apartments,” says Renee of her co-workers at Unity Surgical Center in Lafayette. “When asked, people get excited about helping the Ukrainian scholars. It’s a wonderful feeling to help any of these scholars.”

With seven locations and a total of 500 Crestview units near Purdue’s campus, Shen began setting aside the apartments for the Ukrainian scholars in May, not knowing precisely how many might be able to come to the U.S. and when they would arrive, given the challenges on travel wrought by the war in their country. Shen is working with the scholars on their 12-month leases, aligning them when they best suit their needs and timetables. 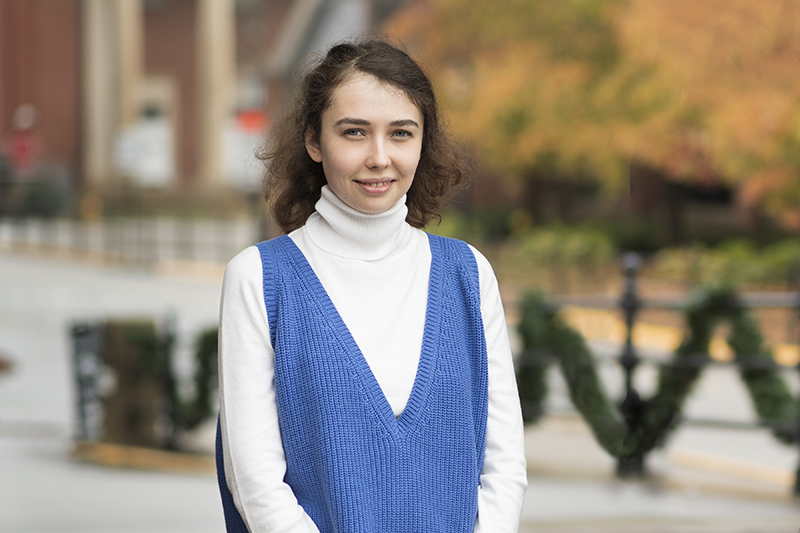 “I’m incredibly grateful to Purdue, Crestview Apartments and the Faith Church community for all they have done to make us feel at home here in West Lafayette and for providing the little things to make our time here possible,” says Valeria Yatsenko, who arrived at Purdue in late June to finish her doctorate in economics, international currency and risk management from the University of Kyiv.

At St. Alexis Orthodox Church in Battle Ground, several families with strong ties to Ukraine were already a part of the congregation. So, newcomers have felt comfortable with the familiar liturgy and message, even if it’s in a different language, says Father Gregory Allard. That has included the family of Purdue Ukrainian scholar Illia Kuznietsov and wife, Larysa, and their two children. And in recent weeks, fellow scholar Larysa Moisieienko, an associate professor of philosophy at Donetsk National Technical University, has attended Sunday’s divine liturgy with the Kuznietsov family and joined the coffee hour after the service.

“We are one, large family. When people come to a faith community, we try to help them make a difference in the world around them,” Father Gregory says. “At the same time, it’s the prayer of our church that the hostilities would end and life for the Ukrainian people and those who are here temporarily would be able to return to their home country.”

Illia, an associate professor of neuroscience at Volyn National University in Lutsk, was at Purdue on a yearlong U.S. Fulbright fellowship with Purdue’s Department of Psychological Sciences in the College of Health and Human Sciences when the war broke out in February. His stay here was extended through the Ukrainian Scholars Initiative.

Shen and Birk agree their assistance is the least they can do for the Ukrainian scholars and their families. For that’s what defines Purdue, they say, noting that Boilermaker blood runs deep for the Shen and Birk families.

William Shen’s parents came to America — his father, John, earned a civil engineering degree from Purdue while his mother, Florence, received a degree from the University of Illinois at Urbana-Champaign but spent her professional career supporting bacteriology research in a Lilly Hall lab at Purdue. When it was his time for college, William chose Purdue, earning an undergraduate degree in mechanical engineering. While a Boilermaker, he also met his wife, Liesl, who earned an undergraduate degree in chemical engineering.

Before joining the pastoral staff at Faith Church in 2016, Birk received an accounting management degree from Purdue’s School of Management. He’s been inspired by the stories coming out of Ukraine, and by those who are arriving at Purdue — the challenges they have overcome and their willingness to fight to maintain their freedom and protect their homeland.

“There are pressing needs, both physically and spiritually, that war reveals,” he says. “We see the war in Ukraine as an opportunity for Faith Church to help meet the pressing needs of these Ukrainian scholars joining our community to continue their academic pursuits at Purdue.”