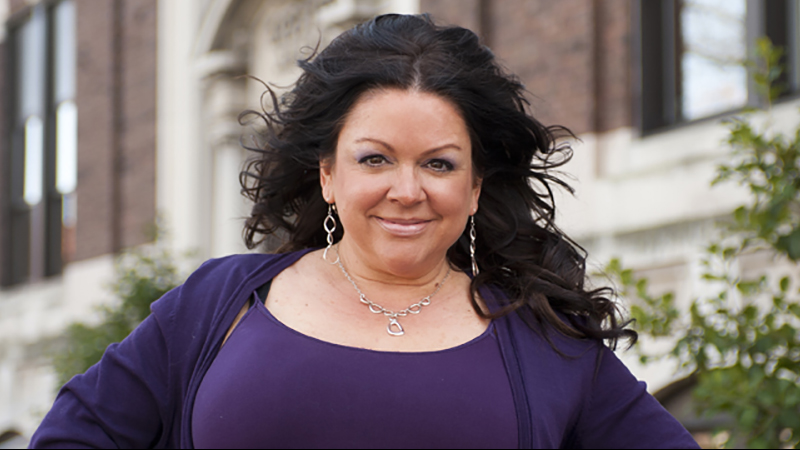 Whether she is providing a new pair of shoes to one young girl or supplying an entire community with computers, Kimber J. Nicoletti-Martínez has touched the lives of thousands of farmworkers throughout the years. It is this commitment and dedication to service on both a macro and micro level that made Nicoletti-Martínez a winner of this year’s national Jefferson Award for Outstanding Public Service by an Employee.

Presented by Multiplying Good, this national award recognizes individuals and organizations going above and beyond to serve their communities, and who have demonstrated considerable and sustainable impact through service. This award is about building community, celebrating and elevating the good, and in doing so, multiplying it — in the belief that acts of service ultimately tie everyone together.

Purdue participates in Multiplying Good’s Champions program, joining various businesses and educational institutions nationwide that partner with the organization to engage in meaningful public service and celebrate their communities with Jefferson Awards. Purdue employees are nominated; then, up to six award winners are chosen and recognized annually by the University. From those six, the top Jefferson Award winner is then selected by Multiplying Good to represent Purdue at the national level, thereby competing for a national award.

Nicoletti-Martínez, as principal investigator and director of the Multicultural Efforts to end Sexual Assault (MESA), a Purdue University Extension program situated in the Department of Agricultural Sciences Education and Communication (ASEC), and Latino outreach coordinator for the National AgrAbility project and for Indiana AgrAbility, was recognized for abundant contributions to service. Those three positions as well as Nicoletti-Martínez’s own personal initiatives allow her to bring resources, supplies and education to countless farming communities throughout the state.

Work with MESA and AgrAbility

Nicoletti-Martínez began her career in social work over 20 years ago and notes how it has always been her objective to engage with farmworkers and their communities. Nicoletti-Martinez said many farmworkers and their families live in or on the cusp of poverty and therefore she felt that she needed to be a part of equipping them with the necessary tools for life. It is this personal draw that sparked the idea to found MESA back in 2008.

Today, MESA works with underserved and underrepresented populations in Indiana to provide education and culturally relevant tools to prevent sexual violence, child sexual abuse and promote healthy relationships. Nicoletti-Martínez has instituted several programs looking at violence in the lives of farmworkers and has worked to alleviate this suffering. Through her work with MESA, Nicoletti-Martínez also began partnering with other farmworker advocacy programs to increase access for medical care, education, training and educating farmworker community about their rights. To date, Nicoletti-Martinez has raised over $2 million in aid to support American farmworkers and these programs.

In addition to her involvement with MESA Nicoletti-Martínez works with AgrAbility, a USDA-sponsored program that assists farmers, ranchers and other agricultural workers with disabilities. Disabilities may be physical, chronic health issues such as diabetes or arthritis as well as mental health. In this position she works to enhance the quality of life for migrant farmworkers with disabilities in Indiana and across the United States.

Nicoletti-Martínez plans to continue cementing her work with MESA and AgrAbility and building a capacity for stronger, healthier farmworker communities. She said, “This is more than just philanthropy for me. It has to do with being a social change agent and looking at what I can do to make a difference, change attitudes, and improve the lives of these farmworkers.”

Over the years, one of the biggest projects for Nicoletti-Martínez has been the creation of the farmworker support drives. What began in 2004 as a small holiday donation drive that reached five families has since turned into a much larger program hosted under MESA. This program now provides supplies to over 5,000 individuals around the state of Indiana and donations are delivered multiple times throughout the year. Nicoletti-Martínez notes the impact this program has when describing the reaction of a young girl after her and her family received their donation bundle. This family had been specifically referred to the program by a colleague of Nicoletti-Martínez.

She said, “When my colleague went to see the family after the donations were delivered, their little girl came running out of the house in her new pink outfit and was grinning ear-to-ear, pointing and saying ‘look, look at my new outfit.’ It is really the small, individualized moments like these that show you how you are touching a person’s life.”

The structure of this program has adapted to the current times and efforts have since been moved primarily online. Currently, a gift card drive is being held as well as an open gift registry set up.

“If anything became clear to me during COVID, it is how essential farmworkers are to all of us, all of our families and all of our communities. Even though they are so essential, they are often also invisible to the public. I want to be able to give them a voice and show how these are the people bringing to you the very food that is on your table. There is a level of gratitude that we should all feel and that is what I want to get through to everyone,” Nicoletti-Martínez said.

Nicoletti-Martínez hopes to continue following in the footsteps of two fellow Jefferson Award winners and personal heroes, Dolores Huerta and Cesar Chavez, as she continues to advocate for Hoosier and American farmworkers and amplifies the importance of their work on both a micro, individual, level and a macro, communal, level.