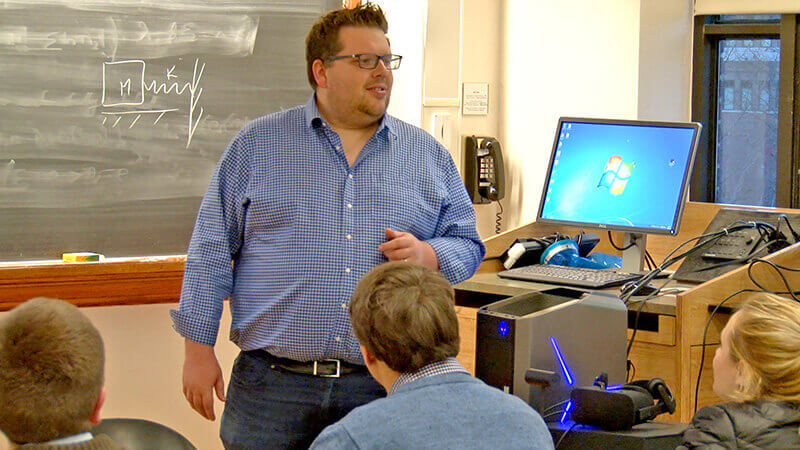 Note: The profile below is part of Purdue Today's ongoing series on Purdue's winners of the 2020 Outstanding Undergraduate Teaching Award in Memory of Charles B. Murphy, Exceptional Early Career Award and Excellence in Instruction Award for Lecturers.

As a young mechanical engineering student, Jeffrey Rhoads pictured himself working at a national laboratory or in industry. But by fluke, while still a master’s student, he found himself at the front of the classroom — teaching.

He knew that mechanical engineers have huge opportunities to impact the world. But teaching shifted his view. He realized he might have an even bigger impact as an educator.

“I fell in love with teaching,” says Rhoads, professor of mechanical engineering. “That change in my mindset, when I was a young grad student, is what drove my passion for the field.”

Since coming to Purdue in 2007, Rhoads has influenced thousands of students in the classroom and many more with his online courses. With undergraduates, his teaching focus is the theory of dynamics, the interplay of forces in motion. He is also known for helping pioneer a popular course in roller coaster dynamics. At the graduate level, he teaches nonlinear systems and mechanical vibrations.

Rhoads also is an emerging leader in the field of engineering education. For the past decade, he has worked closely with a multidisciplinary group of colleagues developing an online teaching environment called Freeform. The idea is to take dynamics, a fundamental subject in mechanical engineering, and create a range of ways for students to engage with it.

“The concept of Freeform stems from the notion of having materials tightly integrated, using the same verbiage and presentation styles but available in multiple formats,” Rhoads says. “Whether that's online videos or a discussion forum, or even our hybrid textbook, we want the look and the feel of all these resources to be aligned, so that students can engage with the material how they prefer.” In 2019, Rhoads and his team landed a $2.5 million award from the National Science Foundation to expand Freeform to other universities across the United States.

For Rhoads, the Murphy Award is recognition for these efforts. “It is another form of validation for the work that my colleagues and I have undertaken over the last 5-7 years,” he says. In particular, he is grateful for fellow faculty members Chuck Krousgrill, 150th Anniversary Professor of Mechanical Engineering; Ed Berger, professor of engineering education and mechanical engineering; and Jennifer DeBoer, assistant professor of engineering education. “They not only motivate me to do what I'm doing, but they help me hone my craft.”

Although he’s not teaching during the COVID-19 pandemic, Rhoads says the dynamics course, officially known as Basic Mechanics II, was moved completely online in a matter of hours.

“We have built up a tremendous resource base of instructional videos, as well as a class-specific discussion forum,” he says. “So, thanks to the work we’ve done over the past decade, the infrastructure was already in place.”

As director of the Ray W. Herrick Laboratories, Rhoads oversees world-class research related to acoustics and vibration, high-performance buildings, and electromechanical systems, among other topics. Despite less time in the classroom, his motivation remains the same. “Now I am empowering younger instructors and graduate students to do a good job, to be effective, and to positively impact our society,” he says.

And Rhoads looks forward to time in the classroom, where he still experiences the thrill of seeing someone "get it." “You feel like the student is on the right trajectory,” he says. “Those ‘aha’ moments give me confidence that, when that student leaves the halls of Purdue, they are heading the right direction. I find an innate joy in that.”

In the classroom, Rhoads’ goal is to engage students. “I am a strong believer that classroom lectures are some fraction performance art and some fraction technical knowledge dissemination,” he says.