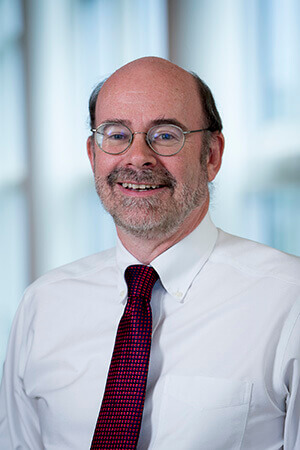 Richard Kuhn, the Trent and Judith Anderson Distinguished Professor in Science and the Krenicki Family Director of the Purdue Institute of Inflammation, Immunology and Infectious Disease, is part of a new, five-year global effort totaling up to $35 million that will bring together experts from around the world to streamline and accelerate the development of immunotherapeutics against some of the world’s most dangerous viruses.

The Viral Immunotherapeutic Consortium, headquartered at the La Jolla Institute for Immunology, is funded through the Centers of Excellence for Translational Research program at the National Institute of Allergy and Infectious Disease. The VIC will focus on the clinical development of therapeutic candidates identified by the VIC for Ebola and other related filoviruses; arenaviruses, such as Lassa virus; and a third major global threat, alphaviruses, which infect millions of people across the world.

The La Jolla Institute for Immunology, located in the Science Research Park of the University of California, San Diego in La Jolla, California, is a nonprofit biomedical research institute covering 145,000 square feet.

Viral outbreaks often occur in the world’s most vulnerable countries, where government and health officials have few resources to prevent their spread before they cross borders. According to the U.S. Centers for Disease Control and Prevention, some infectious diseases can migrate from a remote village to cities across the globe in just 36 hours, posing a worldwide threat. While other researchers seek to improve surveillance and emergency response measures to deadly viruses, the VIC is focusing on treatment and prevention.

Consortium members will study disease survivors to understand how their antibodies naturally fend off infection. They will then conduct detailed structural studies of interactions between virus proteins and these antibodies to determine which architectural features elicit the most robust protective immune response to guide development of treatments and vaccines.

Under Kuhn’s direction, Purdue University researchers will investigate viruses using an arsenal of traditional techniques and advanced technologies such as cryo-electron microscopy, a technique in which samples are preserved at cryogenic temperatures and then viewed with an electron microscope, allowing scientists to visualize the atomic structures of proteins and viruses.

“For this consortium, we’ll be studying how antibodies bind to these viruses,” Kuhn says. “Visualizing these interactions will reveal how antibodies attach to the virus particles and render them non-infectious.”

Ultimately, he says, findings could lead to new engineered versions of antibodies that are more potent and more broadly reactive that what infected patients produce. To date, there are no approved therapeutics for this class of viruses.

Kuhn is recognized internationally as an expert in the structure and assembly of viruses known to be human pathogens. In 2016, he co-led a research team with Michael Rossmann that was the first in the world to determine the structure of the Zika virus. Their discovery was made possible through cryo-electron microscopy.

“When we worked on the Zika virus, it only took us a week to get a structure, which was unprecedented at the time,” Kuhn says. “It's much more routine now.”

Kuhn will be aided in his consortium work by a new, state-of-the-art cryo-electron microscope being purchased by six major life sciences entities — Purdue University, Indiana University School of Medicine, Indiana University Bloomington, the University of Illinois at Urbana-Champaign, Eli Lilly and Co., and the Indiana Biosciences Research Institute. The second cryo-electron microscope at Purdue, it will be placed alongside the first in the Wayne T. and Mary T. Hockmeyer Hall of Structural Biology once building renovations are complete in early 2020.

“Cryo-em has transformed the science of structural biology. It gives us maps to the molecules of life,” says Kuhn, who also used the technology to co-determine the structures of the immature and mature Kunjin virus, a strain of West Nile virus. “Scientists can then use this information to identify possible target sites for drugs, vaccines or other therapies.”