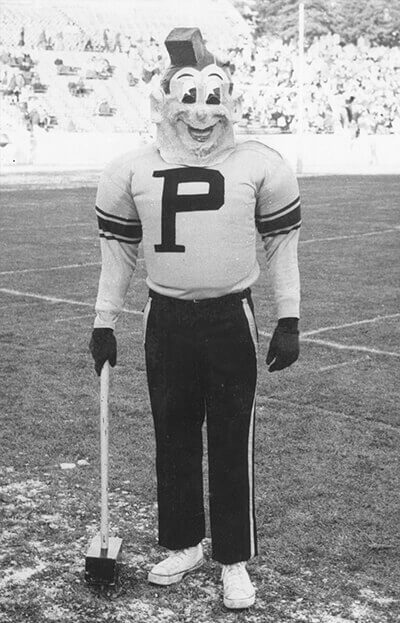 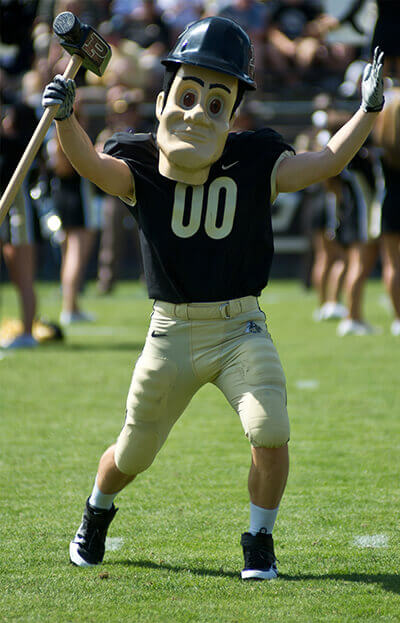 Pete’s story began in 1940 when University Book Store hired California artist Art Evans to draw a logo. The grinning, muscular icon reflected a boilermaker tradesman with a mallet for molding steel and hat to keep grease out of his hair.

In 1944, the logo jumped from retail to academe, starring in Purdue’s Debris yearbook. “Introducing Boilermaker Pete,” a headline read, with Pete drawings appearing throughout in various outfits: with signs for the Marines, Army, and Navy; carrying a rifle; toting a hoe; and wearing a home economics apron among them.

Pete moved from page to personhood on Sept. 28, 1956, at a pep rally before Purdue played Missouri, when student Larry Brumbaugh (ME’57) donned foam rubber padding, football shoulder pads, long black pants, sweater with a P, and a papier-mâché head.

John Knote (LA’59), the third Purdue Pete, from spring 1958 to spring 1959, says the head weighed 36 pounds. He lost it when he tackled Bucky Badger after the Wisconsin mascot stole his hammer. “I tackled him in the end zone, and the head fell off and rolled near the goal post,” Knote recalls.

The second Pete, David Hull (AAE’58), says, “When I raised my arms to lead a cheer, the pads moved upward and the head scraped across my nose — very hurtful.”

For David Knoll (IM’61), the fall 1959 Pete, the foam padding proved challenging. “It was raining, and raining hard,” he says of a game day. “The foam rubber inside the sweatshirt soaked up so much water, it felt like I was carrying a weighted vest.”

Poor Pete lost his head again in 1962, according to the “Purdue Pete History” on the Engineering Computer Network website. The head flew out of the back of the Boilermaker Special on the drive back from an Iowa City game and never was found.

In 1963, Pete took on a new look that lasted a dozen years. Still sporting the square hat, he was fat-cheeked and big-eyed.

“My head was pretty big, heavy, and bulky, but it also sported a big friendly smile,” recalls Pete Bodine (T’73).

The head size was limiting, says James Jenness (LA’75), Pete in 1974 and 1975. “The head was so cumbersome that not much could be done other than just being there.”

It was also a target. Jenness’s standout memory: “The trip to Ann Arbor, when we were shellacked 51-0, the temperature was around zero, and my head was (I guess) the best available target for snowballs.”

Next came a boyish look with an all-fiberglass, less cartoon-like head in 1976, created by Van Betulius (A’76) with help from an Evansville, Indiana, artist.

Jackson remembers narrowly escaping Bloomington fans who tried to steal Pete’s 47-pound head off his shoulders. “Fortunately, we were aided by IU’s police.”

With the dawn of a new decade in 1980, the Pete logo now 40 and the human mascot nearly 25, it was time for a grownup look. Out stepped a scowling Pete with thick, furrowed eyebrows. The 10-pound head was a welcome lighter weight.

A fiercer logo had been created five years earlier by Keith Butz, art director in the Telecommunications Center, and fans clamored for a tougher mascot, too. A 1979 athletics memo reads, “The head projects an image of a stupid, top heavy, wooden mascot,” and recommends, “The face should look, if not highly intelligent, not like the village idiot.”

Butz collaborated with Donald Carter, a designer in the office of publications, on a fierce look, a Sept. 18, 1980, Lafayette Leader article reported. Pete still sported the grease-protecting hat, but the sweater was replaced by a jersey. 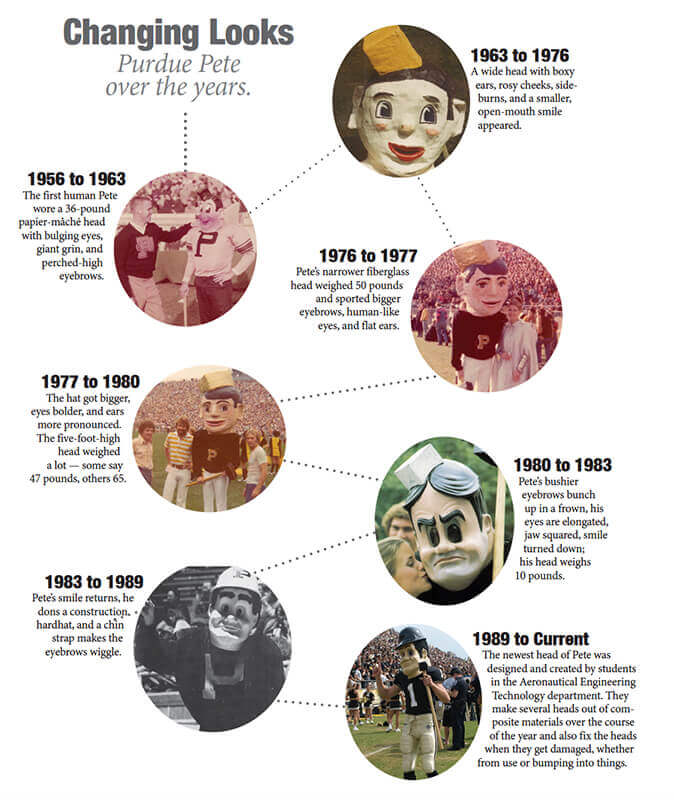 Perhaps that mean image helped Purdue beat Notre Dame in a last-second touchdown catch in 1981, one of David McGaughey’s (A’84) fondest memories as Pete. He also recalls Jim Rowinski’s bank shot for a 1983 basketball win over Illinois.

By that game, though, fierce Pete had been replaced by a friendlier version. The little square cap was gone, and Pete wore a construction hard hat.

“The chinstrap made the eyebrows wiggle up and down,” says Jeff King (AAE’85).

Pete’s head weighed 12 pounds, a problem for Andy Gentry (LA’90), who had broken his neck in a high school wrestling meet. “I was miserable, my neck was extremely sore, and I could barely hold the head up after each event,” he recalls.

The aviation technology department stepped in with a five-pound composite materials solution in 1989 that was also easier to move in.

The look has largely remained unchanged since. Christian “John” Coder (LA’92), Pete from 1989 to 1992, remembers frantic fun. “I did birthday parties, alumni functions, barbecues. I changed in restrooms and ducked behind cars to change.”

“We had one pair of old football pants we shared and rough football jersey replicas. For basketball, we just wore shorts and a black shirt with gold block P. My mother made one for us since the previous one was almost gray from laundering.”

His favorite memory: Making a backward hoop shot during halftime at the 75th anniversary of Purdue Basketball. He also broke his collarbone when fans piled on during a bit of horseplay with Bucky Badger.

Now: The newest head of Pete (1989 to today) was designed and created by students in the Aeronautical Engineering Technology department. They make several heads out of composite materials over the course of the year and also fix the heads when they get damaged, whether from use or bumping into things. (Purdue University photo)