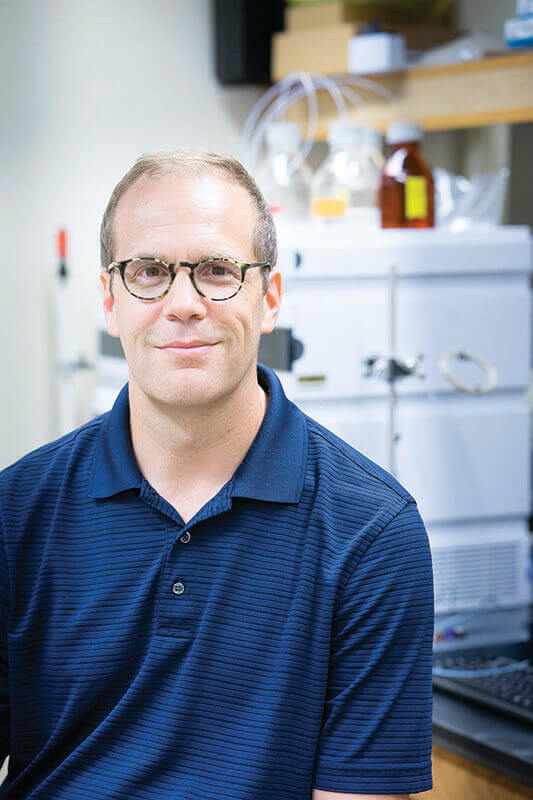 Jean-Christophe (Chris) Rochet, professor of medicinal chemistry and molecular pharmacology, has been named the new director of the Purdue Institute for Integrative Neuroscience. Rochet began his appointment on Jan. 15.

An internationally recognized neuroscientist, Rochet specializes in studying central nervous system disorders, including Parkinson’s disease, an age-related neurodegenerative disorder that disrupts the lives of an estimated 5 million people worldwide. His studies in models that reproduce key aspects of Parkinson’s disease pathobiology have yielded new insights into genetic and chemical suppressors of neurodegeneration.

In 2018, research in Rochet’s lab in collaboration with Riyi Shi, professor of basic medical sciences in the College of Veterinary Medicine, led to the discovery that  the compound acrolein accumulates in Parkinson’s disease-affected brain tissue -- a significant finding that could lead to new therapies as well as earlier diagnosis and prevention.

In 2017, Rochet was part of an international team that found that a common asthma medicine could reduce the risk of Parkinson’s disease by half. The research was selected as one of the top 10 drug discoveries of the year by the publication Technology Networks.

“Chris is highly accomplished in his field and brings an impressive track record of international research, interdisciplinary collaborations and administrative leadership to this position,” says Tomás Díaz de la Rubia, vice president for Discovery Park. “The vision he has outlined for building upon existing university strengths and forging new collaborations will help position the institute for maximum national and international impact in the field of neuroscience.”

The Purdue Institute for Integrative Neuroscience, a part of Discovery Park, was founded in 2016 to leverage Purdue’s strengths in science and engineering in several key research areas relevant to neuroscience, including neurodevelopment, neurodegeneration and neurotrauma, sensory systems, and neuroengineering.

PIIN is part of Purdue Life Sciences, an ambitious campus-wide initiative to amplify Purdue’s existing strengths in the life sciences with support from a $250 million, five-year investment from the University.

“I am honored to serve as PIIN director and to help strengthen Purdue’s reputation for excellence in life sciences research,” Rochet says. “I am particularly excited to work with the institute’s outstanding faculty to build upon the strong foundation achieved by our inaugural director, Donna Fekete. As director, I look forward to fostering cross-disciplinary partnerships and generating extramural funding to stimulate new discoveries and build innovative technologies in basic and translational neuroscience.”

Rochet obtained a PhD from the University of Alberta in biochemistry in 1998 and then worked as a postdoctoral fellow at Harvard Medical School, studying mechanisms of alpha-synuclein self-assembly in Parkinson’s disease. He joined the faculty of Purdue University in 2002.

About the Purdue Institute for Integrative Neuroscience

The Purdue Institute for Integrative Neuroscience is one of six interdisciplinary life science research centers harnessing the university’s unique strengths to improve the quality of life for people around the globe. Through an ambitious integration of traditional life sciences with Purdue’s powerhouse engineering program, PIIN aims to address the greatest challenges in mental illness and neurological disorders by revolutionizing diagnostic and treatment capabilities.