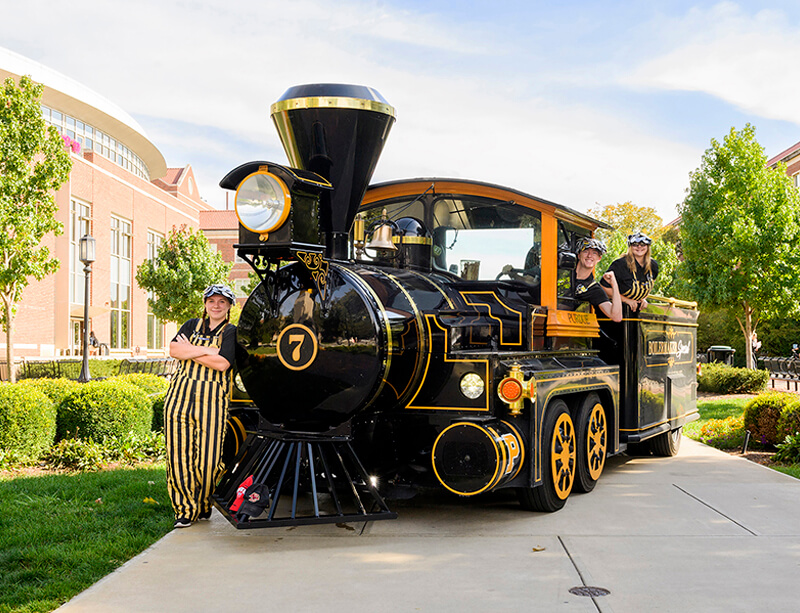 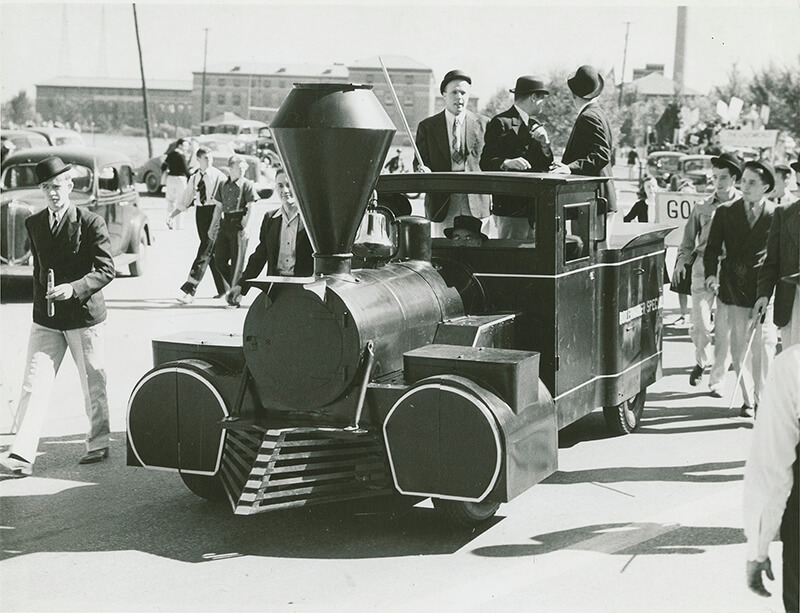 Purdue's sesquicentennial celebration provides inspiration to reflect on the University's 150-year legacy. How has the University changed over the years? Purdue Today will take a look through its new "Then & Now" photo series, which will highlight Purdue traditions, buildings, landmarks and more. The first topic of the series is the Purdue's beloved mascot, the Boilermaker Special.

It is a picture-perfect fall day at Purdue. The leaves are turning and the air is crisp. In the distance, you hear a whistle blow and a horn sound, which is followed by a bell. It can mean only one thing. It is game day.

Traveling through campus, the Boilermaker Special is filled with students cheering for victory while members of the Reamers serve as pilot. The mighty locomotive symbolizes the Boilermaker spirit of strength, perseverance and brute force. As the official Purdue mascot, the train has traveled thousands of miles and hauled even more passengers.

It was on Sept. 11, 1940, that the first Boilermaker Special was presented to the student body at a convocation in the Hall of Music. Although a cooperative effort among two members of the class of 1907, members of the classes of 1940 and 1941, and student and alumni contributions, the initial efforts can be traced back to the Reamers after Izzy Selkowitz (P’41) submitted a letter to the Exponent advocating a mascot for the University. They took up the cause and launched a campaign to raise the funds necessary to build the mascot. “Look for the silver headgear” was the slogan on 8,000 tags featuring a print of the steaming locomotive.

By Nov. 6, 1939, $451 had been collected. Since more funds were needed, members of the Reamers journeyed to Chicago for the Purdue vs. Northwestern football game to meet with members of the Purdue Alumni Club of Chicago. As a result of that meeting, Paul Hoffman, president of the Studebaker Corp. in South Bend, donated a 1940 Studebaker chassis to the University.

Next was an offer from W.H. Winterrowd (ME’1907), president of the Purdue Alumni Association and vice president of Baldwin Locomotive Works in Pennsylvania. He agreed to build the superstructure for the mascot. With designs by J.D. Hoffman (ME’40) and through changes in the chassis by Ross Gear and Tool Co. and the Peter Anderson Motor Co. of Lafayette, the chassis arrived in Philadelphia on Sept. 3, 1939. There, the Boilermaker Special was completed.

After its dedication, the Special was used around campus and nearby areas for pep rallies and athletic events. And this tradition is still true today. Now on its fifth full-size version, it appears at all games in Ross-Ade Stadium, travels to away football games, and is a favorite at events ranging from parades to birthday parties. The Boilermaker Special made the trip to Pasadena, California, to accompany the Boilermakers to the 2001 Rose Bowl, although it was shipped the 2,100 miles to southern California -- the only time it has been shipped and not driven to an event.

And it is still the Reamer Club that is responsible for the care of the Special. The club was founded in 1923 and continues to embody the spirit of Purdue. Known for their Reamer Pots, the club members take the job of care, maintenance, and piloting of the Special very seriously. Now with the Special VII under their care, the tradition of the Boilermaker Special continues and is celebrating 78 years of representing the Old Gold and Black.

The original Boilermaker Special was presented to the student body in 1940 during a convocation in the Hall of Music. The current model, Boilermaker Special VII, was dedicated at halftime of a Sept. 3, 2011, home football game. Even though there have been five versions of the Special, two elements of VII came from I -- the bell and whistle.

Once common among many student groups, the wearing of caps largely died out in the late 1960s, although the Reamers still retain their billed pots adorned with numerous buttons.

Then: The Boilermaker Special I (circa 1941) heads north toward Ross-Ade Stadium -- almost at the point of where today's Gateway to the Future arch now stands. In the distance are the Electrical Engineering Building (far left, with the radio towers just visible), Forney Hall of Chemical Engineering and Hovde Hall (right, with the smokestack behind it). (Purdue University Archives photo)