To put it concisely: Grad students win in University contests 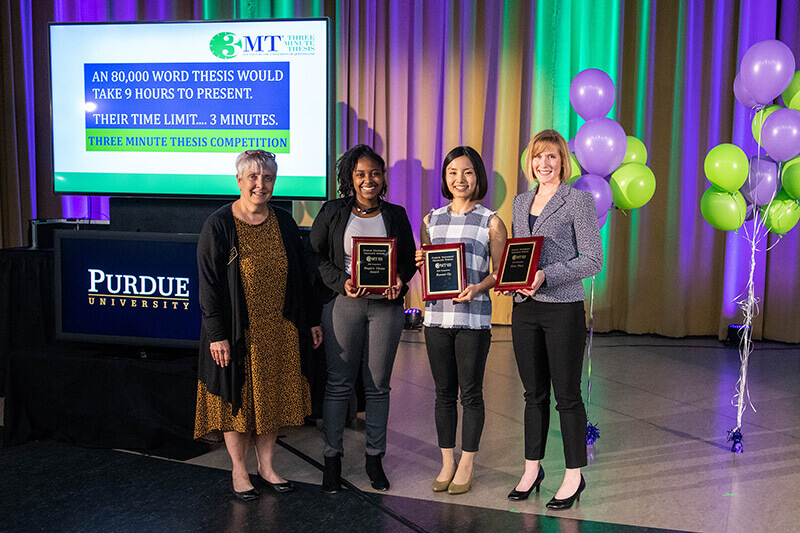 Six graduate students recently took top honors in two Purdue contests that demand brevity and quality of expression. In the Three Minute Thesis, entrants had to summarize their research efforts in 180 seconds and one slide. In Say It in 6, the task was to characterize the experience of being a graduate student in six words and an original image.

In 3MT, competitors must crystallize their message about what they are researching, knowing that a full presentation on the subject probably would take nine hours. Their telescoping of their work of three years or so allows the audience to celebrate the quality and range of graduate research at Purdue. The Three Minute Thesis competition was developed and trademarked by The University of Queensland, Australia. Purdue's winners, their prizes and their presentation titles:

First place: Sarah Mueller, Agriculture. $500. "Keeping Nitrogen Fertilizer in Our Corn and Out of Our Water."

Finals of the competition, which is hosted by the Graduate School's Office of Professional Development, took place April 17 after preliminary rounds in March and early April. Presentations were judged on communication style, comprehension and engagement. Many contestants prepared by attending specially designed communications workshops in October, January and February. More about 3MT and its process is here.

Saying Boiler Up by boiling it down may have gone even further in the six-word, one-image limit of this contest. Every successful entry will display clarity, conciseness and creativity. From among 10 categories -- Purdue, Resilience, Identity, America, Hope, Compassion, Culture, Happiness, Feminism, Diversity -- competitors chose one by which they wanted their entry to be judged. This contest and its trademarked name is based on Smith Magazine's "Six-Word Memoirs," also trademarked. Purdue's winners and their prizes:

The winners were recognized at the 3MT finals event. The six words are not quoted in this article to let readers experience the effect of seeing image and word together. These winning entries are posted here.

More about Say It in 6 is here. Finalists' submissions will be featured on the Graduate School website and promoted on posters and banners around campus.