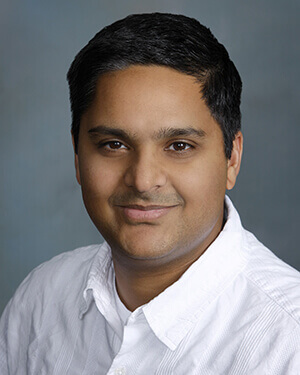 Advancing a strategic alliance forged with Purdue in 2015, Sandia National Laboratories has sent an award-winning scientist to work in Discovery Park.

Kamlesh (Ken) Patel, most recently manager of the Advanced Systems Engineering and Deployment Department at Sandia National Laboratories in Livermore, California, has moved into the Institute for Global Security and Defense Innovation as an Honorary Visiting Fellow in Discovery Park. He replaces Bill Hart, who resided on campus as the Purdue partnerships manager for Sandia from 2015 to 2017.

“Bill helped the Sandia-Purdue partnership move forward on several fronts, including collaboration on research challenges, faculty research partnerships, and exchanges for Purdue faculty and students and Sandia staff,” Garimella says. “As our relationship evolves, it is crucial to have someone from Sandia right here on campus -- and we are excited that the laboratory sent such an accomplished researcher.”

Patel, who has a PhD in analytical chemistry from the University of North Carolina at Chapel Hill, joined Sandia National Laboratories in October 2001, just weeks after the 9/11 and anthrax attacks. His career has focused on creating detection tools for bioterrorist attacks and the accidental release of pathogens.

In 2011, Patel won the Society for Laboratory Automation and Screening Innovation Award for his outstanding podium presentation, “Preparation of Nucleic Acid Libraries for Ultra High-Throughput Sequencing with a Digital Microfluidic Hub” -- a project he led to scale down and automate traditional sample preparation methods in order to identify pathogens more rapidly. The innovation received an R&D 100 Award in 2012.

In recent years as leader of the Advanced Systems Engineering and Deployment Department, Patel oversaw the design, development and deployment of engineered solutions to fundamental national security challenges in chemical, biological, radiological and nuclear threats.

“Partnerships such as the one we have with Sandia are important for advancing the University’s initiatives in defense and security innovation,” says Daniel DeLaurentis, professor of aeronautics and astronautics and inaugural director of Purdue’s Institute for Global Security and Defense Innovation. “Ken, with his deep expertise in defense technology and interdisciplinary collaborations, is the right person to have on board.”