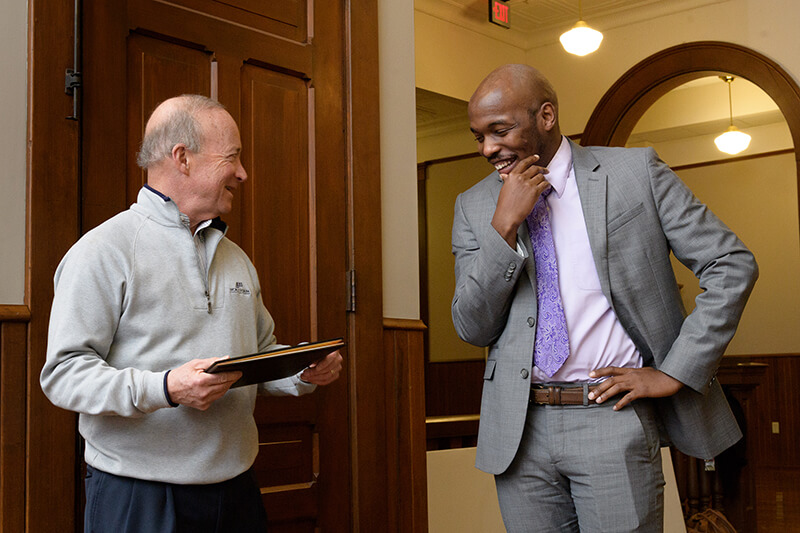 Allen is a graduate student in the Department of Youth Development and Agricultural Education. During his time at Purdue, he has organized donation drives and fundraisers to assist people across the country in times of crisis.

The One Brick Higher Award is a special recognition given to Purdue faculty, staff and students who go beyond the requirements of their role and through extraordinary effort improve the lives of those around them, increase the effectiveness of the workplace or prevent or solve problems.

“Brandon exemplifies what it means to build this university ‘one brick higher,’” Daniels said. “His drive to help others is a model for others in the Purdue community.”

In 2016, Allen worked with Purdue graduate student Amonté Martin to start a water drive for the citizens of Flint, Michigan, where residents had been exposed to water contaminated with lead. Allen and Martin delivered more than 1,000 cases and 30 one-gallon jugs of water and other supplies during three trips to Flint. In addition, they received over $6,000 in donations that they used to purchase more water for distribution in Flint.

In August, Allen began the BoilerUp4Houston drive to collect clothing and food for people in areas suffering massive damage and flooding from Hurricane Harvey. Allen set up 12 drop-off locations around campus and a GoFundMe site to collect donations. In partnership with local company Oscar Winski, he also arranged for a semi-truck to get the supplies and food to Houston. The truck delivered medical supplies, cleaning supplies, food and water for residents of the Houston area.

When Hurricane Irma hit Florida, Puerto Rico and the Virgin Islands a week later, Allen expanded his funding drive to benefit those areas as well. He finished with just over $3,000 in donations from the Purdue community.