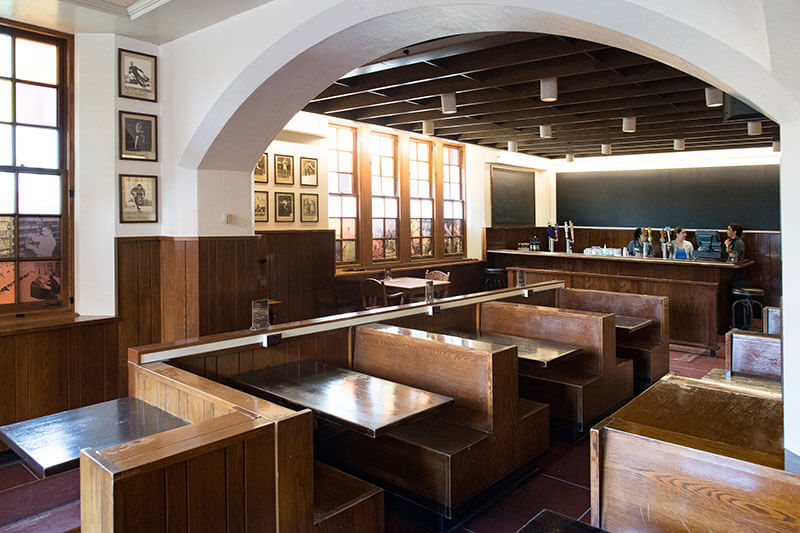 The 1869 Tap Room, located in Purdue Memorial Union, has reopened with a new permanent bar, new hours and a more inviting atmosphere.

The bar is now open 4 p.m. to 9 p.m. Monday through Saturday. It offers eight taps instead of three and an expanded menu with items from Pappy’s Sweet Shop, including a new salad and a fried green tomato BLT. Four of the eight beers on tap come from a local brewery, People’s Brewing Company. One of the beers is the new Boiler Gold-American Ale, which is only available at the Tap Room and in Ross-Ade Stadium.

The other four taps will rotate beers from local breweries across the state, including a rotating cider option. There also will be wine by the glass and domestic bottles available.

Now, students can continue to study in the room during Tap Room business hours and families with younger children can come in and enjoy the atmosphere and food, says Bryan Gutridge, associate director of catering.

“Before the remodel, we were asking underage students to leave and that just didn’t feel right,” Gutridge says. “We want people to come in and see what we are doing.”

The permanent bar, which now has seating, and a new dividing wall were both built in the Purdue wood shop.

The remodel also came with rebranding the logo, which Gutridge says now reflects more of the playful, welcoming environment offered in the Tap Room.

The 1869 Tap Room, located east of Pappy's, opened in October 2016 as a collaboration among Purdue Dining & Catering, the Department of Food Science and People's.

People's works closely with hops researchers in the College of Agriculture and fermentation specialists in the Department of Food Science. Some of the hops used by People's are locally grown and are varieties studied at Purdue.

For more information on the pub, visit https://union.purdue.edu/Tap1869/.