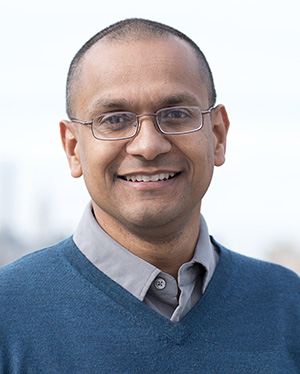 Pandit Dasa, a world-recognized expert on well-being and meditation and a former "urban monk," will lead a workshop Oct. 4 as this year's Lovell Leadership event presented by APSAC and open to staff, students and faculty.

The workshop, titled "Principles of Mindful Leadership," emphasizes a mental outlook that accepts and accounts for emotions such that they can be controlled appropriately and not intrude on relationships and tasks in unhelpful ways. The event will be at 10 a.m. until near noon in Stewart Center's Fowler Hall, running 90 minutes plus 25 minutes for questions.

Dasa, who says people generally call him Pandit, plans to spend a bit of time on meditation technique, but mostly he will bring a presentation about mindfulness — something anyone can comprehend but not so many achieve.

"Mindfulness is about being in the present moment and being aware of your emotions and how you’re feeling in that moment," he wrote recently in a blog. In an interview, he elaborated: "When you're having a conversation and your mind wanders, you don't hear. You weren't in the moment. You hadn't made yourself aware of an emotion generated earlier that was influencing your mind. We can train that."

This is crucial in leadership and team roles, he says. Leaders can affect people's lives by being mindful or not.

In a society built on competition, appreciation can be difficult, he says, asking simply, "How does it feel when you've worked really hard and you got no appreciation, or you did get appreciation? It's miserable or it's wonderful."

Dasa works to bridge the mental chasm between self and team. "One of the main things a person needs to bring to a team is the willingness to listen to the perspectives of others," he says. "Everybody has a different background." What a person is on a team comes from what the person brings to the team.

To participate well in an effective team, he says, each person needs to ask within, "How am I entering this room right now?" In some businesses and government offices worldwide where he has led workshops, team meetings can start with a mindfulness moment. When people are aware and in the moment, it's far easier to disagree gently and constructively. This mental purposefulness is why he treasures the Gandhi quotation, "Be the change you wish to see in the world."

With that in mind, he suggests that participants come to the workshop with an open mind, ready to learn a slightly new perspective on work and relationships.

This lecture is made possible by financial support from the Lovell Endowment, Human Resources and the College of Engineering.

Dasa appreciates the learning process because of his own history. Raised in a well-to-do family in the Los Angeles area, he says, he was shy and a bit pampered. A fire destroyed the family business in 1993 and they moved to Bulgaria to seek opportunity. In Bulgaria, "they were decades behind in technology, and few spoke English" and he was an older teenager rethinking what the world offers. He took up the Bhagavad Gita, an ancient and central text of Hinduism. The message he heard: Happiness doesn't come from material gain.

The family moved again, and in Jersey City, New Jersey, without experience he started an unhappy job in a loan office. In 1999, he asked and his parents allowed him to move to Mumbai, India, to live and study in a monastery. Suddenly he lived with 40 people, did basic household tasks, shared in dialogue and found great fulfillment in it all. The way of living underlined the teachings on developing personal character, which seeks humility over pride.

In 2001, Dasa moved to New York to a monastery for 15 years -- hence "the urban monk," and his life was not secluded as people often imagine of monks. A friend in a doctoral program at Columbia University invited him to help teach a vegetarian cooking class, which grew from five to now 100 people a week. He added a Bhakti ("devotion") focus with a Bhagavad Gita study and a meditation session. Despite all Columbia offered, students came seeking exactly what people sought in the monastery in India -- camaraderie and community.

People spread the word of his insights, and new opportunities continued to melt away his fears about public speaking: "At first, speaking to a group of monks was hard. Just doing it over and over helped. And keeping it personal -- my own story -- makes it easier. Believing in your message is important too. It all got better very gradually."

It may seem improbable that this shy, introspective teen became a speaker/teacher who has addressed Google, Bank of America, the World Government Summit in Dubai, a TEDx audience, numerous university groups and many others. But his message of mindfulness and his related workshops have found favor. Though developed from his religious studies and dialogues, his principles are practical and down-to-earth in the eyes of many people. The theme of mindfulness is growing in use among elite athletes and coaches too, Dasa says.