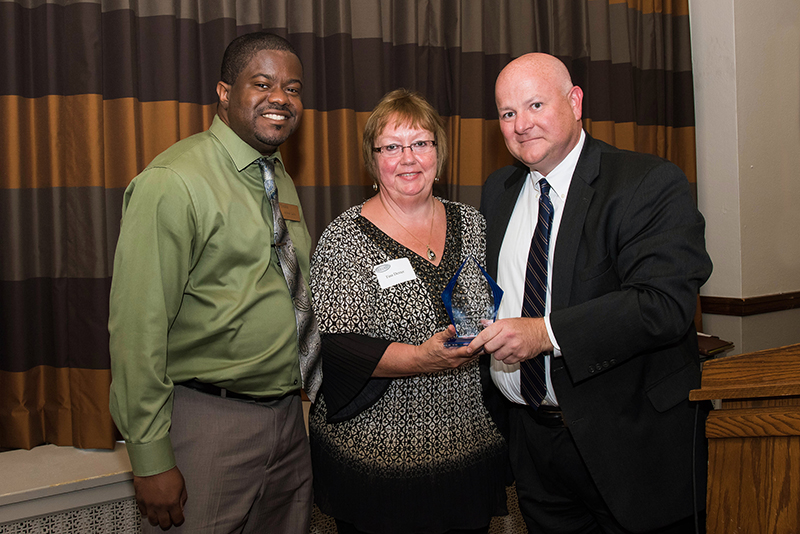 Tina Dexter and Patricia Jaynes are winners of the 2016 CSSAC Excellence Awards. The awards, which recognize clerical and service staff members who perform at outstanding levels, were announced and presented during a Clerical and Service Staff Advisory Committee luncheon Aug. 9 at Purdue Memorial Union. The luncheon also honors outgoing and new CSSAC members.

Dexter is an administrative assistant and office coordinator in the Academic and Career Advising and Student Services Office of the College of Liberal Arts, and Jaynes is a laboratory technician in the Department of Animal Sciences in the College of Agriculture. They each received a plaque and $1,500. The annual award was created by CSSAC and is sponsored by the Office of the Treasurer and Chief Financial Officer, and the Office of the Provost. A CSSAC committee selects the winners.

Andrae Sailes, director of academic and career advising in the College of Liberal Arts, cited Dexter's work ethic in his nomination letter.

"Tina is a critical thinker, attentive to details, organized, professional, culturally sensitive, has a caring personality, is dependable, is a relationship builder and has the ability to connect to and understand a wide range of audiences," he said in his letter.

"She is known as the rock of our office. One of many examples of this is just a month ago. We had an adviser pass away after an extended illness. Tina was amazing in making sure the students under that adviser did not skip a beat. She got them moved to other advisers, coordinated the family getting her belongings, coordinated a collection for the family to help with funeral costs and she made sure the entire staff stayed mentally healthy while coping with the loss." 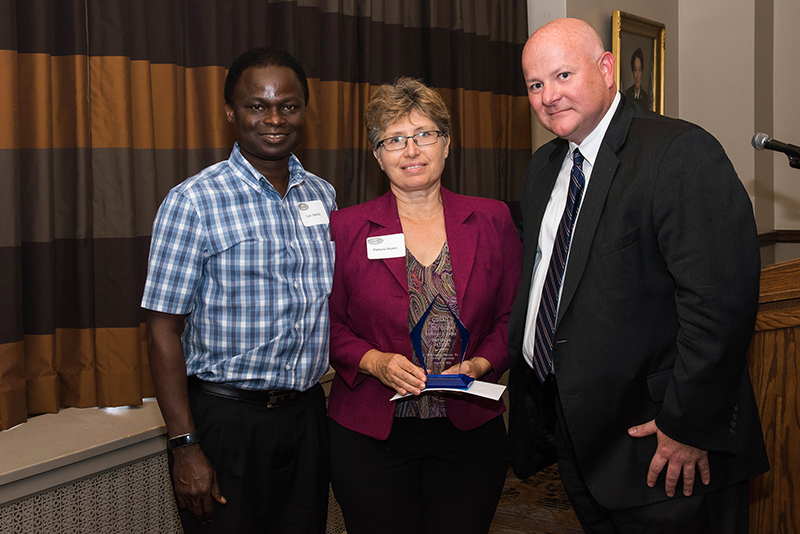 Sailes said Dexter was not asked to do any of those things but did them because, "it was the right thing to do. Tina went above and beyond her duties, was a true leader during this tough time, showed much initiative, and a very caring heart."

Dexter said she was moved to receive the honor.

"It's so nice for the clerical staff to be recognized and I'm deeply humbled by this award," she said. "I'd like to thank Andrae and Lori Sparger (chief operating officer for the College of Liberal Arts) for nominating me. I don't think I do anything special. I just support staff and faculty as they support the students."

In nominating Jaynes for the award, Layi Adeola, professor of animal sciences, said she has been an integral contributor to poultry and swine research efforts in the department.

"She shows initiative and has made a lot of workplace efficiency improvements and has been able to save significant costs in analyses as well as lab supplies," Adeola said. "One of her greatest pleasures is sharing the joys and tribulations of animal research with students, striving to support their academic careers by providing a lab environment that focuses on technical training of nutritional analysis and animal trials."

"Over the past 15 years, she has worked with numerous graduate students who have earned advanced degrees and provided exemplary customer service to visiting researchers from around the world. She consistently goes above and beyond the job description and expectations in her work and conduct."

Jaynes credited her co-workers for the award.

"I'd like to acknowledge that excellence is not achieved by one individual. It takes many other people, and I accept this award while recognizing all of those people who made it possible," she said.