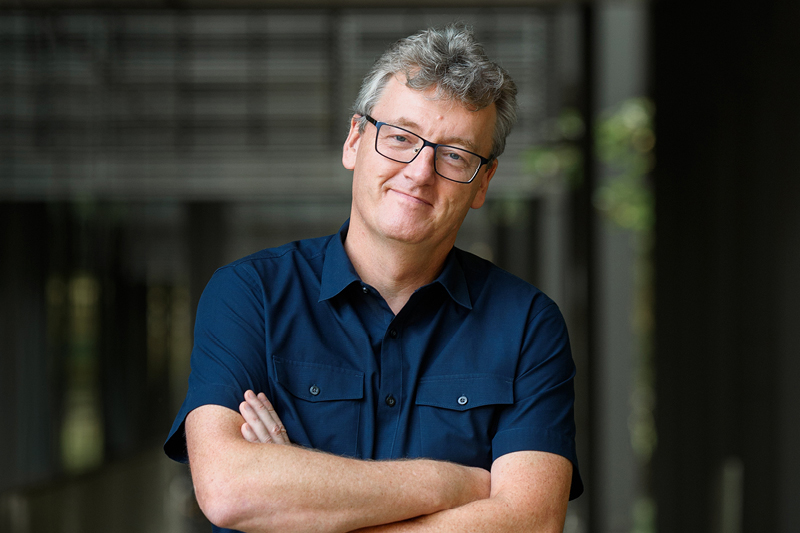 WEST LAFAYETTE, Ind. — Renowned Princeton University professor and entrepreneur David W.C. MacMillan, who shared the 2021 Nobel Prize in Chemistry for his groundbreaking work on catalysis, will join Purdue University President Mung Chiang for a conversation at the first Presidential Lecture Series event of 2023 on Feb. 13.

The discussion with MacMillan, the James S. McDonnell Distinguished University Professor of Chemistry at Princeton, is at 6 p.m. Feb. 13 in Stewart Center’s Fowler Hall. The event, which is free and open to the public, is titled “The Path to Invention and Discovery in Catalysis.” It also is the first Presidential Lecture Series event hosted by Chiang, whose administration plans to continue the lecture series launched in 2014 by his predecessor, Purdue President Emeritus Mitch Daniels.

“To continue enhancing the vibrancy of intellectual life on campus and to celebrate the scholarly impact of our colleagues, we are organizing various events with broad participation,” Chiang said. “The Presidential Lecture Series will continue, and I would like to warmly welcome my former colleague David MacMillan, a groundbreaking scholar at the pinnacle of excellence in research and in entrepreneurial impact, to Purdue and West Lafayette.”

The Scottish-born MacMillan shared the 2021 Nobel Prize in Chemistry with organic chemist Benjamin List from Germany. MacMillan and List had developed a type of catalysis in 2000 that built on small organic molecules. Using a process called asymmetric organocatalysis, their toolkit now makes it easier to produce asymmetric molecules — chemicals that exist in two versions where, like our human hands, one is a mirror image of the other.

Catalysts are substances that accelerate chemical reactions without becoming part of the final product, an especially important factor for chemists in their efforts to construct molecules. When they are being built, two different molecules actually can form as mirrored images. Chemists often want only one of these mirror images, particularly when producing medicines, but it has been difficult to find efficient methods to do this.

The pioneering process that MacMillan and List developed is helping solve this scientific challenge, paving the way for discovering new drugs and even making molecules that can capture light in solar cells. Chemistry also is made more environmentally friendly because of their innovation.

“Building molecules is a difficult art. Benjamin List and David MacMillan are awarded the Nobel Prize in Chemistry 2021 for their development of a precise new tool for molecular construction: organocatalysis. This has had a great impact on pharmaceutical research, and has made chemistry greener,” the Royal Swedish Academy of Sciences noted in announcing the award.

For his Purdue discussion, MacMillan will highlight the advent and development of asymmetric organocatalysis in his laboratory. As an overview, he will explore concepts of chemical reactivity, catalysis and the asymmetry of organic molecules. He also will examine the impact of organocatalysis on modern synthetic chemistry and explore the real-world applications of the technology.

“We will discuss the ways in which organocatalysis created a bridge to the development of a new field of research in our lab: visible light photoredox catalysis,” MacMillan said in the abstract explaining his talk of the field of photochemistry that uses single-electron transfer. “Last, we will look to the future and consider how organocatalysis may continue to impact scientific research and society.”

After his Nobel win, MacMillan used his share of the $1.14 million prize to establish the May and Billy MacMillan Foundation. Created to honor his parents, the foundation supports educational opportunities for financially disadvantaged students in Scotland. MacMillan also contributed any money for talks he gave during 2022 to the foundation.

While at Harvard University in the late 1990s, MacMillan had been working with metal catalysts. But the types used in his research were rarely embraced by industry. The problem: While the oxygen-free and moisture-free conditions demanded by some metal catalysts were possible to achieve in the lab, this was much more difficult at large scales.

MacMillan studied chemistry as an undergraduate at the University of Glasgow. He then came to the United States in 1990, where he pursued his doctoral studies at the University of California, Irvine. Having earned a PhD, he took a postdoctoral position at Harvard University in 1996. There, MacMillan’s began his research focus on catalysis.