The fountain of life: Water droplets hold the secret ingredient for building life 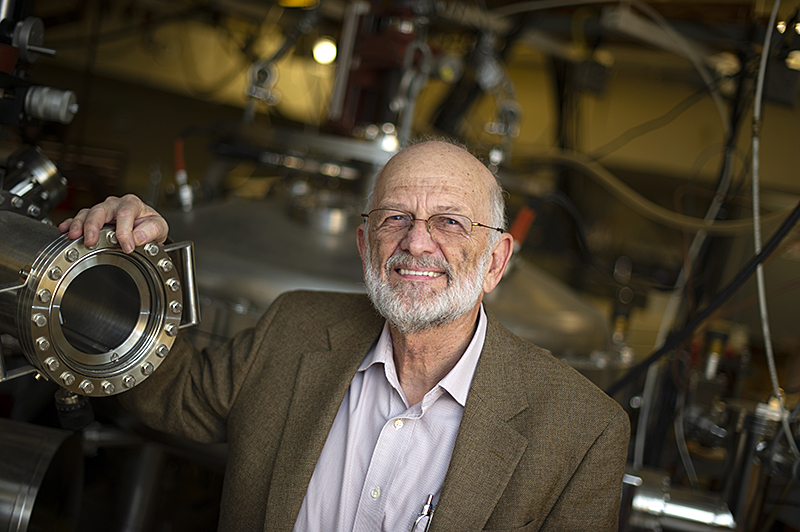 Chemists discover key to early Earth chemistry, which could unlock ways to speed up chemical synthesis for drug discovery

WEST LAFAYETTE, Ind. — Purdue University chemists have uncovered a mechanism for peptide-forming reactions to occur in water — something that has puzzled scientists for decades.

“This is essentially the chemistry behind the origin of life,” said Graham Cooks, the Henry Bohn Hass Distinguished Professor of Analytical Chemistry in Purdue’s College of Science. “This is the first demonstration that primordial molecules, simple amino acids, spontaneously form peptides, the building blocks of life, in droplets of pure water. This is a dramatic discovery.”

This water-based chemistry, which leads to proteins and so to life on Earth, could also lead to the faster development of drugs to treat humanity’s most debilitating diseases. The team’s discovery was published in the journal Proceedings of the National Academy of Sciences.

For decades scientists have theorized that life on Earth began in the oceans. The chemistry, however, remained an enigma. Raw amino acids — something that meteorites delivered to early Earth daily — can react and latch together to form peptides, the building blocks of proteins and, eventually, life. Puzzlingly, the process requires the loss of a water molecule, which seems highly unlikely in a wet, aqueous or oceanic environment. For life to form, it needed water. But it also needed space away from the water.

Cooks, an expert in mass spectrometry and early Earth chemistry, and his team have uncovered the answer to the riddle: “Water isn’t wet everywhere.” On the margins, where the water droplet meets the atmosphere, incredibly rapid reactions can take place, transforming abiotic amino acids into the building blocks of life. Places where sea spray flies into the air and waves pound the land, or where fresh water burbles down a slope, were fertile landscapes for life’s potential evolution.

“The rates of reactions in droplets are anywhere from a hundred to a million times faster than the same chemicals reacting in bulk solution,” Cooks said.

The rates of these reactions make catalysts unnecessary, speeding up the reactions and, in the case of early Earth chemistry, making the evolution of life possible. Understanding how this process works has been the goal of decades of scientific research. The secret of how life arose on Earth can help scientists understand why it happened and inform the search for life on other planets, or even moons.

Understanding how amino acids built themselves up into proteins and, eventually, life-forms revolutionizes scientists’ understanding of chemical synthesis. That same chemistry could now aid synthetic chemists in speeding the reactions critical to discovering and developing new drugs and therapeutic treatments for diseases.

“If you walk through an academic campus at night, the buildings with the lights on are where synthetic chemists are working,” Cooks said. “Their experiments are so slow that they run for days or weeks at a time. This isn’t necessary, and using droplet chemistry, we have built an apparatus, which is being used at Purdue now, to speed up the synthesis of novel chemicals and potential new drugs.”

Purdue University is a top public research institution developing practical solutions to today’s toughest challenges. Ranked in each of the last five years as one of the 10 Most Innovative universities in the United States by U.S. News & World Report, Purdue delivers world-changing research and out-of-this-world discovery. Committed to hands-on and online, real-world learning, Purdue offers a transformative education to all. Committed to affordability and accessibility, Purdue has frozen tuition and most fees at 2012-13 levels, enabling more students than ever to graduate debt-free. See how Purdue never stops in the persistent pursuit of the next giant leap at https://stories.purdue.edu


Note to journalists: A video of Cooks discussing his research is available to all AP Video Hub subscribers.