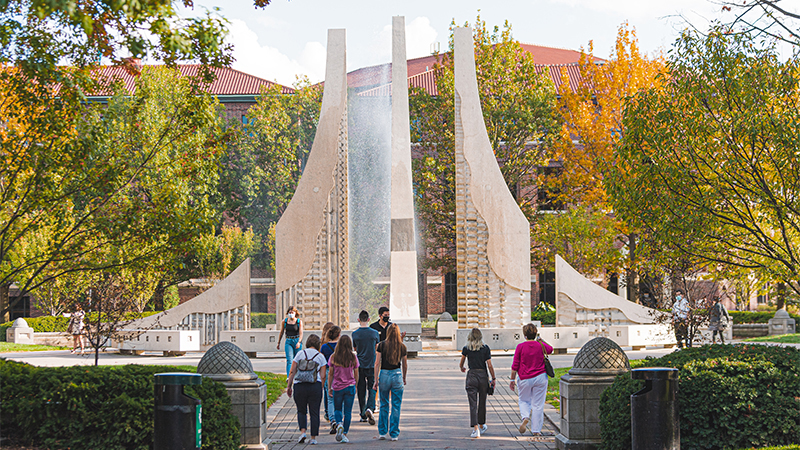 WEST LAFAYETTE, Ind. – Purdue University’s Voter Engagement Action Plan aimed at promoting student registration and turnout during the 2020 election was selected as the best among its Big Ten peers in the ALL IN Campus Democracy Challenge.

The award for the Big Ten’s Best Action Plan, resulting in a 20-percentage point jump in student voter turnout to 67% in the 2020 election, was announced and presented to Purdue this week as part of several virtual ceremonies. Twelve of the 14 Big Ten universities submitted action plans designed to spur student registration and voting in 2020.

Purdue also received a silver rating for Excellence in Student Voter Engagement in achieving an overall voting rate of 60%-69% during the 2020 presidential election.

“I enrolled us in the All IN Challenge with high hopes, but I should have known that Boilermakers would find a way to surpass them,” said Purdue President Mitch Daniels, a national ALL IN Challenge spokesperson who was convinced Purdue could play a major role in promoting student voter registration and turnout in the 2020 election through this initiative. “We like winning Big Ten championships around here, and this is one to be very proud of.”

In its 12-page action plan, a document drafted in March 2020, the PurdueVotes Coalition outlined strategies and goals to boost registration for the campus based on the 2012, 2014, 2016 and 2018 elections, according to Melissa Gruver, associate director in the Civic Engagement & Leadership Development office, who co-led Purdue’s ALL IN Challenge efforts.

The 10-member core team met during the summer of 2020. Additional campus team members were added in the fall to form the 40-member PurdueVotes Coalition, which met virtually because of the pandemic to begin executing the action plan’s goals. Gruver said those goals centered on increasing the student voter registration and overall voting rate from the 2016 election, particularly among Purdue’s underrepresented minority student population.

“I am proud of our entire Purdue team, along with the value that our students placed on voting in the general election – and jumping 20 percentage points from the last presidential election, particularly during the COVID-19 pandemic,” she said.

Gruver said results of her team’s persistent and strategic efforts in promoting student voter turnout are just as meaningful as the recognition from the ALL IN Campus Democracy Challenge.

“We worked hard, but we also worked smart. We placed a special emphasis on educating our students about how voting works, especially for those who were registered in their home county or state but are here on campus on Election Day. The process can be confusing,” Gruver said.

“It’s exciting to see Purdue’s student voter registration strategy acknowledged by the ALL IN committee as the best in the Big Ten.”

Purdue’s overall student voting rate — at 67% in 2020, vs. 47% just four years earlier — also was slightly higher than the 66% rate for participating ALL IN institutions, a significant accomplishment, Gruver said. Additionally, Purdue’s 2020 action plan sparked an increase in the:

Detailed statistics are available in Purdue’s 2020 National Study of Learning, Voting and Engagement report – known as the NSLVE campus report – as part of the ALL IN Campus Democracy Challenge.

Daniels announced in July 2020 that Purdue and 160 other college presidents and chancellors, including seven in the Big Ten, were committing to full student voter registration and participation in the 2020 election cycle through the ALL IN Campus Democracy Challenge.

By signing the ALL IN pledge, Purdue also committed to ensuring that all eligible students are able to register to vote and cast informed ballots in the 2020 election and beyond. Further, Purdue pledged to foster a campus culture that supported nonpartisan student civic learning, political engagement and student voter participation.

The ALL IN Campus Democracy Challenge is a nonpartisan, national initiative recognizing and supporting campuses as they work to increase nonpartisan democratic engagement and full student voter participation. The effort encourages higher education institutions to help students form the habits of active and informed citizenship and make democratic participation a core value on their campus. More than 830 universities and colleges across the nation, enrolling over 9 million students, participated in the challenge during the 2020 election cycle.