Purdue partners with U.S. Navy to expand opportunities for underrepresented minorities in STEM 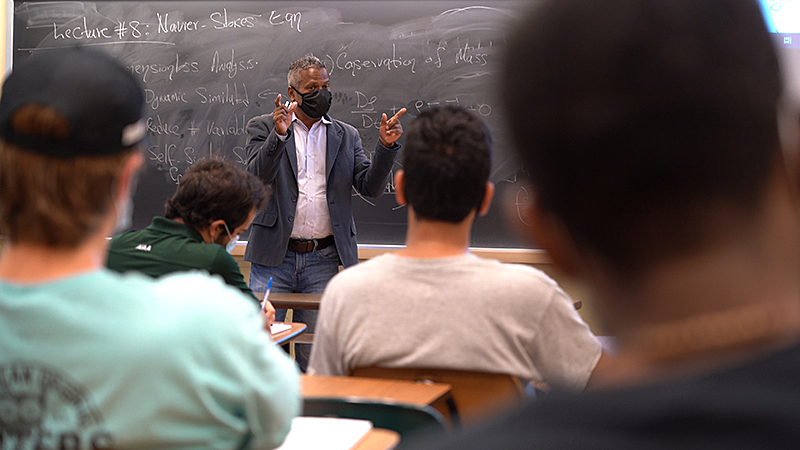 Luciano Castillo, Purdue’s Kenninger Professor of Renewable Energy and Power Systems in Mechanical Engineering, has been working hard to increase the number of Black and Hispanic students who pursue STEM fields. His latest initiative partners Purdue University with the U.S. Navy and a consortium of minority-serving institutions. (Purdue University photo/Jared Pike)

WEST LAFAYETTE, Ind. — A new partnership between Purdue University, the U.S. Navy’s Office of Naval Research (ONR), and a consortium of minority-serving institutions is working to grow the number of underrepresented minority researchers in STEM fields.

African Americans and Hispanics comprise 32% of the country’s population, but 7% of the science and engineering workforce, and 11% of U.S. academic faculty. Studies show that underrepresented minority students are just as likely as their white peers to enter STEM fields, but that there are significant gaps in the persistence rate of minority students completing these fields.

“We call this a quiet crisis,” said Luciano Castillo, Purdue’s Kenninger Professor of Renewable Energy and Power Systems in Mechanical Engineering, the program’s principal investigator. “It’s not just a matter of trying to raise numbers. Minority students feel that they don’t have the tools to succeed in science and engineering careers. We want to give these students every available opportunity to overcome those barriers, to solve the big problems of tomorrow.”

The proposed program, called Blue Integrated Partnerships (BIP), has received a $2.8 million grant from ONR’s Mission Capable, Persistent and Survivable Platforms Department. In addition to Purdue, partners will include Tuskegee University; the University of Puerto Rico and its 11 campuses; the U.S. Naval Academy; NASA; and a growing list of industry partners, government agencies and universities.

BIP’s aim is to recruit underrepresented minority students to participate in research projects and workshops at Purdue and other institutions, with the goal of preparing them for the next step in their academic careers. “We’ve already seen success in events like the Latinx Trailblazers in Engineering and Black Trailblazers in Engineering,” Castillo said. “When minority students get this kind of focused attention on a specific goal, they thrive.”

The consortium also intends to follow up that success with a strong network of mentorship and personal support, offering students the chance to personally interact with leaders from industry, academia, military and other STEM fields. By creating such a nurturing environment, they hope to increase the chance that underrepresented minority students will stay in STEM and become the successful researchers of the future.

“We want this program to become a super-pipeline,” Castillo said. “K-12 students will learn what it takes to attend a STEM school like Purdue. Undergraduate students at minority-serving institutions learn how to conduct world-class research. Graduate students learn what it takes to become a transformational scientist and leader. This is how we change the story and bring true diversity to academia, which in turn will change the world.”