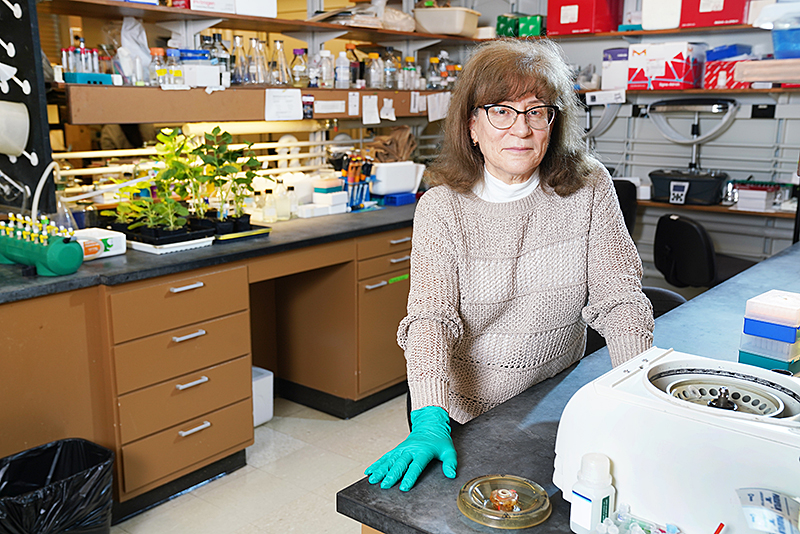 Natalia Dudareva, Distinguished Professor of Biochemistry in Purdue's College of Agriculture, stands in her laboratory. Dudareva led a team of researchers that mapped the biosynthetic pathway of an anti-cancer compound found in oregano and thyme, opening the door to potential pharmaceutical use. (Purdue Agricultural Communications photo/Tom Campbell)

WEST LAFAYETTE, Ind. — Thyme and oregano possess an anti-cancer compound that suppresses tumor development, but adding more to your tomato sauce isn't enough to gain significant benefit. The key to unlocking the power of these plants is in amplifying the amount of the compound created or synthesizing the compound for drug development.

Researchers at Purdue University achieved the first step toward using the compound in pharmaceuticals by mapping its biosynthetic pathway, a sort of molecular recipe of the ingredients and steps needed.

"These plants contain important compounds, but the amount is very low and extraction won't be enough," said Natalia Dudareva, a Distinguished Professor of Biochemistry in Purdue's College of Agriculture, who co-led the project. "By understanding how these compounds are formed, we open a path to engineering plants with higher levels of them or to synthesizing the compounds in microorganisms for medical use. "It is an amazing time for plant science right now. We have tools that are faster, cheaper and provide much more insight. It is like looking inside the cell; it is almost unbelievable." 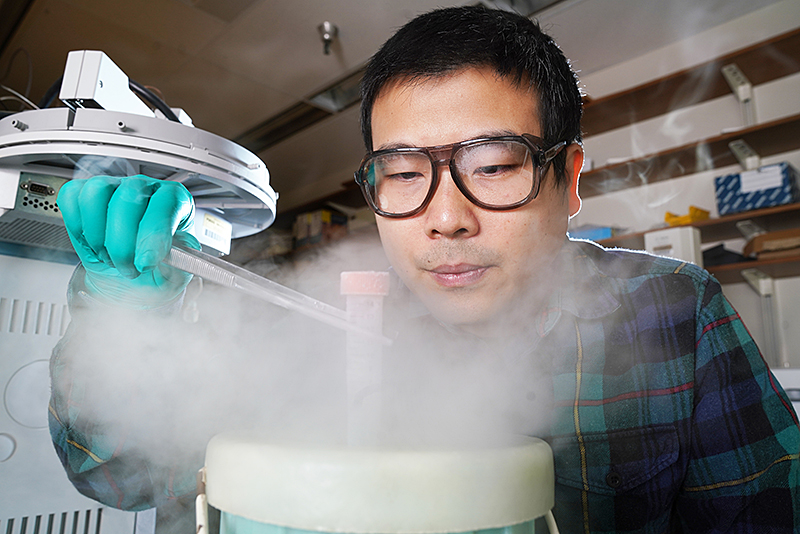 Pan Liao, a postdoctoral researcher at Purdue, works in the Dudareva laboratory. Liao was first author of a paper describing the biosynthesis of thymol, carvacrol and thymohydroquinone; molecular compounds with medicinal properties found in some herbs. (Purdue University photo/Tom Campbell). Download image

Thymol, carvacrol and thymohydroquinone are flavor compounds in thyme, oregano and other plants in the Lamiaceae family. They also have antibacterial, anti-inflammatory, antioxidant and other properties beneficial to human health. Thymohydroquinone has been shown to have anti-cancer properties and is particularly of interest, said Dudareva, who also is director of Purdue's Center for Plant Biology.

In collaboration with scientists from Martin Luther University Halle-Wittenberg in Germany and Michigan State University, the team uncovered the entire biosynthetic pathway to thymohydroquinone, including the formation of its precursors thymol and carvacrol, and the short-lived intermediate compounds along the way.

The findings alter previous views of the formation of this class of compounds, called phenolic or aromatic monoterpenes, for which only a few biosynthetic pathways have been discovered in other plants, she said. The work is detailed in a paper published in the Proceedings of the National Academy of Sciences.

"These findings provide new targets for engineering high-value compounds in plants and other organisms," said Pan Liao, co-first author of the paper and a postdoctoral researcher in Dudareva's lab. "Not only do many plants contain medicinal properties, but the compounds within them are used as food additives and for perfumes, cosmetics and other products."

Now that this pathway is known, plant scientists could develop cultivars that produce much more of the beneficial compounds or it could be incorporated into microorganisms, like yeast, for production. The latter method involves a fermentation process to obtain the valuable compounds, as is true for many plant-based products, he said.

The fermentation process is so important to food and beverage, pharmaceutical, and biofuels production that Purdue now offers a fermentation science major.

A $5 million grant from the National Science Foundation supported the research. Using RNA sequencing and correlation analysis, the team screened more than 80,000 genes from plant tissue samples and identified the genes needed for thymohydroquinone production. Based on what was known about the compound structure and through metabolite profiling and biochemical testing, the team identified the biosynthetic pathway.

"The intermediate formed in the pathway was not what had been predicted," Liao said. "We found that the aromatic backbone of both thymol and carvacrol is formed from γ-terpinene by a P450 monooxygenase in combination with a dehydrogenase via twounstable intermediates, but not p-cymene, as was proposed."

More pathways are being discovered now because of the ability to use RNA sequencing to perform high-throughput gene expression analysis, Dudareva said.

The results of this research also will be useful for biochemistry and plant sciences research of other species of plants, she said.

"We, as scientists, are always comparing pathways in different systems and plants," Dudareva said. "We are always in pursuit of new possibilities. The more we learn, the more we are able to recognize the similarities and differences that could be key to the next breakthrough."

The biosynthesis of thymol, carvacrol, and thymohydroquinone in Lamiaceae proceeds via cytochrome P450s and a short-chain dehydrogenas

Thymol and carvacrol are phenolic monoterpenes found in thyme, oregano and several other species of the Lamiaceae. Long valued for their smell and taste, these substances also have antibacterial and anti-spasmolytic properties. They are also suggested to be precursors of thymohydroquinone and thymoquinone, monoterpenes with anti-inflammatory, antioxidant and anti-tumor activities. Thymol and carvacrol biosynthesis has been proposed to proceed by the cyclization of geranyl diphosphate to γ-terpinene followed by a series of oxidations via p-cymene. Here we show that γ-terpinene is oxidized by cytochrome P450 monooxygenases (P450s) of the CYP71D subfamily to produce unstable cyclohexadienol intermediates, which are then dehydrogenated by a short-chain dehydrogenase/reductase (SDR) to the corresponding ketones. The subsequent formation of the aromatic compounds occurs via keto-enol tautomerisms. Combining these enzymes with γ-terpinene in in vitro assays or in vivo in Nicotiana benthamiana yielded thymol and carvacrol as products. In the absence of the SDRs, only p-cymene was formed by rearrangement of the cyclohexadienol intermediates. The nature of these unstable intermediates was inferred from reactions with the γ-terpinene isomer limonene and by analogy to reactions catalyzed by related enzymes. We also identified and characterized two P450s of the CYP76S and CYP736A subfamilies that catalyze the hydroxylation of thymol and carvacrol to thymohydroquinone when heterologously expressed in yeast and N. benthamiana. Our findings alter previous views of thymol and carvacrol formation, identify the enzymes involved in the biosynthesis of these phenolic monoterpenes and thymohydroquinone in the Lamiaceae, and provide new targets for metabolic engineering of high-value terpenes in plants.