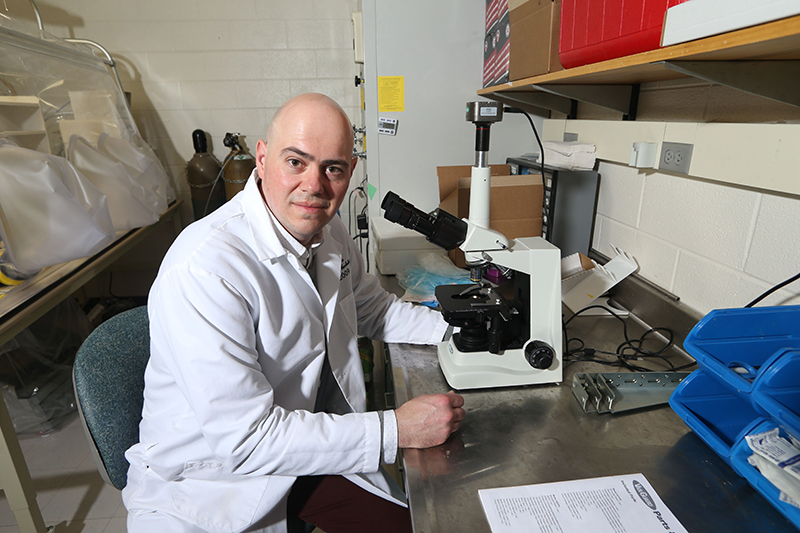 WEST LAFAYETTE, Ind. — Microorganisms can be neighborly – when breaking down complex plant fibers they divide the labor and are able to sustain a diverse community, as each member gets its share of food. Understanding how they are able to adapt in this way could lead to improved biofuels processes and is the focus of a new $2 million project at Purdue University.

“One would expect microorganisms to compete against each other as they do for simple resources, with one eventually crowding out the others, but in communities consuming complex substrates, like sorghum fibers, we see microbial diversity maintained,” said Steve Lindemann, associate professor of food science at Purdue University, who leads the project. “We’ve seen that microorganisms change the enzymes they produce depending on their neighbors and the food source they are consuming. Understanding this behavior could lead to a way to engineer more stable and productive systems for processes that rely on microbes to convert plant material into useful products, like biofuels production and other types of food and industrial fermentation.”

The National Science Foundation funded the project, which aims to uncover the mechanisms behind the division of labor among microorganisms, single-celled living organisms, including bacteria and fungi, which are too small to be seen without a microscope and naturally live in communities. The team also will develop a theory that describes how microbial interactions maintain diversity and influence the productivity and stability of a community.

“Diversity of microbial communities is important to many microbial ecosystems, including those in the human gut as well as animal, plant and environmental microbiomes,” said Lindemann, who also is a member of Purdue’s Whistler Center for Carbohydrate Research. “A better understanding of the mechanisms that maintain diversity in these environments is important.”

Lindemann has studied microbial interactions for more than a decade. He and his team hypothesize that the complexity of the consumed fiber allows the microorganisms to change their gene expression to specialize in the breakdown of specific structural features of the fiber. With microorganisms focused on breaking down different parts of the fiber, competition among them is reduced.

Like a production line where each team of workers focuses on only one part of the total job, microbial division of labor may also increase productivity and efficiency. However, many of the biomass to biofuels processes have been engineered around a single type of microorganism and require pretreatment to breakdown the biomass into simple substrates before the microorganism acts on it, Lindemann said.

“Perhaps we could modify the process and restructure the substrate in a way that encourages diversity and division of labor, and even develops the community of microbes that is best for the job,” he said. “First we need to understand the rules that govern this behavior.”

A better understanding of diverse microbial communities and mechanisms behind different behaviors also could inform how to maintain and restore healthy microbiomes in human and animal guts, as well as plant-associated communities, Lindemann said.

“We need to make higher-level connections to understand these rules of life, like the NSF is pursuing, to possibly get to a point where we could modify and engineer natural microbial communities to improve the environment,” he said. “Microbes mediate all of the major element cycles on this planet – perhaps we can use their division of labor to manage communities in places like wetlands to sink more carbon and produce fewer greenhouse gases.”

The project also will help build the national microbiome workforce through educational initiatives, including a course in multi-omic analysis of microbiomes offered at Purdue, a public exhibition of microbial ecology at Purdue’s Spring Fest and development of instructional modeling and simulation tools for courses at the University of Nebraska-Lincoln and the Multiscale Microbial Dynamics Modeling Summer School hosted by the Department of Energy’s Environmental Molecular Sciences Laboratory, as well as a gamified version for instructional purposes at multiple education levels.

Note to journalists:  Photos of Steve Lindemann are available on Google Drive.