In plant stress response, one protein lures, binds its own killer 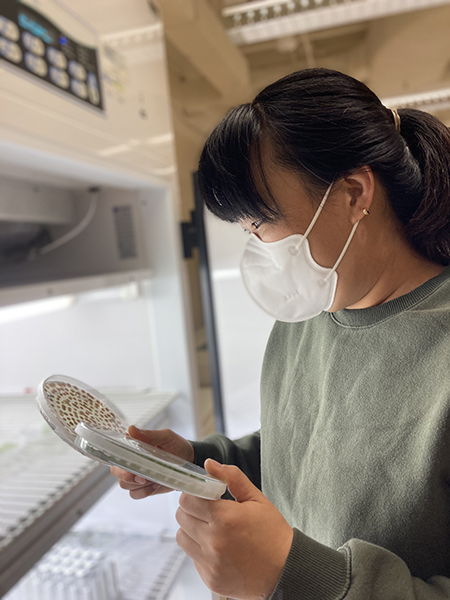 WEST LAFAYETTE, Ind. — Like the plot of a mystery novel, research has found a twist in the way plants cannibalize their own cells to survive under stress.

In response to drought, cold, lack of sunlight and other stress, cellular proteins interact in different ways to help a plant survive. A primary protective act is the destruction and recycling of some of the plant’s own cellular materials into what is needed for others.

A Purdue University-led research team has identified proteins involved in this protective process and discovered how they act upon each other. A better understanding of these mechanisms could lead to ways to help plants withstand severe conditions. 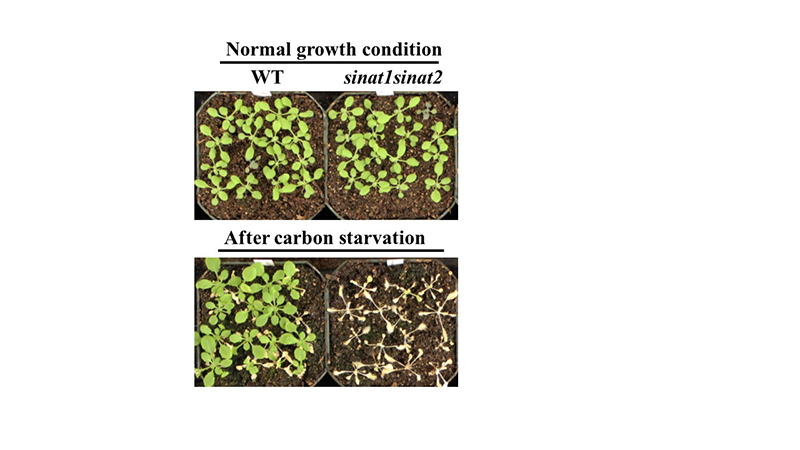 “We identified three proteins involved in this process and discovered a surprising co-regulation mechanism,” said Gyeong Mee Yoon, associate professor of botany and plant pathology at Purdue, who led the study. “One protein, called ACC synthases (ACS), an enzyme regulating ethylene biosynthesis, recruits the two other proteins and acts like a scaffold, or glue holding them together. Interestingly, the two proteins are ones that under normal growth conditions break down ACS. It lures its own killers into a bind that causes them to degrade each other instead.”

Yoon also found that a byproduct of the process is an increase in the plant hormone ethylene. The role of ethylene in ripening produce in a fruit bowl or refrigerator may be familiar, but it also influences plant growth, development and plant stress responses. It has been a key target of research, she says.

“We know that ethylene is somehow involved in the stress response and autophagy, or the destruction and recycling of cellular materials, but we don’t know exactly how it is involved,” said Yoon, who also is a member of Purdue’s Center for Plant Biology and part of Purdue’s Next Moves plant sciences initiative. “This is one clue as we seek to solve the mystery and to understand ethylene biosynthesis and signaling in autophagy regulation.” 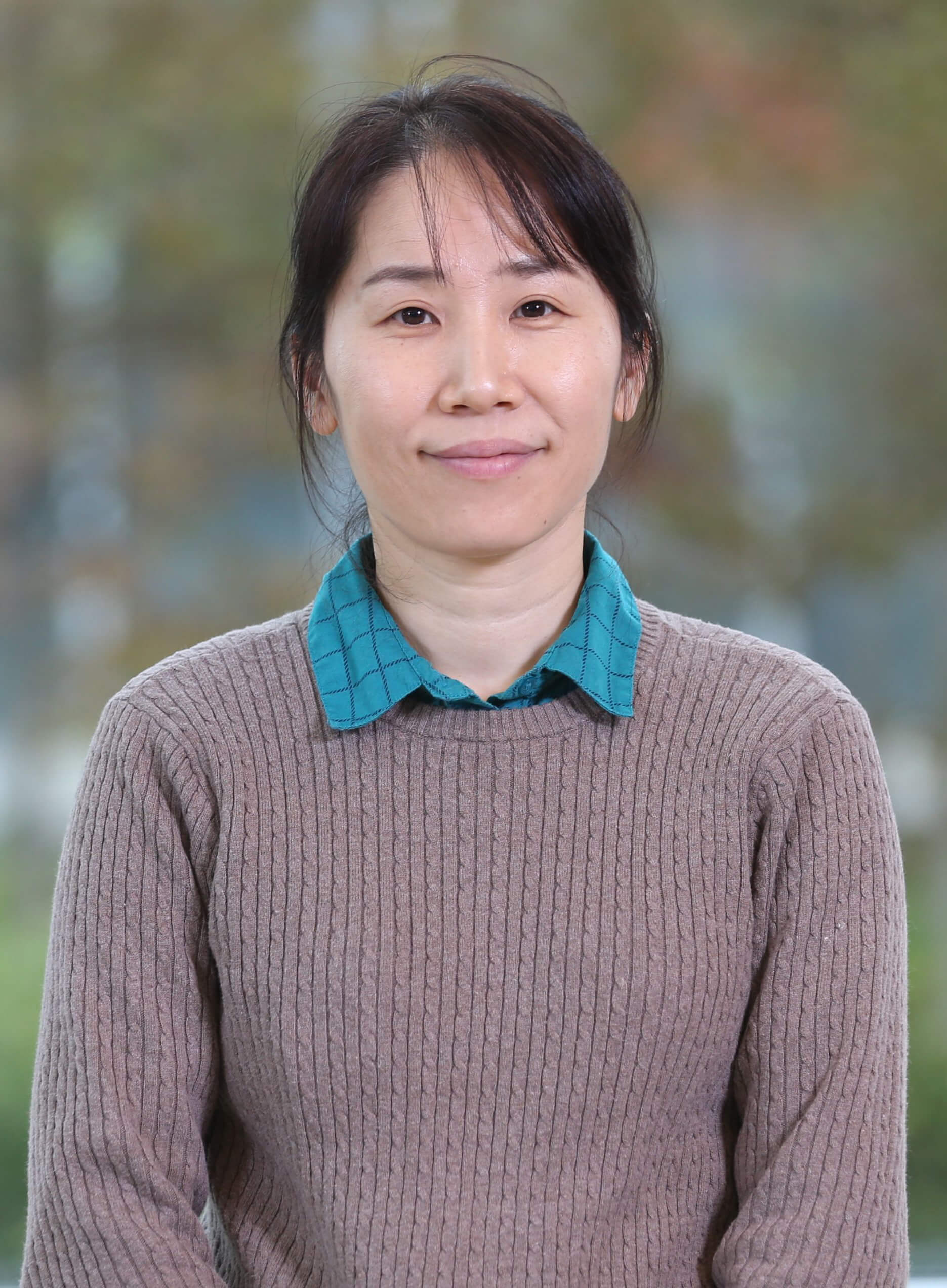 The team used Arabidopsis as the plant model. A paper detailing the results is published in the journal the Proceedings of the National Academy of Sciences or PNAS.

The team created a carbon-deficient environment for the plants, similar to what would happen without adequate sunlight. Without sunlight, plants cannot perform photosynthesis to create carbon needed for growth.

When starved for carbon, it seems the plant activates the brassinosteroid signaling pathway, Yoon said. This signaling activates an additional protein, called 14 3 3, that enables ACS to attract its enemies and make them degrade each other.

The two proteins lured to ACS are categorized as E3 ligases, and called Seven-in Absentia (SINAT) and Ethylene overproducer 1-like 2 (EOL2). These ligases normally do not interact with each other and both degrade ACS. Through this stress-response process where ACS binds the two ligases, the level of ACS in the cell increases. The increase in ACS in turn increases synthesis of ethylene, she said.

By inhibiting the binding of ACS and the E3 ligases, the team was able to disrupt the stress-response process. They found that if the co-regulation of these proteins is disrupted, the plants cannot survive carbon starvation, Yoon says.

This was the first time ACS has been shown to act as a scaffold, and it could turn out to be what plant geneticists call a “moonlighting” protein, Yoon said.

“This is evidence ACS could be a ‘moonlighting’ protein, where it performs more than one function, but we need to know more,” Yoon said. “Perhaps it serves as a scaffold to bring together proteins in other pathways. It may be more important than what we know so far, and we plan to investigate this.”

Ethylene influences plant growth, development, and stress responses via crosstalk with other phytohormones; however, the underlying molecular mechanisms are still unclear. Here, we describe a mechanistic link between the brassinosteroid (BR) and ethylene biosynthesis, which regulates cellular protein homeostasis and stress responses. We demonstrate that as a scaffold, 1-aminocyclopropane-1-carboxylic acid (ACC) synthases (ACS), a rate-limiting enzyme in ethylene biosynthesis, promote the interaction between Seven-in-Absentia of Arabidopsis (SINAT), a RING-domain containing E3 ligase involved in stress response, and ETHYLENE OVERPRODUCER 1 (ETO1) and ETO1-like (EOL) proteins, the E3 ligase adaptors that target a subset of ACS isoforms. Each E3 ligase promotes the degradation of the other, and this reciprocally antagonistic interaction affects the protein stability of ACS. Furthermore, 14–3-3, a phosphoprotein-binding protein, interacts with SINAT in a BR-dependent manner, thus activating reciprocal degradation. Disrupted reciprocal degradation between the E3 ligases compromises the survival of plants in carbon-deficient conditions. Our study reveals a mechanism by which plants respond to stress by modulating the homeostasis of ACS and its cognate E3 ligases.