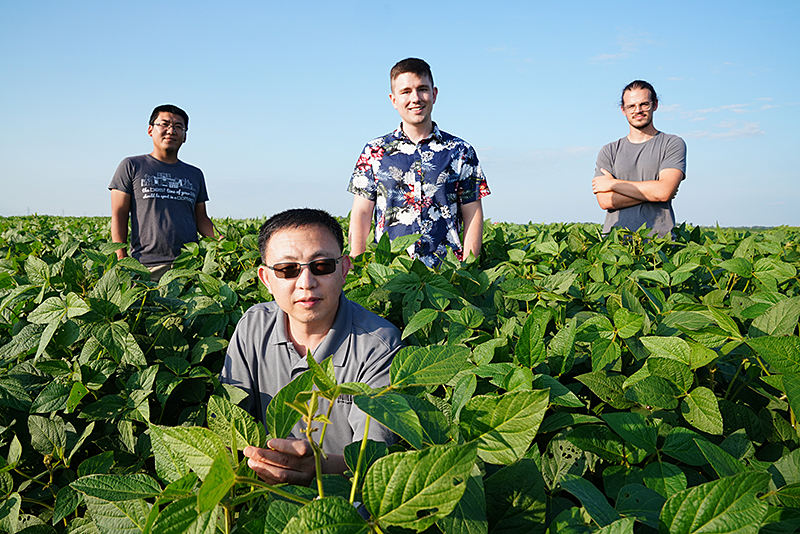 Jianxin Ma, professor of agronomy at Purdue University, holds the leaves of a soybean plant. Behind Ma, from left, are students Weidong Wang, Chance Clark and Dominic Provancal. Ma is working to improve soybean plants as part of Purdue’s Next Moves plant sciences initiative. (Purdue University photo/ by Tom Campbell)

WEST LAFAYETTE, Ind. – On the sometimes-foggy journey of following genetic traits to breed resilient plants, a newly identified gene lights the way to soybeans’ natural resistance to a devastating disease.

Purdue University announced an academic-industrial partnership with Corteva Agriscience on Thursday (Nov. 18), resulting in the identification of an individual gene responsible for Phytophthora resistance so plant breeders can easily detect which plants carry the trait.

“Only a tiny DNA sample is needed for a test with a molecular marker, so even seeds can be easily checked for this disease resistance,” said Jianxin Ma, a professor of agronomy in the Purdue College of Agriculture, who led the team. “We don’t have to wait for a plant to grow to see if it carries this trait or waste resources breeding plants without it. This precision breeding accelerates the speed at which a new, robust cultivar can be put in the hands of farmers.”

The gene, designated Rps11, confers broad-spectrum resistance to the pathogen. The team identified and cloned the gene, a critical step to create molecular markers that precisely detect the presence of the gene – the same principle used in testing for COVID-19. Nature Communications published a paper detailing the team’s work.

Phytophthora is a mold responsible for root and stem rot that can ravage soybean fields and costs farmers annually more than $1 billion worldwide. Like fungi and other pathogens, the soil-borne mold has evolved over time, and the resistance of existing soybean lines is waning, said Ma who also is a part of Purdue’s Next Moves in plant sciences and a member of the university’s Center for Plant Biology.

“This pathogen is difficult to manage using fungicides, which also are costly and have potential environmental impact,” he said. “Genetic resistance is the best way to prevent it. In addition to Rps11, the collaboration has resulted in identification of three more genes, which also confer excellent resistance to the pathogen, that we hope to also be able to clone.”

“Corteva Agriscience is pleased to collaborate with Purdue University to develop potential solutions for our farmer customers,” said Jeff Thompson, Global Soybean Lead for Corteva. “This aligns well with our interest in working with land-grant universities in creating innovative solutions to protect our soybean crop from pests and diseases.”

Corteva provided access to a state-of-the art facility and collaboration with top scientists, Ma said. The project team used the company’s high-throughput genotyping and sequencing technologies to pinpoint a novel gene responsible for Phytophthora resistance. The collaboration also provided a training platform and advanced research experience for undergraduate and graduate students at Purdue through direct interaction with Corteva scientists.

The Rps11 gene is found in a complex region of the genome. This region carries a dozen genes that are structurally similar to, but functionally distinct from, Rps11. And the number of such genes in the region varies among plant varieties from five to 23, making it difficult to find Rps11.

“If we had only relied on publicly available soybean reference genomes, we would not have captured Rps11,” Ma said. “The region is present in those genomes, but the counterpart of the gene that gives resistance is not there. Thus, we had to decode the entire region in the Rps11 donor line, and we could not have done it without the equipment and expertise of Corteva.”

Guided by the entire sequence from the region, the team was able to design a set of DNA markers for high-throughput genotyping of more than 17,000 individual plants in a matter of a few months to eventually pinpoint the gene, he said.

The research team hopes to be able to do the same for the other three genes they identified, he said.

“If plants can be bred with multiple genes that confer disease resistance, they would have layers of protection,” Ma said. “We also plan to explore how structural variation of this genomic region gave rise to the resistance, to understand and possibly improve disease resistance in other ways. We want to provide as many tools as we can for sustainable agriculture.”

Phytophthora root and stem rot (PRSR) caused by Phytophthora sojae is a destructive soybean soil-borne disease worldwide. Discovery of genes conferring broad-spectrum resistance to the pathogen is a need to prevent the outbreak of the disease. Here we show that soybean Rps11 is a 27.7-kb nucleotide-binding site-leucine-rich repeat (NBS-LRR or NLR) gene conferring broad-spectrum resistance to the pathogen. Rps11 is located in a genomic region harboring a cluster of large NLR genes of a single origin in soybean, and was derived from rounds of unequal recombination. Such events resulted in promoter fusion and LRR expansion that may contribute to the broad resistance spectrum. The NLR gene cluster exhibits drastic structural diversification among phylogenetically representative varieties, including gene copy number variation ranging from five to 23 copies, and absence of allelic copies of Rps11 in any of the non-Rps11-donor varieties examined, exemplifying innovative evolution of NLR genes and NLR gene clusters.