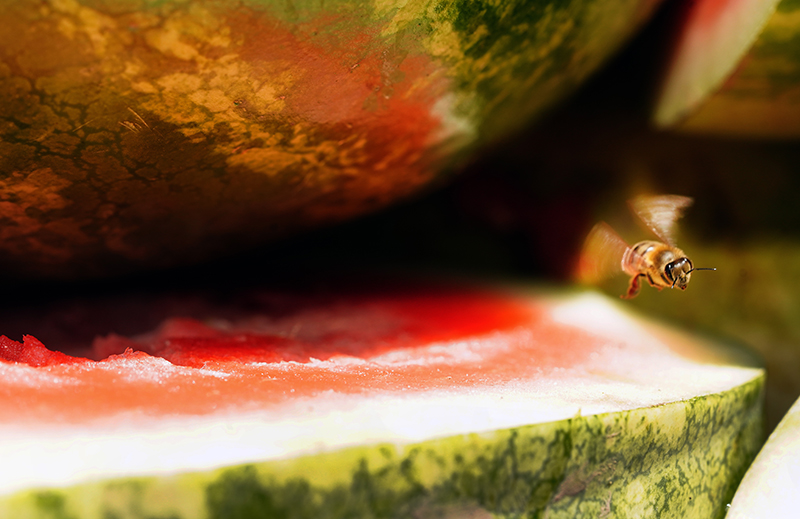 WEST LAFAYETTE, Ind. — Many farmers rent bee hives to pollinate crops, but they could tap into the free labor of wild bees by adopting an as-needed approach to pesticides, a new proof-of-concept study shows.

A multiyear study of commercial-scale fields in the Midwest found this approach led to a 95% reduction in pesticide applications, while maintaining or increasing crop yield for corn and watermelon. The findings are detailed in a paper published in the Proceedings of the National Academy of Sciences.

“An as-needed approach to pesticide treatment can benefit farmers,” said Ian Kaplan, professor of entomology at Purdue University, who led the project. “With reduced pesticide use, we saw within the first year wild bees returned to the fields, and our findings showed an average 26% increase in watermelon yield.”

The team of researchers from Purdue’s College of Agriculture studied fields at five different locations in Indiana and the Midwest over a period of four years to compare conventional pest management with an integrated pest management, or IPM, approach. The IPM approach relied on scouting the fields and applying pesticides only when pest levels reached previously established thresholds for damage that would lead to economic losses.

In the last few decades, pesticides have been used preemptively, beginning with treated seed and followed by applications on a set schedule, said Christian Krupke, professor of entomology and member of the research team.

“Using these potent insecticides, more often, increases the potential for unintended consequences and harm to insects, animals and human health. This study shows that we may not need such powerful weapons to control pests, and, at a minimum, we don’t need to use them as frequently as we do,” Krupke said.

Agricultural sustainability and the benefits of IPM are gaining attention. Walmart recently announced a policy requiring all global fresh produce and floral providers to adopt IPM practices by 2025.

“It is important for people to know that there is another option between conventionally grown produce and organic produce,” said Kaplan who leads Purdue’s Insect Ecology Lab. “IPM can greatly reduce the amount of pesticides used to grow food without taking the tool entirely away from farmers or putting the food supply at risk.”

Midwest growers also are attuned to the issue and want solutions to protect their crops and their pollinators, said Laura Ingwell, assistant professor of entomology. Indiana is one of the major watermelon production states in the U.S. and the pollinator-dependent crop accounts for an average of 7,000 acres of land annually.

“Unfortunately, it is hard to find untreated corn or soybean seed,” she said. “Across the Midwest watermelon fields are like islands in a sea of corn and soybeans. We need to understand how the management of one impacts the other because many Indiana farmers have all of these crops in rotation.”

The team worked with farm staff at the Purdue research fields to grow both corn, which is wind pollinated, and watermelon, which is insect pollinated, to replicate a real agricultural ecosystem in Indiana. Each site had a pair of 15-acre fields, one with untreated seed and using IPM, and the other using treated seed and conventional pest management practices like calendar-based insecticide sprays. The crops were rotated over the course of the study, and the different locations allowed the team to examine the impact of different soil types and environmental conditions, said Jacob Pecenka, a graduate student who performed much of the study.

“We used weekly scouting to monitor pests at the IPM fields, which means we would go into the field, look for pests and take a sample count of the numbers of different pests present,” he said. “It was surprising that the pests rarely reached the established threshold for economic risk to the crops. Only four times during the course of the study did pests reach a threshold that triggered pesticide application. That is a huge reduction from the 97 treatments of the conventionally managed fields.”

Pecenka and his team also monitored the flowers and counted the number of visits by bees in the watermelon fields.

“The IPM fields had a 130% increase in the number of flower visits over the conventional fields,” he said. “The biggest players in pollination were native, wild bees. They are efficient pollinators and serious foragers.”

“We don’t have a great understanding of the biology of many wild bee species, but this study suggests they are important and resilient,” he said. “Within the first year these bees were a significant presence in the fields with low levels of pesticide, which can kill the bees, confuse their navigation and repel them.”

The team also observed an increase in the number of beneficial insects in the IPM fields, Ingwell said.

“Wasps, ladybugs and other natural predators of watermelon pests step in when the pest levels rise,” she said. “It is tempting to pretreat with pesticides as an insurance policy for your crop, but this study shows we can trust the natural system most of the time. Weekly scouting in the watermelon crop is enough to maintain the yield and benefit the insect community in terms of pest suppression and pollination.”

Resources for pollinator protection, and fruit and vegetable growers are available through the Purdue Extension offices.

The team, which also included professor emeritus Rick Foster, next plans to scale up the study using 50-acre commercial fields.

The study of pest management practices in modern industrial agriculture have increasingly relied on insurance-based insecticides such as seed treatments that are poorly correlated with pest density or crop damage. This approach, combined with high invertebrate toxicity for newer products like neonicotinoids, makes it challenging to conserve beneficial insects and the services they provide. We used a four-year experiment using commercial-scale fields replicated across multiple sites in the Midwestern U.S. to evaluate the consequences of adopting integrated pest management (IPM) using pest thresholds compared with standard conventional management (CM). To do so, we employed a systems approach that integrated co-production of a regionally dominant row crop (corn) with a pollinator-dependent specialty crop (watermelon). Pest populations, pollination rates, crop yields, and system profitability were measured. Despite higher pest densities and/or damage in both crops, IPM-managed pests rarely reached economic thresholds, resulting in 95% lower insecticide use (97 vs. 4 treatments in CM and IPM, respectively, across all sites, crops, and years). In IPM corn, the absence of a neonicotinoid seed treatment had no impact on yields, whereas IPM watermelon experienced a 129% increase in flower visitation rate by pollinators, resulting in 26% higher yields. The pollinator-enhancement effect under IPM management was mediated entirely by wild bees; foraging by managed honeybees was unaffected by treatments and, overall, did not correlate with crop yield. This proof-of-concept experiment mimicking on-farm practices illustrates that cropping systems in major agricultural commodities can be redesigned via IPM to exploit ecosystem services without compromising, and in some cases increasing, yields.