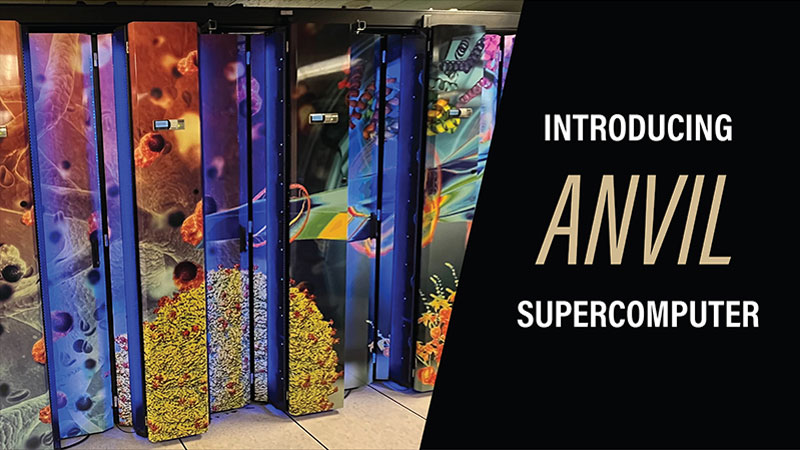 WEST LAFAYETTE, Ind. Purdue University's powerful new Anvil supercomputer will enable new discoveries in fields ranging from hypersonics and deep learning to archeological reconstruction and bone biomechanics. Anvil, which is funded by a $22.5 million grant from the National Science Foundation, is being tested by more than 30 research teams and is expected to enter full production later this year.

In addition to serving researchers at Purdue, Anvil will significantly increase the capacity available to the NSF's Extreme Science and Engineering Discovery Environment (XSEDE), in which Purdue has been a partner for the past 10 years.

We see Anvil as a system forging the future of computing," said Carol Song, principal investigator and project director for Anvil, and a senior research scientist for Purdue Research Computing. "We expect tens of thousands of researchers around the nation to access it and enable their transformative research. We call it science as a service."

At Purdue, early users are working on projects in key areas of research such as:

“We designed Anvil to fit a broad cross-section of research work,” said Preston Smith, executive director of research computing and a co-PI on the project. More researchers than ever before are relying on high-performance computing, and Anvil will be optimized for both the traditional parallel computing that drives research in areas like fluid dynamics and bioinformatics, and also for data science, artificial intelligence and machine learning applications.

Anvil is also available to Purdue industry partners, adding access to Purdue’s world-class cyberinfrastructure to the list of available research facilities. Song says that this access is intended to enable Purdue partners to use Anvil for modeling, simulation and data analysis at large scales and faster turnaround that wouldn't happen without resources like Anvil.

By building Anvil alongside its community cluster supercomputers, including 2020's Bell system, Purdue has leveraged its existing campus computing infrastructure, such as massive storage systems, high-speed networking, and its team of expert research computing staff that has already deployed 15 large supercomputers since 2008. Purdue's community clusters serve thousands of researchers and students each year.

Anvil is built in partnership with Dell and AMD and consists of 1,000 nodes with two 64-core third-generation AMD Epyc processors each, and will eventually deliver over 1 billion CPU core hours to XSEDE each year, with a peak performance of 5.3 petaflops. Anvil's nodes are interconnected with 100 Gbps Mellanox HDR InfiniBand. The supercomputer ecosystem also includes 32 large memory nodes, each with 1 TB of RAM, and 16 nodes each with four NVIDIA A100 Tensor Core GPUs providing 1.5 PF of single-precision performance to support machine learning and artificial intelligence applications.

Research on Anvil will be able to leverage a diverse set of storage technologies, anchored by a 10-plus PB parallel filesystem, boosted with over 3 PB of flash disk. Novel workflows will benefit from block and object storage systems also supported by Anvil.

Anvil also will provide a rich set of features that will broaden access to advanced computing,including interactive computing and visualization capabilities, and a fully integrated web-based Open OnDemand gateway to Anvil's software tools and compute nodes. A composable subsystem will enable cloud and container-based workflows to run alongside the high-performance computing system and will support many modern scientific applications, from gateways, databases, high-throughput data ingestion pipelines, to complex coupled modeling workflows. With seamless pathways to Microsoft Azure cloud, Anvil will help researchers leverage both on-premises and commercial cloud computing for advanced applications such as artificial intelligence modeling and inference.

Anvil also will serve as an experiential learning laboratory for students to gain real-world experience using computing for their science, and for student interns to work with the Anvil team for support and operation.

Purdue University is a top public research institution developing practical solutions to todays toughest challenges. Ranked in each of the last four years as one of the 10 Most Innovative universities in the United States by U.S. News & World Report, Purdue delivers world-changing research and out-of-this-world discovery. Committed to hands-on and online, real-world learning, Purdue offers a transformative education to all. Committed to affordability and accessibility, Purdue has frozen tuition and most fees at 2012-13 levels, enabling more students than ever to graduate debt-free. See how Purdue never stops in the persistent pursuit of the next giant leap https://purdue.edu/