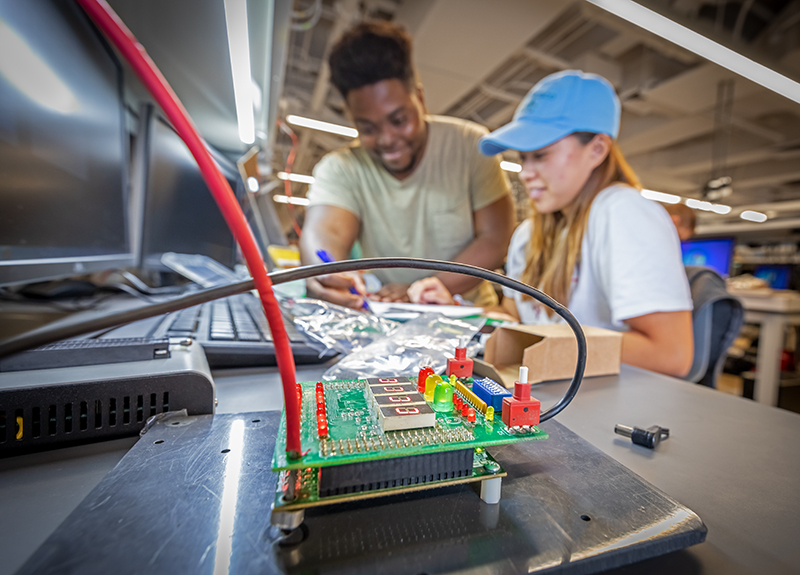 Students get hands-on experience in the newly named Elmore Family School of Electrical and Computer Engineering, the largest academic unit at Purdue. The undergraduate ECE program at Purdue is ranked 10th in the nation by U.S. News and World Report. (Photo taken prior to COVID-19). Purdue University photo/Susan Fleck)

HAMMOND, Ind. — The Purdue University Board of Trustees on Friday (Aug. 6) approved naming the School of Electrical and Computer Engineering (ECE) for the family of alumnus William B. Elmore in recognition of a $25 million gift.

The school will be known as the Elmore Family School of Electrical and Computer Engineering. To maximize the impact of the gift, the school will distribute funds to address both short- and long-term needs and opportunities including the initiation of research and education centers alongside retention and recruitment support for faculty and students.

“The goal is to enable and sustain significant research and education efforts that will advance the frontiers of knowledge, have transformative impact on society and catapult the Elmore Family School of Electrical and Computer Engineering to national and international preeminence,” said Dimitri Peroulis, the Michael and Katherine Birck Head and Reilly Professor of ECE.

“Today, we are happy to launch the first Elmore ECE Emerging Frontiers Center, called Crossroads of Quantum and AI, and the first Cognitive Computing Institute at Purdue. On the education front, we intend to create additional undergraduate opportunities in AI and a new focus area on semiconductors for our graduate students this year. Furthermore, we plan to aggressively expand our field-defining efforts in the areas of virtual labs, AI-enabled personalized learning and online education.”

Elmore (BS EE’75, MS EE’76), who grew up in Centerville, Ohio, now lives near San Francisco, where he established a highly successful career in the venture capital business.

In 1995, Elmore co-founded Foundation Capital, a venture capital firm based in Palo Alto, California, that invests primarily in enterprise, financial and consumer technology companies. Foundation Capital companies include Netflix, Lending Club, SunRun and Chegg. Now an emeritus partner at Foundation Capital, he continues to invest full-time in promising technology startups. Elmore has served as a director of numerous private and public companies and works actively with the Purdue Research Foundation and in support of Purdue.

The university’s College of Engineering honored Elmore’s career and accomplishments with a Distinguished Engineering Alumni/Alumnae Award in 2017. He also received the Outstanding Electrical and Computer Engineer Award in 2003.

“Purdue has been making great strides in advancing its mission – across many, many fronts – under the guidance of Mitch Daniels, and it’s always good to put energy and money behind great momentum,” Elmore said. “I also believe strongly in Purdue’s mission and the vision of the leadership team in the College of Engineering. And, of course, Purdue contributed a lot to my career.”

Because several members of his extended family attended Purdue, Elmore chose to honor them in the naming the school.

“I’m not part of a multigenerational Purdue family, but I am part of a ‘horizontal’ Purdue family – we all went to Purdue contemporaneously and had great experiences – and I wanted to recognize how much we all benefited from going to Purdue,” Elmore said. “What I'd really like is for this gift to inspire other folks of both my generation and younger generations to consider giving back in a major way to Purdue. I’d like this to be an example that others could follow.”

“Bill Elmore has been a transformational leader in the technology venture field throughout the past decades. We are very proud of the pinnacle of excellence in his career and immensely grateful for the visionary generosity from Bill and the Elmore family,” said Mung Chiang, executive vice president for strategic initiatives at Purdue and the John A. Edwardson Dean of the College of Engineering.

“The Elmore Family School of Electrical and Computer Engineering is not only the largest academic unit at Purdue, but also one of the most impactful ECE departments among the country’s top 10. With this naming gift from Bill and the momentum generated, and under the leadership of Dimitri Peroulis, we will propel Purdue ECE’s learning, discovery, and engagement mission to new heights.”

Purdue University is a top public research institution developing practical solutions to today’s toughest challenges. Ranked the No. 5 Most Innovative University in the United States by U.S. News & World Report, Purdue delivers world-changing research and out-of-this-world discovery. Committed to hands-on and online, real-world learning, Purdue offers a transformative education to all. Committed to affordability and accessibility, Purdue has frozen tuition and most fees at 2012-13 levels, enabling more students than ever to graduate debt-free. See how Purdue never stops in the persistent pursuit of the next giant leap at purdue.edu