Saying a Boilermaker farewell from A to Z 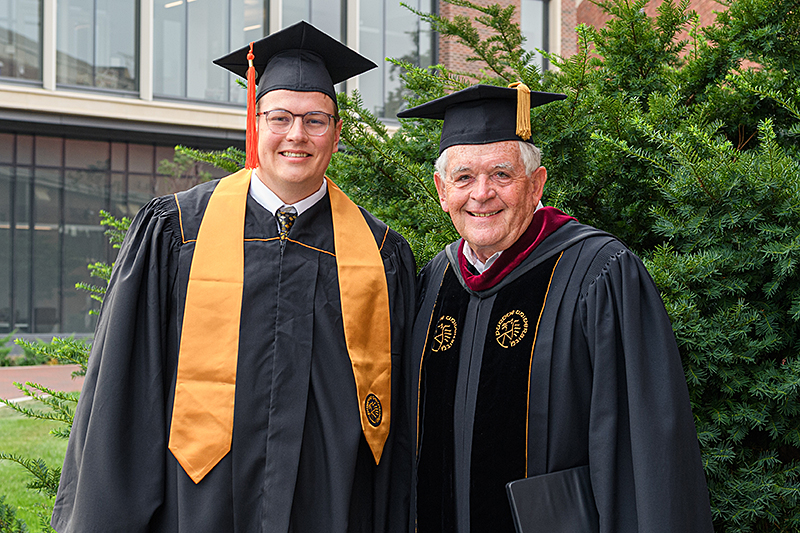 Mike Piggott celebrates his final Purdue commencement with grandson Kevin Hitch, who earned a Bachelor of Science degree in Industrial Engineering on Saturday (Aug. 7). Piggott, whose distinct, booming voice has been a mainstay at Purdue graduations since 2004, is retiring as commencement orator. (Purdue University photo Rebecca McElhoe) 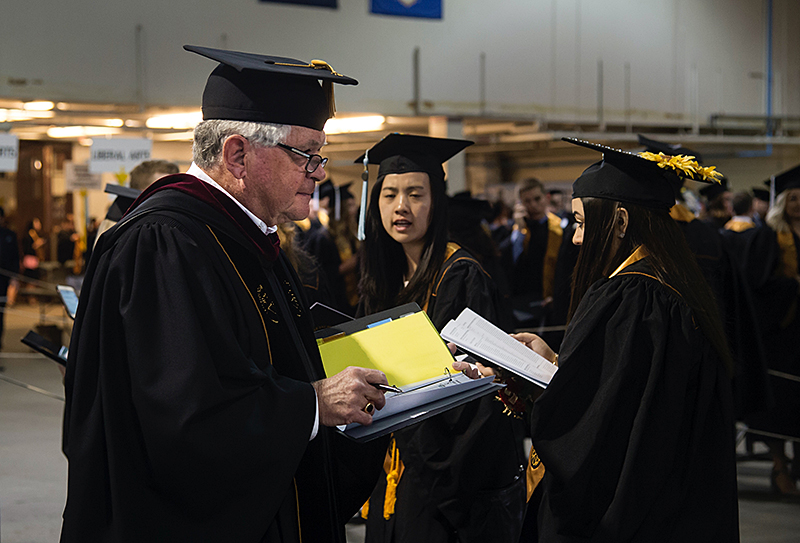 WEST LAFAYETTE, Ind. — Mike Piggott has had some unforgettable, heart-touching and “out of this world” moments during his time as Purdue University’s commencement orator since December 2004.

Piggott will retire after serving for the last time at Purdue’s two Aug. 7 commencement ceremonies.

While there are numerous meetings, phone calls and emails to pull off a commencement ceremony, one meeting took on special significance.

Kirsten Nicole Johnson was preparing to graduate from Purdue in May 2018. And she had a simple request during the commencement meeting: to wear her mother’s graduation robe during the ceremony.

Johnson’s mother, Kathy, had died of breast cancer. As Piggott and Kirsten were conversing, he learned about her “I love you to the moon and back” tattoo, which was her mother’s good-night wish and the significance of the graduation robe.

And as Kirsten crossed the stage during her ceremony, Piggott announced both Kirsten’s and Kathy’s names.

“They walked the stage together,” says Piggott of that moment.

To top it off, Piggott’s granddaughter, Kristin Nicole Hitch, also graduated that weekend – with him saying her name, too.

The path to becoming the commencement orator started as a simple question. Piggott was asked by Joe Bennett, then vice president for university relations, if he would be willing to serve as orator.

Piggott submitted the paperwork and met with the committee, as they were trying to find a new orator for the ceremonies. 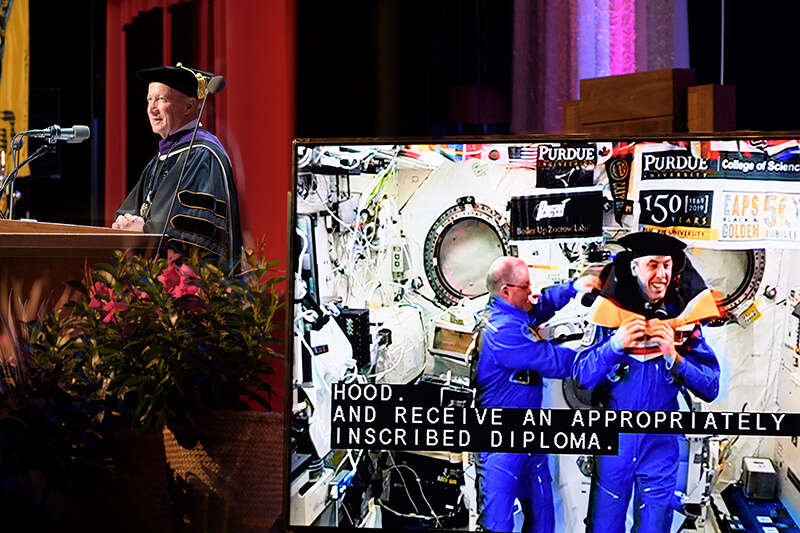 Before starting at Purdue as director of community relations in July 2001, Piggott spent nearly two decades as an anchor, general manager and news director at WLFI, the CBS affiliate in Lafayette/West Lafayette. He also served as the public address announcer at Mackey Arena and volunteered as an emcee at numerous community charity and nonprofit events.

“Mike just fell into the job,” says Chris Pass, senior assistant registrar and co-vice chair of the commencement committee. “With all of his public speaking, it just brought his name to the top.”

“He has such a genuine love for this campus and community. When it comes to commencement, Mike is a consummate professional,” Perrault says. “There's a reason some people simply call him ‘The Voice.’ He has that rare vocal quality that is both powerful and pleasant.”

Pass announced that Michael Reckowsky, director of industry engagement for Purdue Polytechnic Institute, will be the incoming orator. Reckowsky will shadow Piggott through the August commencement and work with Perrault on future commencements.

While being involved in 132 in-person and nine virtual ceremonies, Piggott and others on the team point out a large moment of irony. Piggott, who earned his Bachelor of Arts degree from Purdue in 1972, missed his own commencement ceremony by attending basic training for the National Guard at Fort Leonard Wood in Missouri.

A routine that’s anything but routine

A few weeks before each graduation ceremony, the commencement team sends Piggott and Perrault the complete listing of candidates’ names so they can start their review process. Pass estimates that during Piggott’s time as orator, he has announced the names of more than 100,000 Boilermaker graduates with his unmistakable booming voice.

“If there is any name that looks like it could be a challenge, I’ll send an email to the student and ask them to call me,” says Piggott. “ I’ll write it out phonetically and have it ready. You try to be careful. Most students are very appreciative.”

If he doesn’t receive a return call, he will take his list and go through the lines at the Armory or other commencement staging areas to check in with students on any last-minute pronunciations.

The great lengths and details Piggott goes through to get the pronunciation right go back to his days in television news. He continually received calls from viewers who wanted to get copies of the newscast, which featured family and friends who made the local news.

“It struck me then and it has stayed with me: You at least want to get their name right,” Piggott says.

Pass explains that while Purdue’s commencement ceremonies are high in tradition, it’s that extra personal touch of not only hearing a graduate’s name, but also knowing that the orators are contacting people to understand how to say the name correctly is appreciated. 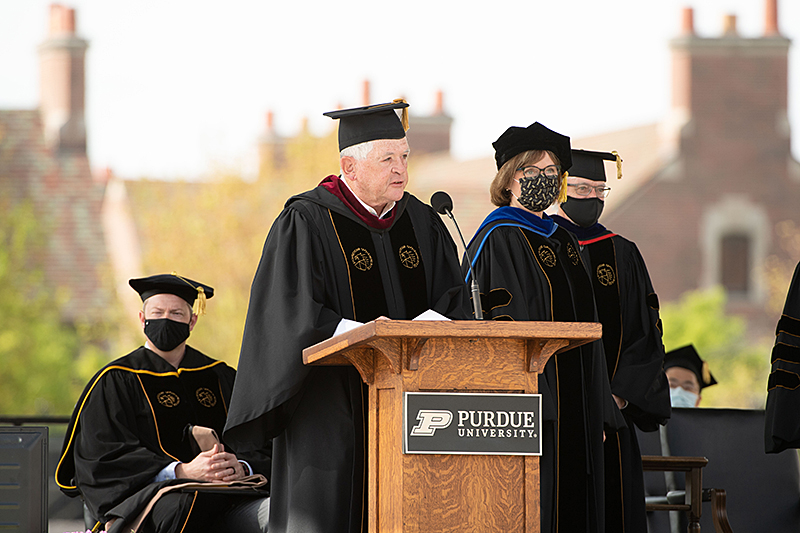 Mike Piggott introducing the honorary doctorate recipients during the May 2021 commencement at Ross-Ade Stadium in May. (Purdue University photo/John Underwood) Download image

Perrault, who has served as an orator with Piggott for five years, says that very few people understand the amount of time – sometimes a full week – that Piggott puts in to make sure that every student’s name is pronounced correctly.

“Mike is so proud of Purdue graduates and their achievements, he believes this is an important service we owe them,” Perrault says. “He has this black binder of names he carries around as he tracks students down, determined to make their day special.”

Feustel (BS ’89, MS ’91) was not there – he was 250 miles away aboard the International Space Station (ISS). He received the honorary doctorate via a live link to the ISS during the ceremony. Fellow Boilermaker and NASA astronaut Scott Tingle (MS ’88) hooded Feustel during the ceremony.

“With Drew, Kristin and Kirsten, I’d say that was my favorite commencement weekend,” says Piggott.

Another moment that stands out is all the work done to provide commencement ceremonies for the Class of 2020 in May, August and December of last year.

When Purdue officials announced that the 2020 commencements would be virtual because of the pandemic, Piggott showed persistence and flexibility with the rest of the commencement team and rose to the occasion. He followed through by emailing candidates, getting calls from the students with the correct pronunciations of their names.

And then he spent several days in a sound booth in the basement of Stewart Center recording every candidates’ name for each ceremony.

“Purdue has a great ceremony; recording the names was what we could do,” he says.

Pass even points out that afterwards, if they received a call from a family on a wrong pronunciation, both Piggott and Perrault went back into the sound booth to record the correct name, and Hall of Music staff would replace the name on the virtual ceremony.

Piggott’s retirement coincides with his grandson, Kevin Hitch, earning his Purdue degree on Saturday. Kevin will receive his Bachelor of Science degree in Industrial Engineering during the first ceremony that day.

“I’m looking forward to announcing Kevin at the August ceremony. I really wanted to be a part of his graduation,” Piggott says.

Kevin says it is going to be a special moment hearing his grandfather call his name in front of the Elliott crowd.

“He is one of the main reasons that I chose to come to Purdue, and the fact that we can share this experience is something I will always remember and cherish,” Kevin says. “My sister graduated in 2018 and my grandpa got to read her name, so it’s something that we have all been looking forward to.”

Kevin is also relieved that many of the COVID-19 restrictions have been lifted – so there can be an in-person graduation at Elliott with names being read.

“It will be hard to replace him,” Pass says. “He’s done such a great job for us and Purdue.”


Note to journalists: Images of Mike Piggott are available via a Google Drive. Journalists interested in covering the commencement ceremonies can contact Amy Patterson Neubert at apatterson@purdue.edu to arrange for credentials. Journalists visiting campus should follow visitor health guidelines.