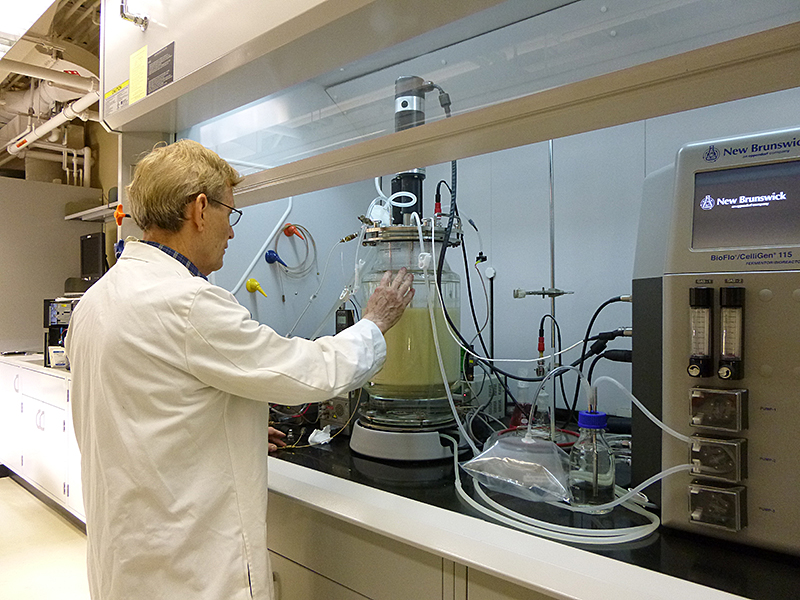 "Researchers at Purdue University campuses disclose their innovative work to OTC throughout the year. Sometimes it needs support to move from concept or even a first prototype to a more mature, proven innovation," Beier said. "Taking that step strengthens OTC's ability to apply for IP protection, market and even license innovations so they can reach the public to improve people's lives. The Trask Innovation Fund supports that step."

Abhijit Karve, director of business development at OTC, said the Trask funding is awarded on a competitive basis.

"The four projects that received funding were vetted by our business development and IP team before they were presented to the Trask Advisory Board," Karve said. "The quality of work by Purdue researchers across all academic disciplines and campuses is impressive and will continue to make its mark on people's lives as they reach the marketplace."

The five Purdue researchers leading the four projects are:

Lin and Goergen received $50,000 for "Machine Learning-driven Contouring System for High-frequency, Four-dimensional Cardiac Ultrasound and Photoacoustic Imaging." Lin is a professor of mathematics and mechanical engineering. Goergen is the Leslie A. Geddes Associate Professor of Biomedical Engineering.

Lin said the contouring system could be used by biomedical researchers using cardiac ultrasound and photoacoustic imaging systems. It improves upon traditional methods to identify boundaries within image data.

"Compared to manual techniques that can take up to an hour to process, large data sets from hundreds of timepoints and thousands of locations can be processed within seconds," Lin said.

Goergen said developing the innovative system requires building a larger image repository of a variety of diseases and continuing to improve the machine learning algorithms.

"Trask funding is crucial to support the students and postdoctoral fellows who will be working to move this project forward," Goergen said. "The funds will also benefit our commercialization efforts as we aim to partner with interested companies."

Chaterji received $25,000 for "OptimusAI: Cloud-hosted Database for Internet of Things and Computer Vision." Chaterji is an assistant professor in the Department of Agricultural and Biological Engineering and leads the Innovatory for Cells and Neural Machines (ICAN), which works in applied machine learning for IoT and cloud analytics.

Chaterji is developing two varieties of the technology, one licensed directly to other companies in the IoT/e-commerce sector. The second is a turnkey solution for managing clients' cloud resources, whether on their premises or in the cloud.

"We have incorporated a company, KeyByte LLC, to further bring the technology to the marketplace. I am the CEO, and Professor Saurabh Bagchi in the School of Electrical and Computer Engineering is the chief technology officer," Chaterji said. "We also are working with OTC and Wisconsin-based incubator SuperSonic to further our technology with dashboards, to provide customization to specific early adopter clients and increase our coverage to new databases and cloud providers."

Chaterji said the Trask funding will help develop the technology in several ways.

"We will hire a graduate student to conduct front-end development and extend the technology to support two popular database technologies: Redis and MongoDB," Chaterji said. "We also will leverage the cloud credits to make our technology work on Google's cloud ecosystem and benchmark with Amazon's AWS."

Kramer received $25,000 for "Production of Hydrogen Using a Biological Process Employing Yeast." He is a professor of physics in the Department of Chemistry and Physics.

Kramer said more than 30% of all food, amounting to $48 billion, is wasted in the United States each year; that waste could be used in a process to create hydrogen, a sustainable energy source that does not cause environmental issues.

"Hydrogen is an important basic material for industrial processes and can be used to generate power locally or as a transportation fuel," he said. "When hydrogen is combusted, the only byproduct is water vapor."

Kramer's innovative process produces hydrogen that can be used for energy or as a process chemical.

"The developed process has a high production rate and can be implemented quickly," he said. "The process is robust, reliable and economically viable for local energy production."

The Trask funding will enable Kramer to develop a continuous flow option for the hydrogen-producing process.

"The award will provide needed equipment and supplies," Kramer said. "At the completion of this effort, the next step will be to do additional scale-up development at a test site in anticipation of commercialization."

Groll said certain refrigeration, air conditioning and heat-pumping systems use multiple, parallel compressors on a rack to achieve variable cooling or heating capacities in vapor compression systems. Many supermarket refrigeration systems, as an example, use multiple, parallel scroll or reciprocating compressors for their medium- and low-temperature vapor compression loops.

Sometimes compressors fail due to lack of oil and lubrication.

"Our OCR sensors allow end users to measure the online oil return to the compressors' suction port. By including appropriate system logic, the available oil to properly lubricate the compressions during any operation mode can be monitored," Groll said.

Groll said the OCR measuring and monitoring technology can alert users if any particular compressor has a lack of oil. Users can then change parameters to provide proper oil return to the compressor, increasing its reliability and longevity.

Groll said the OCR technology will be implemented in a conventional suction line accumulator, which is typically installed into systems of interest.

"This way, no additional system component has to be purchased in order to install the OCR measurement sensor," Groll said. "It already will be included as a necessary system component."

The Trask Fund award will allow Groll and his team to purchase all the necessary components to install the OCR measurement technique into conventional technology.

"Once the accumulator is designed and constructed, its operation and measurement accuracy will be first tested in a specifically designated and available OCR text facility at the Ray W. Herrick Laboratories on campus," Groll said. "Afterward, the operation of the OCR accumulator will be verified in an actual multi-compressor cold-climate heat pump system, also available at the Herrick Labs."