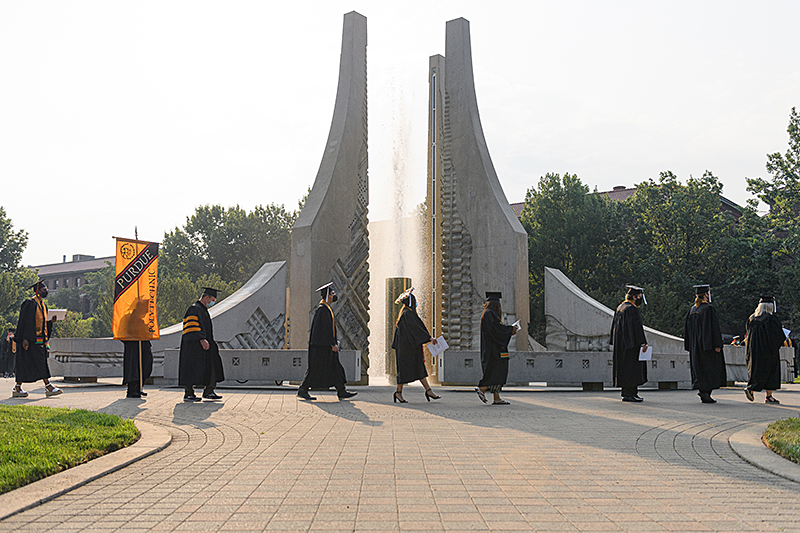 WEST LAFAYETTE, Ind. — Elliott Hall of Music on Saturday (Aug. 7) once again came to life as students crossed the stage for the August 2021 commencement ceremonies. 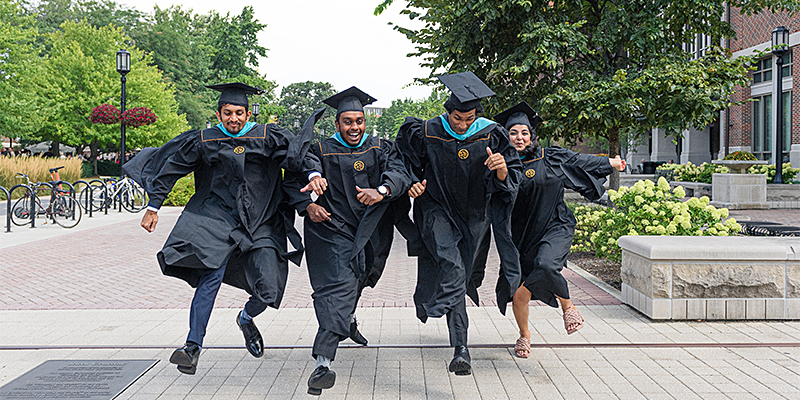 A group of happy graduates cross the tracks on Purdue’s campus as they begin new chapters in their lives. (Purdue University photo/Rebecca McElhoe) Download image

Purdue alumna Jocelyn Wong was the keynote speaker at the morning ceremony. Richard Kuhn, the Trent and Judith Anderson Distinguished Professor in Science and the Krenicki Family Director of the Purdue Institute of Inflammation, Immunology and Infectious Disease, keynoted the afternoon ceremony. Read Wong’s address and Kuhn’s speech to grads.

Wong serves as the chief customer officer for Gopuff, a late-stage startup that delivers consumer goods in less than 30 minutes in more than 650 U.S. cities. Before Gopuff, she served as the chief marketing officer for Lowe’s. During her 24-year career, she has held numerous leadership roles at Safeway, Family Dollar and Procter & Gamble, where she began her career as a process engineer before transitioning into brand management.

Wong earned her bachelor’s degree in food process engineering from Purdue. One of the most impactful moments in her life was when she won the Student Soybean Innovation Competition for creating soy crayons during her sophomore year at Purdue. That single event is what led her down a path to pursue a career she not only loved but also excelled – marrying the technical aspect of engineering with the creativity of marketing to solve real-world problems.

Kuhn received his Bachelor of Science and Ph.D. from SUNY at Stony Brook. After receiving his Ph.D. in 1986, he joined the laboratory of James Strauss at California Institute of Technology, where he studied alphaviruses. Kuhn was recruited to Purdue in the Markey Center for Structural Biology in 1991. His research has focused on the replication and assembly of alphaviruses, picornaviruses and flaviviruses. Together with his structural biology colleagues, Kuhn has been involved in many fundamental studies examining the structure and assembly of viruses, including dengue and Zika viruses. He served as department head of biological sciences from 2005-16 and director of the Bindley Biosciences Center from 2007-15.

Tanmay Das of Dwarka, New Delhi, India, gave the student response during the morning ceremony. Das received his Bachelor of Science in Mechanical Engineering. He has held numerous internship positions at Rheem Air Conditioning in Fort Smith, Arkansas; General Electric Aviation in Bangalore, India; Oerlikon Graziano Drive Systems in Uttar Pradesh, India; and Bahrain Fiber Glass International in Mina Salman, Bahrain. He has served as a peer mentor for the Bechtel Innovation Design Center and as both the transmission and suspension lead for the Purdue Baja Racing Team. Das was the recipient of the John M. Starkey Prize in Mechanical Engineering, the Bottomley Research Scholarship and, twice, the Gordon Hall Mechanical Engineering Scholarship. He will continue his mechanical engineering studies at the University of Michigan as a master’s student.