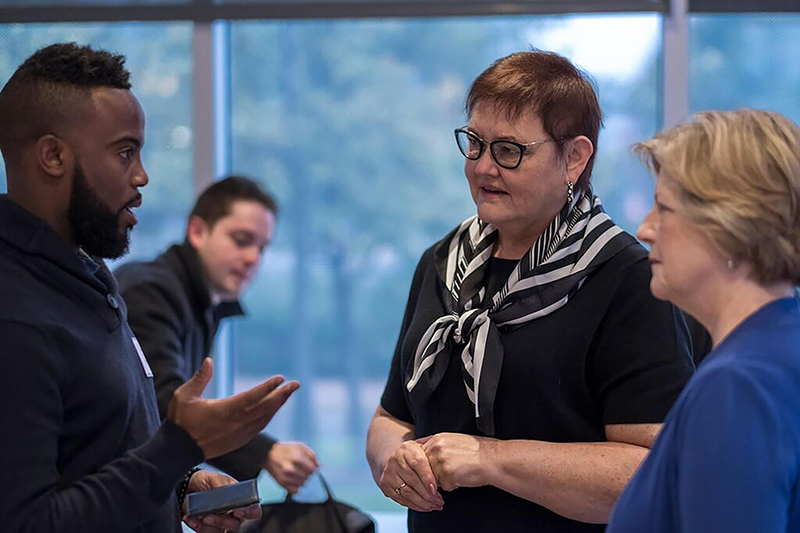 Purdue leads in the new NSF I-Corps Great Lakes Hub. Faculty and graduate researchers at Purdue gain training through the I-Corps program to support the creation of startups and advance research and technologies to market. (Purdue Research Foundation photo/Oren Darling)

WEST LAFAYETTE, Ind. — In an effort to nurture a regional innovation ecosystem and advance research from the lab to market, the National Science Foundation has established a Great Lakes Innovation Corps Hub. Purdue University plays a leadership role in the new $15 million hub.

The 11-university hub is led by the University of Michigan (U-M), and it's one of five across the country that NSF announced Wednesday (Aug. 25) as it continues to evolve the I-Corps program. Launched in 2011, I-Corps trains scientists and engineers to carry their promising ideas and technologies beyond the university and into the marketplace to benefit society.

“A critical part of research at Purdue is the translation of discoveries and advances that have the potential for significant impact on society,” said Theresa Mayer, executive vice president for research and partnerships at Purdue University and Purdue’s principal investigator on the I-Corps Hub. “Purdue is thrilled to continue to be part of the NSF I-Corps program and to join with universities throughout the Great Lakes region in support of our collective mission to accelerate the time to commercialization.”

In coastal cities, entrepreneurship and innovation often thrive organically because significant numbers of investors and innovators operate in close proximity to collaborative opportunities and pathways for developing research. The Great Lakes Hub aims to connect people at a large scale to increase the “effective density” of the Midwest’s innovation ecosystem.

“The Great Lakes region is home to many of the world's leading research institutions, and many of our nation's critical industries. Our goal with this I-Corps Hub is to leverage this intellectual depth to create a lasting economic impact on the region," said Alec D. Gallimore, the Robert J. Vlasic Dean of Engineering, the Richard F. and Eleanor A. Towner Professor, an Arthur F. Thurnau Professor, and a professor of aerospace engineering at the University of Michigan.

“We'll do this by creating new businesses, by keeping our existing companies globally competitive and on the leading edge of technology and by developing talent that not only has technical and cultural expertise, but also an entrepreneurial mindset,” Gallimore said.

Over the past four years, the Midwest I-Corps Node, a collaboration between U-M, Purdue and UIUC, has introduced the entrepreneurial mindset to over 3,000 scientists and engineers across the Midwest, and it has helped teams assess the commercial potential of nearly 1,000 technologies.

The new Hub has set a goal of training 2,350 teams in the next five years, and sending an additional 220 teams to the National NSF I-Corps program.

Purdue’s participation in the NSF I-Corps program dates back to the award of an I-Corps Site in 2015. Led by the Krannert School of Management, the I-Corps Site has been a collaborative initiative with co-PIs from the College of Engineering, the Purdue Polytechnic Institute, the Office of Technology Commercialization, the Purdue Foundry, and the Burton Morgan Center.

Purdue’s I-Corp programs, offered through the Krannert School of Management, the Purdue Foundry, and the Burton Morgan Center, prepare teams of researchers to participate in the National I-Corps program, an intense seven-week program designed to enable teams of scientists, engineers, and researchers to understand the potential value of their technology and inventions to society. Purdue’s I-Corps Site has been an important contributor to Purdue’s commercialization enterprise. More than 200 Purdue teams have engaged in I-Corps, many of which have gone on to form companies and raised more than $100 million in follow-on funding.

“During the last six years, Purdue’s engagement with both I-Corps and NSF’s National Innovation Network has been integral to the reimagining of the university’s innovation process from invention to commercialization,” said Matthew Lynall, Purdue clinical professor of management, who serves as the PI for Purdue’s NSF I-Corps Site, and co-PI for the Great Lakes I-Corps Hub. “I-Corps has helped our researchers understand and advance the commercial potential of their research and has provided critical perspective as they determine the next steps in their path to commercialization.”

In addition to Lynall, who was recently appointed as the Avrum and Joyce Gray Director of the Burton Morgan Center for Entrepreneurship at Purdue, other university leaders and researchers play critical roles in the program. Professor Nathalie Duval-Couetil, professor of human resource development and director of Purdue’s Certificate in Entrepreneurship and Innovation, is the hub research lead. Yung-Hsiang Lu, electrical and computer engineering professor and director the John Martinson Entrepreneurial Center, is the faculty lead and will work to connect faculty members to the I-Corps community.