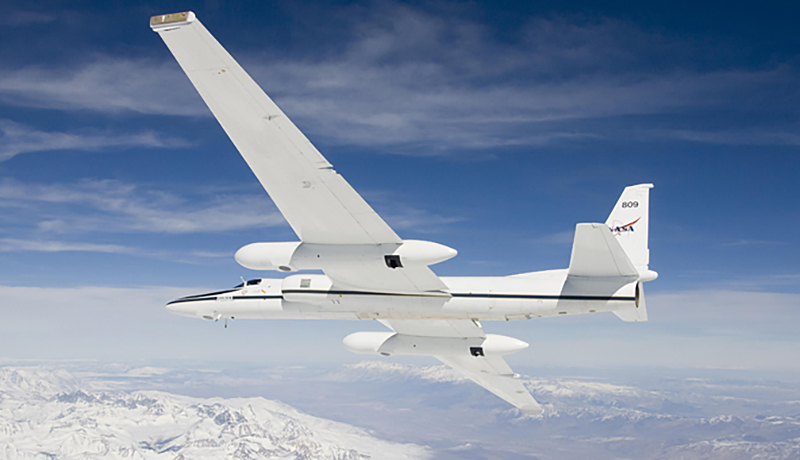 NASA’s two Airborne Science ER-2 aircraft NASA fly higher than any other research platform, reaching heights of nearly 70,000 feet, twice that of most commercial flights, to study atmospheric and planetary science, among other applications. Dan Cziczo, head of the Department of Earth, Atmospheric, and Planetary Sciences at Purdue University, leads a project to use tools in the plane’s nose cone to study the stratosphere and how climate change might be affecting weather, including monsoons. (NASA / Carla Thomas)

WEST LAFAYETTE, Indiana — During the summer, North America’s monsoon season creates massive storms across the Midwest. These storms can cause a phenomenon where the lowest atmospheric layers, the troposphere and stratosphere, mix.

Though rare and difficult to study — the stratosphere hovers from 6.2 to 31 miles above Earth’s surface — this mixing needs study because, as climate change happens, the world’s monsoons may change.

To study these layers and the barrier between them, NASA has created the DCOTSS (Dynamics and Chemistry of the Summer Stratosphere) project. DCOTSS studies the convective impacts on the summer stratosphere over North America by using a NASA ER-2 aircraft outfitted with state-of-the-art equipment. Initial test flights have recently completed at the Armstrong Flight Research Center in Palmdale, California, in the western Mojave Desert.

“The reason we use the ER-2 is that it really is the highest available platform that NASA has. It can get you the furthest into the stratosphere,” says Daniel Cziczo, head of the Department of Earth, Atmospheric, and Planetary Sciences in Purdue University’s College of Science. “It can go up to 70,000 feet (roughly 13 miles). We step up and down in altitude so that we are basically cutting through layers of the troposphere and stratosphere. Most other research aircraft struggle to get just to that transition but the ER-2 can actually get into it. With the ER-2, we can range from 60,000 feet to almost 70,000 feet.”

The ER-2 can hold multiple instruments during each flight. The nose of the aircraft holds an instrument called PALMS-NG (Particle Analysis by Laser Mass Spectrometry - Next Generation). Cziczo is the lead for PALMS-NG, while Justin Jacquot and Xiaoli Shen, Purdue EAPS postdoctoral research associates, work on developing the instrument, taking it into the field, and analyzing the data it produces.

“If we see climate changing on the surface, we can measure it,” Cziczo says. “But we don’t really get into the stratosphere that often, so the more measurements that we have, the better we understand it now and into the future, the better we’ll be able to understand changes that are occurring and how that might impact us in the future.”

The PALMS-NG is based on an earlier instrument used by the National Oceanic and Atmospheric Administration (NOAA), which had been flying since the 1990s but was updated for increased performance. PALMS-NG is able to use mass spectrometry while in flight to evaluate atmospheric particles. The instrument, situated in the nose of the aircraft, measures single-particle aerosol composition using UV laser ablation to generate ions analyzed with time-of-flight mass spectrometry.

“It is capable of analyzing atmospheric particles one at a time,” Cziczo says. ‘It can determine their size and chemical composition, essentially a ‘fingerprint’ of what they are. This is incredibly important to understand things like air quality, climate and precipitation - all parts of what we’re doing in DCOTSS.”

On June 9, the ER-2 had its first successful flight using the new PALMS-NG instrument. The PALMS-NG project is made possible in part by its partners at NASA, NOAA, Original Code Consulting (OCC), and Air Innova.

According to NASA, the DCOTSS project brings together 12 instruments for in situ measurements of important trace gases, aerosols, reactive species and meteorological parameters. This data is complemented by the NEXRAD radar network, satellite data products and operational modeling to provide a more complete mapping of Earth’s atmosphere. The DCOTSS consists of a five-week test series as well as two seven-week science deployments out of Salina, Kansas, to cover the period of early to late summer.

“DCOTSS is hugely important for the future of the atmosphere,” Cziczo says. “Because, as our climate changes, we are very likely changing monsoons here and in Asia, and that’s going to result in changes in the stratosphere and troposphere. That’s one of the main things we are trying to understand with this: the fundamentals of how this exchange occurs. If we don’t have a baseline now, we’re not going to understand what change is happening. Because the monsoon is so important for water, vegetation, land use, agriculture, etc., if we don’t understand it now and we can’t project it into the future, we’re in big trouble.”