Malaria treatment shown to be 100% effective in Phase 2 trial 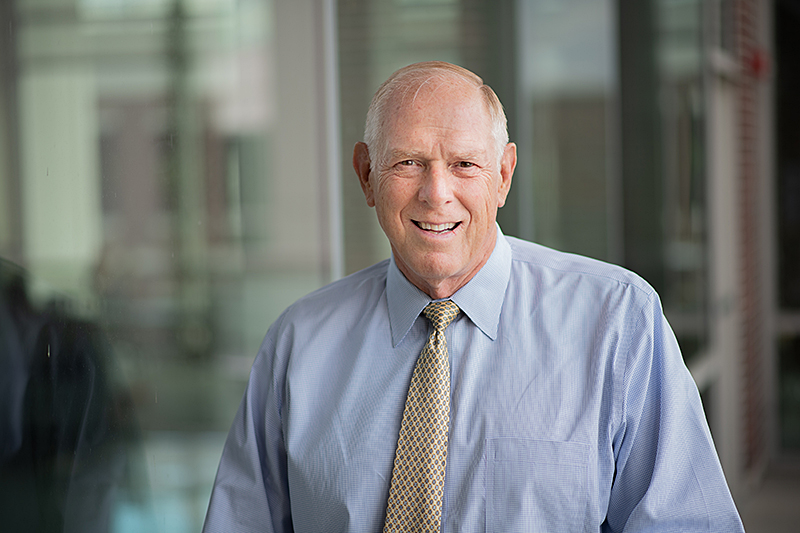 A repurposed cancer drug has been shown to be 100% effective in treating malaria in a Phase 2 clinical trial. Purdue University professor Philip Low led the international team that made the discovery. (Purdue University photo/John Underwood)

WEST LAFAYETTE, Ind. — A cancer drug repurposed to treat malaria has been shown to be nearly 100% effective in helping defeat the disease in just three days, according to the results of a Phase 2 clinical trial.

The results of the trial were published Thursday (Aug. 26) in the Journal of Experimental Medicine.

The trial shows that the addition of the drug Imatinib to the customary malaria therapy enables clearance of all malaria parasites from 90% of patients within 48 hours and from 100% of patients within three days, says Philip Low, Purdue University’s Presidential Scholar for Drug Discovery and the Ralph C. Corley Distinguished Professor of Chemistry, who co-directed the international research team. The patients receiving Imatinib also were relieved of their fevers in less than half of the time experienced by similar patients treated with the standard therapy.

“In our trial, 33% of the patients treated with the standard therapy (but without the Imatinib supplement) still suffered from significant parasitemia after three days,” said Low (rhymes with “now”). “Delayed clearance rates are a precursor to and an indicator of potential drug resistance, which has been a problem with malaria for decades. So, this could be significant.”

Imatinib was originally produced by Novartis for the treatment of chronic myelogenous leukemia and other cancers. It works by blocking specific enzymes involved in the growth of cancers.

Malaria infects human red blood cells, where it reproduces and eventually activates a red blood cell enzyme that, in turn, triggers rupture of the cell and release of a form of the parasite called a merozoite into the bloodstream. Low and his colleagues theorized that by blocking the critical red blood cell enzyme, they could stop the infection. The data from the drug trial confirms that.

Low said for the past 50 years, malaria treatments have used drugs that target the parasite itself, but the microorganism eventually developed resistance to the drugs.

“Because we’re targeting an enzyme that belongs to the red blood cell, the parasite can’t mutate to develop resistance — it simply can’t mutate proteins in our blood cells,” Low said. “This is a novel approach that will hopefully become a therapy that can’t be evaded by the parasite in the future. This would constitute an important contribution to human health.”

Malaria is caused by a single-cell parasite, Plasmodium, which is carried by mosquitoes. The World Health Organization estimates that the disease caused 409,000 deaths in 2019 (the most recent year for which data is available). The WHO also notes that 67% of those deaths were in children under 5 years old.

The deadliest form of the parasite is P. falciparum, and although most malaria deaths occur in sub-Saharan Africa, a variant of P. falciparum that is developing drug resistance has become established in a corner of Southeast Asia, particularly in Cambodia, Myanmar, Thailand, Laos and Vietnam. In some regions of the area, up to 80% of malaria parasites are at least partially drug resistant.

In 2019, professor Olivo Miotto from the Wellcome Sanger Institute of the University of Oxford, told the BBC the rise of the drug-resistant variant in Southeast Asia raises the “terrifying prospect” of the drug-resistant variety traveling to Africa. A similar event occurred in the 1980s with malaria resistant to the then-standard treatment of chloroquine, which resulted in millions of deaths.

Low and his colleagues tested Imatinib in a hot zone of drug-resistant malaria on the border of Vietnam and Laos, in the Quang Tri Province of Vietnam.

“It’s such a remote region of the country that most of the clinics are one- or two-room cinder block buildings with just six or seven cots where people can come in and get treated,” Low said. “Not only was the drug 100% effective after three days, but the patients saw their fever disappear on the first day, and they felt much better sooner.”

Although malaria is not a significant disease in North America, Low is planning to apply for approval by the U.S. Food and Drug Administration.

“The FDA is so widely respected around the world that if they approve it, almost all other nations, especially developing countries that suffer from malaria, will rapidly adopt it,” he said. “The FDA requirements for Phase 3 approval are very rigorous. You have to demonstrate the drug combination’s efficacy and safety in a large patient population and then show that you can manufacture and store it safely and reproducibly. You also have to start from scratch and end up with a product that is more than 99% pure.”

An international priority patent application has been filed in Vietnam by Purdue Research Foundation, VinUniversity in Vietnam, University of Sassari in Italy and Italian company NUREX SRL.

Low said he has been in discussions with drug manufacturers in India and Vietnam to produce the drug and estimates that can be done for roughly $1 per pill.

“We’ll turn over the technology to any company committed to distributing it to developing malaria-infested areas,” he said. “I’m not interested in making a penny off of this. I just think it’s important for humanity to have it.”

To egress from its erythrocyte host, the malaria parasite, Plasmodium falciparum, must destabilize the erythrocyte membrane by activating an erythrocyte tyrosine kinase. Because imatinib inhibits erythrocyte tyrosine kinases and since imatinib has a good safety profile, we elected to determine whether co-administration of imatinib with standard-of-care (SOC) might be both well-tolerated and therapeutically efficacious in malaria patients. Patients with uncomplicated P. falciparum malaria from a region in Vietnam where 1/3 of patients experience delayed parasite clearance (DPC; continued parasitemia following 3 days of therapy) were treated for 3 days with either the region’s SOC (40mg dihydroartemisinin+320mg piperaquine/day) or imatinib (400mg/day) + SOC. Imatinib+SOC-treated participants exhibited no increase in number or severity of adverse events, a significantly accelerated decline in parasite density and pyrexia, and no DPC. Surprisingly, these improvements were most pronounced in patients with the highest parasite density, where serious complications and death are most frequent. Imatinib therefore appears to improve SOC therapy with no obvious drug-related toxicities.


Note to journalists: A photo of Philip Low and images of the Purdue University logo can be found on a Google Drive. Journalists visiting campus should follow visitor health guidelines.