The COVID-19 virus may not insert genetic material into human DNA, research shows 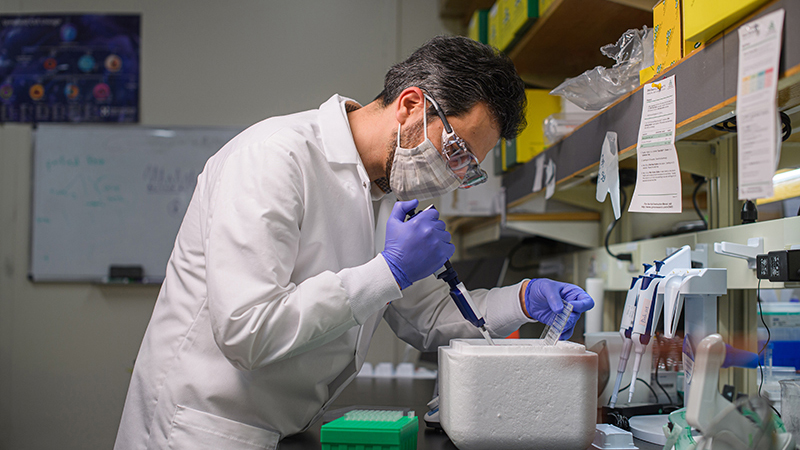 The virus that caused COVID-19 likely does not integrate its genetic material into the human genome, research says. Although throughout human history there have been viruses capable of integrating their genetic material into human genes, this new study found that the COVID-19 virus, which is known to scientists as SARS-CoV-2, lacks the molecular machinery to integrate its RNA into human DNA. "Our work does not support the claim that SARS-CoV-2 fuses or integrates into human genomes," says Purdue scientist and co-lead author Majid Kazemian, pictured here. (Purdue University photo/Rebecca McElhoe)

WEST LAFAYETTE, Ind. — The virus that causes COVID-19, which scientists refer to as SARS-CoV-2, likely does not integrate its genetic material into the genes of humans, according to a study published in the Journal of Virology.

A separate study recently reported the virus's genetic material was found to have integrated into human DNA in cells in petri dishes. But the scientists conducting the newer research now say that result was most likely caused by genetic artifacts in the testing.

Majid Kazemian, a Purdue University assistant professor of biochemistry and computer science and one of the three co-lead authors on the research study, said that this finding has two important implications.

"Relatively little is known about why some individuals persistently test positive for the virus even long after clearing the infection. This is important because it’s not clear whether such individuals have been re-infected or whether they continue to be infectious to others. So-called 'human genome invasion' by SARS-CoV-2 has been suggested as an explanation for this observation, but our data do not support this case.

"If the virus was able to integrate its genetic material into the human genome, that could have meant that any other mRNA could do the same. But because we have shown that this is not supported by current data, this should allay any concerns about the safety of mRNA vaccines, he said."

It is possible for the genetic material of some viruses to be incorporated into the DNA of humans and other animals, resulting in what scientists call "chimeric events." Human DNA contains approximately 100,000 pieces of DNA from viruses that our species have accumulated over millions of years of evolution. In total, this lost-and-found DNA from viruses makes up a bit less than 10% of the genetic material in our cells.

Recent scientific journal articles have claimed that the SARS-CoV-2 virus can also cause these chimeric events. Even before this new research team conducted experiments showing this was not the case, the researchers suspected it was unlikely, said Dr. Ben Afzali, an Earl Stadtman Investigator of the National Institutes of Health’s National Institute of Diabetes and Digestive and Kidney Diseases and a co-lead author on the study.

"While an earlier study suggested that, in cells infected with SARS-CoV-2, genetic material from the virus copied and pasted itself into human DNA, our group thought this seemed unlikely,” Afzali said. “SARS-CoV-2, like HIV, has its genetic material in the form of RNA but, unlike HIV, does not have the machinery to convert the RNA into DNA. SARS-CoV-2 is unlikely to paste itself into the genome and coronaviruses, in general, does not go near human DNA. As our study shows, we find it highly improbable that SARS-CoV-2 could integrate into the human genome.”

Christiane Wobus, associate professor of microbiology and immunology at the University of Michigan Medical School, also a co-lead author on the study, said that although the collective understanding of RNA viruses is that integration of SARS-CoV-2 into the human genome would be very unlikely, it was important to examine the question.

"Unexpected findings in science — when confirmed independently — lead to paradigm shifts and propel fields forward. Therefore, it is good to be open-minded and examine unexpected results carefully, which I believe we did in our study," she said. "However, we did not find conclusive evidence for SARS-CoV-2 integration, but instead showed that during the RNA sequencing methodology, chimeras are produced at a very low level as an artifact of the laboratory technique."

"We found the frequency of host-virus chimeric events was, in fact, not greater than background noise," Kazemian said. "When we enriched the SARS-CoV-2 sequences from the bulk RNA of infected cells, we found that the chimeric events are, in all likelihood, artifacts. Our work does not support the claim that SARS-CoV-2 fuses or integrates into human genomes."

Pathogenic mechanisms underlying severe SARS-CoV2 infection remain largely unelucidated. High throughput sequencing technologies that capture genome and transcriptome information are key approaches to gain detailed mechanistic insights from infected cells. These techniques readily detect both pathogen and host-derived sequences, providing a means of studying host-pathogen interactions. Recent studies have reported the presence of host-virus chimeric (HVC) RNA in RNA-seq data from SARS-CoV2 infected cells and interpreted these findings as evidence of viral integration in the human genome as a potential pathogenic mechanism. Since SARS-CoV2 is a positive-sense RNA virus that replicates in the cytoplasm it does not have a nuclear phase in its life cycle. Thus, it is biologically unlikely to be in a location where splicing events could result in genome integration. Therefore, we investigated the biological authenticity of HVC events. In contrast to true biological events such as mRNA splicing and genome rearrangement events, which generate reproducible chimeric sequencing fragments across different biological isolates, we found that HVC events across >100 RNA-seq libraries from patients with COVID-19 and infected cell lines were highly irreproducible. RNA- seq library preparation is inherently error-prone due to random template switching during reverse transcription of RNA to cDNA. By counting chimeric events observed when constructing an RNA-seq library from human RNA and spike-in RNA from an unrelated species, such as fruit- fly, we estimated that ~1% of RNA-seq reads are artifactually chimeric. In SARS-CoV2 RNA- seq we found that the frequency of HVC events was, in fact, not greater than this background “noise.” Finally, we developed a novel experimental approach to enrich SARS-CoV2 sequences from bulk RNA of infected cells. This method enriched viral sequences but did not enrich for HVC events, suggesting that the majority of HVC events are, in all likelihood, artifacts of library construction. In conclusion, our findings indicate that HVC events observed in RNA-sequencing libraries from SARS-CoV2 infected cells are extremely rare and are likely artifacts arising from either random template switching of reverse-transcriptase and/or sequence alignment errors. Therefore, the observed HVC events do not support SARS-CoV2 fusion to cellular genes and/or integration into human genomes.


Note to journalists: Photos of Kazemian and copies of the Purdue logo are available on a Google Drive. Journalists visiting campus should follow visitor health guidelines.