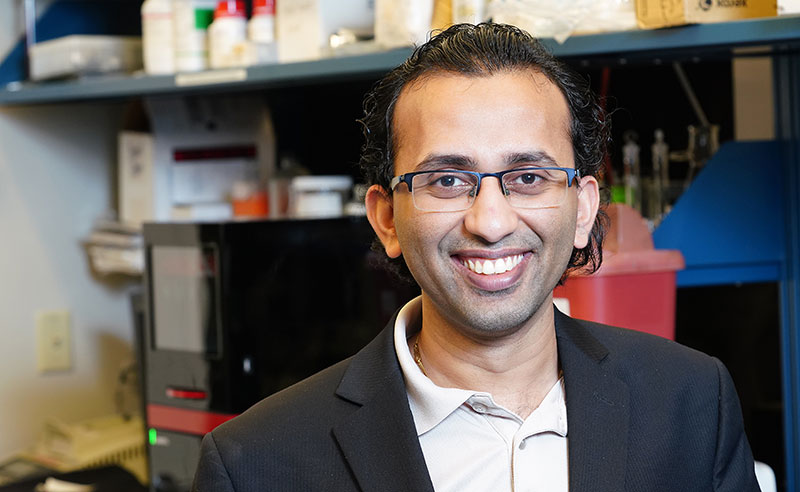 WEST LAFAYETTE, Ind. – Bovine respiratory disease is the most common and costly disease affecting beef cattle in the world. Mohit Verma, assistant professor of agricultural and biological engineering at Purdue University, recently received multiple awards, totaling $1.4 million, from the Foundation for Food and Agriculture Research (FFAR) to support his groundbreaking work to produce a biosensor-based decision-making tool to manage the disease.

The innovation also will help reduce and target the use of antibiotics, strengthening public trust in animal agricultural practices of antibiotic stewardship.

Verma explained why the complexity of this bovine disease has long presented challenges that he believes his team can address with new technology.

“Bovine respiratory disease is a complex syndrome with multiple infectious agents, including bacteria and viruses,” Verma said. “And the emergence of antibiotic resistance has definitely complicated this issue. But I feel confident we can develop biosensors that can be used in the field that determine which pathogen is present. Biosensors are low-cost and user-friendly.

“Since our biosensors incorporate most of the complexity within the device, users will require minimal training. With support from FFAR and our industrial partners, we will be able to create a diagnostic solution that will reduce losses, improve productivity and reduce the spread of antibiotic resistance.”

Nate Mosier, department head and professor of agricultural and biological engineering, nominated Verma for the FFAR New Innovator Award and praised Verma’s progress during the two years he has been at Purdue.

“Dr. Verma has built an impressive laboratory and network of professional colleagues that

includes veterinarians, animal scientists, microbiologists and farmers – all of whom will be essential to bringing his innovative technologies to farmers and ranchers,” Mosier said.

Verma came to Purdue after completing a Banting Postdoctoral Fellowship at Harvard University. He received his doctorate in chemical engineering (nanotechnology) from the University of Waterloo (Ontario), where he also earned a Bachelor of Applied Science degree in nanotechnology engineering.

His lab has recently published its first paper on this technology in ACS Agricultural Science and Technology.