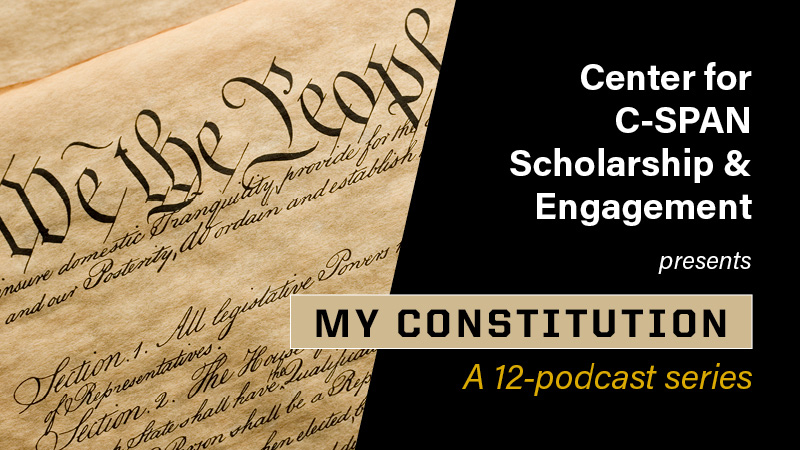 WEST LAFAYETTE, Ind. — When it comes to addressing the nation’s civic literacy, there may be no better resource than C-SPAN, the nonprofit television network that covers political and policy events, known for offering “your unfiltered view of government.” When it comes to harnessing C-SPAN’s content, there is no better place than the Center for C-SPAN Scholarship & Engagement at Purdue University.

Part of the Brian Lamb School of Communication, the Center for C-SPAN has launched a podcast charting the history and principles of the United States’ governmental system.

The series, titled “My Constitution,” was created as part of the Purdue’s Civics Literacy Proficiency program, a set of activities designed to support the university’s efforts to “graduate a knowledgeable and engaged citizenry.”

With over 2 million podcasts (and over 48 million episodes) currently available online, the creators of “My Constitution” knew they would have to make something special. The result is a blend of academic rigor and creative storytelling designed to be both informative and interesting.

“We knew that we wanted these to be amazing, to be accurate and to be above the fold,” says Connie Doebele, managing director of the Center for C-SPAN Scholarship & Engagement at Purdue, who oversaw the podcast’s production.

With a start in radio followed by more than 25 years as an executive producer for C-SPAN, Doebele has experience presenting political discussion in a way that keeps the audience tuned-in.

Doebele believes the storytelling format of “My Constitution” offers a way into understanding, not only the facts, but the effects of the American story.

Purdue President Mitch Daniels said during a recent interview on C-SPAN’s Washington Journal that the goal of Purdue’s Civics Literacy Proficiency program should be to teach beyond the facts of American history and government.

“It should not be limited to simply understanding the mechanics of our system,” Daniels says. “The ‘why?’ is just as important.”

Doebele says “My Constitution” helps demonstrate why the American system is built the way it is by showing the effects it has on real people.

“It’s easy to think of American history just as a topic, but there are real people at the heart of that history,” she says. “We leave in the details about the people involved — what happened after the cases were decided and elections were finished.”

Though committed to bringing American heart and spirit to the project, Doebele knew they needed the series to live up to Purdue’s reputation of educational excellence.

“To write the episodes, we wanted to bring in an expert who had already demonstrated excellence in teaching issues of U.S. political history and the Constitution,” Doebele says.

The Center for C-SPAN selected Peter Watkins, who was approaching the end of a limited-term lectureship in Purdue’s Department of Political Science. Doebele says she had heard about Watkins from students who raved about his classes on the Constitution. Watkins is now the academic program manager in the political science department.

To ensure the scripts remained accurate and objective, each episode was reviewed by multiple experts, usually including Robert Browning, professor of communication and political science, and director of the C-SPAN Archives, Doebele says.

The podcast series is one of three ways students at Purdue can fulfill the Civics Literacy Proficiency requirement. Other options are to take an approved course or attend a number of approved events. Additionally, a general test on civics knowledge is required. Purdue’s Board of Trustees recently voted to make the program a graduation requirement for all students admitted for and after fall of 2021.

“My Constitution” begins with the nation’s foundational history, including the Declaration of Independence and the Constitution, before moving to basics of governmental structure, including the separation of powers and federalism. The series also works through principles of freedom still in conversation today, including voting rights, the freedom to marry and freedom of speech. Each of the 12 episodes is about 15 minutes long and is accompanied by an interactive transcript, guiding questions and links to supplementary reading and viewing materials.

Though Doebele is the primary narrator of the series, she says organizers tried to bring in as many voices as possible. Whenever possible, episodes include audio clips from the C-SPAN Archives, interviews with firsthand sources and conversations with outside experts.

“This is a very C-SPAN way of doing it,” Doebele says. “A lot of people want to be the ones constantly telling the story; we like to be the ones who step back and let the real people who are involved tell the story themselves.”

This was easier for some episodes than others.

The episode “‘Storm Center’: The Supreme Court,” features a new interview with C-SPAN founder Brian Lamb, Purdue alum and namesake of the Brian Lamb School of Communication. Lamb’s reflection on the issue of cameras in the Supreme Court is woven through the episode, which also features audio from various justices, author David M. O’Brien and Lamb’s 1988 congressional testimony.

Other episodes feature emotive and insightful clips, such as crowds singing on the steps of the Supreme Court during Obergefell v. Hodges, a 2015 case considering the rights of same-sex couples to marry, but they had to get creative for some of the earlier topics.

“The C-SPAN Archives simply doesn’t have audio of Benjamin Franklin speaking,” Doebele says. “But we made it work.”

Though producing a video series would have been easy using the archives, which currently holds 268,000 hours of televised C-SPAN content, Doebele felt that an audio series was the way to reach both students and anyone interested in tuning in.

“A podcast seemed kind of fresh and new, something portable and accessible, and more to the C-SPAN style than putting together a book,” Doebele says. “Just like blending the academic with storytelling, it feels like a marrying of the traditional and the future in a way that meets students where they are.”

Issues of civics literacy have received a lot of attention since the 2016 election. According to the University of Pennsylvania’s Annenberg Public Policy Center, only 39% of Americans can name all three branches of government. A 2019 survey from the Woodrow Wilson Foundation found that Vermont was the highest-preforming state on a civics literacy exam, yet only 53% of the state received a grade of 60% or higher. One report says only 16 states require high school students to pass a civics exam in order to graduate.

“My Constitution” is currently available for listen or download on the Center for C-SPAN’s Civics Literacy Initiative website. More information about the center is available online.