Note to journalists: Photos of Kyle Albertson and a video of the award presentation are available on Google Drive. Journalists visiting campus should follow visitor health guidelines.

WEST LAFAYETTE, Ind. — Kyle Albertson is an achiever. But for him, achieving in everyday activities that most people take for granted requires determination, ingenuity, stamina and a whole lot of extra effort.

Purdue University’s newest recipient of the Tyler Trent Courage and Resilience Award embodies everything that Trent showed as he battled cancer and influenced people in multiple ways.

Albertson, diagnosed at 9 months old with congenital muscular dystrophy, which causes progressive weakness and loss of muscle mass, has battled – and beaten – challenges that few even have to consider. As he readies to graduate Saturday (May 15) from Purdue’s College of Agriculture, these are but a few of his hard-earned accomplishments: 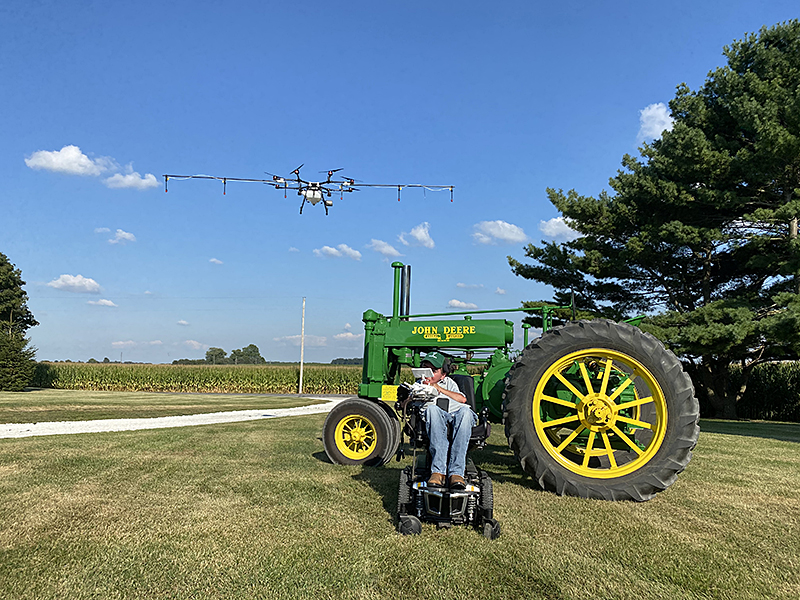 Kyle Albertson, the third recipient of Purdue University’s Tyler Trent Courage and Resilience Award, has already started his own agricultural drone business before he graduates May 15. (Photo provided) Download image

“Kyle’s mental toughness and ability to achieve the fullness of life, in spite of the obstacles, represents everything that the Tyler Trent award stands for,” Purdue University President Mitch Daniels said. “He defines a Boilermaker, a person who overcomes genuine adversity and leads others by example. I am inspired by his story; how could one not be.”

Daniels surprised Albertson with the honor during a virtual conference call among Albertson and his academic advisors. As Daniels got on the video call, the recipient’s family members joined in for the surprise.

Albertson, a senior from Fowler, Indiana, majoring in agribusiness with a concentration in management, is the essence of the Trent award, Daniels said.

With the assistance of technology, Albertson operates his wheelchair, his van, his cellphone, and a computer mouse. His resilience is shown in the effort he took to be able to drive, which took a combination of seeking out specialists, getting the right equipment and completing the proper training. He is now able to drive a modified van with a joystick, similarly to how his wheelchair operates. 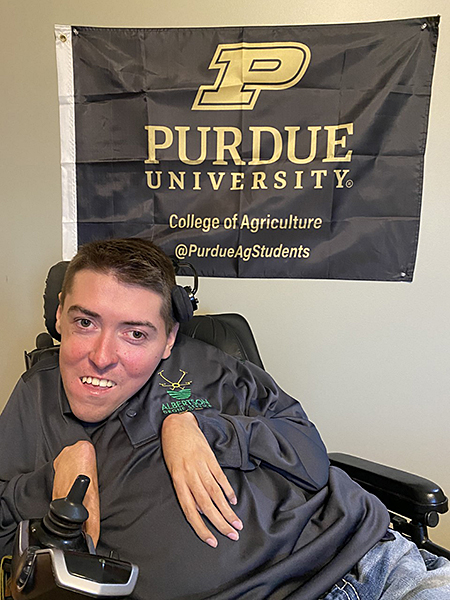 Kyle Albertson will graduate from Purdue’s College of Agriculture on May 15. (Purdue University photo) Download image

“Ever since I was 13, all I dreamed of was being able to drive,” he said.  “For over six months, my mom and I would travel to Louisville for training until I got my 50 hours of drive time in and could take the driver’s test. Five days shy of my 18th birthday, I got my driver’s license. All after a two-plus-year battle for someone to give me a chance to prove myself.”

Since then, Albertson has continued to prove himself as a student and entrepreneur. In addition to his summer internships, he is involved with FFA and 4-H. His drone business specializes in photography, crop monitoring, drone spraying and drone spreading, and he is the first licensed drone spraying contractor in Indiana. He plans to continue to develop the business following graduation. Learn more about Albertson.

“Kyle is a remarkable young man who has accomplished so much despite facing enormous physical challenges, said Andy Oppy, associate director of academic advising and career services in the Department of Agricultural Economics, who nominated Albertson for the award. “His approach to his college career and life in general has been an inspiration to his peers, myself and our department and all who have come into contact with him.”

Trent died in January 2019 at age 20 after a protracted battle with cancer. Before his death, he earned an associate degree in information technology at Purdue and founded Teens With a Cause, which recruits young people to perform service projects for families affected by cancer. He joined the Dance Marathon Club, a student organization that raises funds and awareness for Riley Hospital for Children in Indianapolis, where he received treatment. He also was named honorary football team captain for Purdue’s “Hammer Down Cancer” game in 2018 and served as the first student member of the Director’s Advancement Board of the Purdue University Center for Cancer Research.

In March 2019, Daniels announced during a ceremony that the gate where students enter into Ross-Ade Stadium would be named the Tyler Trent Memorial Gate. He also announced Sean P. English of Northville, Michigan, as the inaugural recipient of the Tyler Trent Courage and Resilience Award. Kamryn Dehn of Frankfort, Indiana, became the second recipient last June.

The award is made available through a combination of gifts that memorialize the late Trent’s inspiring legacy at Purdue and beyond. It is given to undergraduate students at Purdue’s West Lafayette campus who have encountered serious physical or similarly daunting adversity in their pursuit of higher education. Students may nominate themselves or be nominated by others. A committee of Honors College students who are also Stamps Scholars makes recommendations for the top five nominees. Daniels then chooses the recipient.

Online credit card gifts may be made here.

More information on the Tyler Trent Courage and Resilience Award is available.

Purdue University is a top public research institution developing practical solutions to today’s toughest challenges. Ranked the No. 5 Most Innovative University in the United States by U.S. News & World Report, Purdue delivers world-changing research and out-of-this-world discovery. Committed to hands-on and online, real-world learning, Purdue offers a transformative education to all. Committed to affordability and accessibility, Purdue has frozen tuition and most fees at 2012-13 levels, enabling more students than ever to graduate debt-free. See how Purdue never stops in the persistent pursuit of the next giant leap at https://purdue.edu/