WEST LAFAYETTE, Ind. — In 2018, passengers onboard a flight to Australia experienced a terrifying 10-second nosedive when a vortex trailing their plane crossed into the wake of another flight. The collision of these vortices, the airline suspected, created violent turbulence that led to a free fall.

To help design aircraft that can better maneuver in extreme situations, Purdue University researchers have developed a modeling approach that simulates the entire process of a vortex collision at a reduced computational time. This physics knowledge could then be incorporated into engineering design codes so that the aircraft responds appropriately.

The simulations that aircraft designers currently use capture only a portion of vortex collision events and require extensive data processing on a supercomputer. Not being able to easily simulate everything that happens when vortices collide has limited aircraft designs.

With more realistic and complete simulations, engineers could design aircraft such as fighter jets capable of more abrupt maneuvers or helicopters that can land more safely on aircraft carriers, the researchers said. 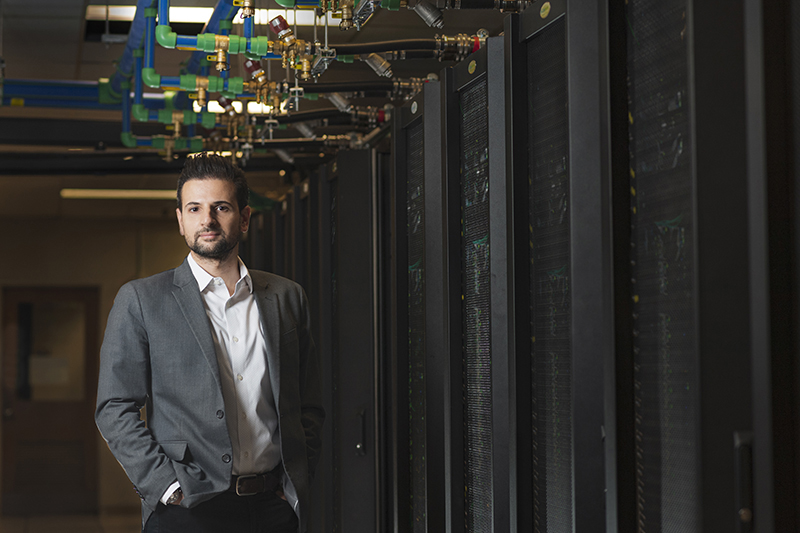 “Just to troubleshoot some of these calculations can take running them on a thousand processors for a month. You need faster computation to do aircraft design.”

Engineers would still need a supercomputer to run the model that Scalo’s team developed, but they would be able to simulate a vortex collision in about a tenth to a hundredth of the time using far less computational resources than those typically required for large-scale calculations.

The researchers call the model a “Coherent-vorticity-Preserving (CvP) Large-Eddy Simulation (LES).” The four-year development of this model is summarized in a paper published in the Journal of Fluid Mechanics.

“The CvP-LES model is capable of capturing super complex physics without having to wait a month on a supercomputer because it already incorporates knowledge of the physics that extreme-scale computations would have to meticulously reproduce,” Scalo said.

Former Purdue postdoctoral researcher Jean-Baptiste Chapelier led the two-year process of building the model. Xinran Zhao, another Purdue postdoctoral researcher on the project, conducted complex, large-scale computations to prove that the model is accurate. These computations allowed the researchers to create a more detailed representation of the problem, using more than a billion points. For comparison, a 4K ultra high definition TV uses approximately 8 million points to display an image.

Building off of this groundwork, the researchers applied the CvP-LES model to the collision events of two vortex tubes called trefoil knotted vortices that are known to trail the wings of a plane and “dance” when they reconnect.

This dance is extremely difficult to capture.

A new modeling approach allows engineers to simulate an entire vortex collision without needing to do extensive data processing on a supercomputer. (Purdue University video/Xinran Zhao)

“When vortices collide, there’s a clash that creates a lot of turbulence. It’s very hard computationally to simulate because you have an intense localized event that happens between two structures that look pretty innocent and uneventful until they collide,” Scalo said.

Using the Brown supercomputer at Purdue for mid-size computations and Department of Defense facilities for large-scale computations, the team processed data on the thousands of events that take place when these vortices dance and built that physics knowledge into the model. They then used their turbulence model to simulate the entire collision dance.

Engineers could simply run the ready-made model to simulate vortices over any length of time to best resemble what happens around an aircraft, Scalo said. Physicists could also shrink the model down for fluid dynamics experiments.

“The thing that’s really clever about Dr. Scalo’s approach is that it uses information about the flow physics to decide the best tactic for computing the flow physics,” said Matthew Munson, program manager for Fluid Dynamics at the Army Research Office, an element of the U.S. Army Combat Capabilities Development Command’s Army Research Laboratory.

“It’s a smart strategy because it makes the solution method applicable to a wider variety of regimes than many other approaches. There is enormous potential for this to have a real impact on the design of vehicle platforms and weapons systems that will allow our soldiers to successfully accomplish their missions.”

Scalo’s team will use Purdue’s newest community cluster supercomputer, Bell, to continue its investigation of complex vortical flows. The team also is working with the Department of Defense to apply the CvP-LES model to large-scale test cases pertaining to rotorcrafts such as helicopters.

“If you’re able to accurately simulate the thousands of events in flow like those coming from a helicopter blade, you could engineer much more complex systems,” Scalo said.

This work was supported by the Army Research Office’s Young Investigator Program under award W911NF-18-1-0045. The researchers also acknowledge the support of the Rosen Center for Advanced Computing at Purdue, and the U.S. Air Force Research Laboratory Department of Defense Supercomputing Resource Center, via allocation under the subproject ARONC00723015.

This paper investigates pre- and post-reconnection dynamics of an unperturbed trefoil knotted vortex for circulation-based Reynolds numbers ReG = 2 x 103 and 6 x 103 by means of direct numerical simulations (DNS) based on an AMR framework. Companion coherent-vorticity preserving (CvP) large-eddy simulations (LES) are also carried out on a uniform Cartesian grid. The complete vortex structure and flow evolution are simulated, including reconnection and subsequent separation into a smaller and a larger vortex ring, and the resulting helicity dynamics. The self-advection velocity before reconnection is found to scale with inviscid parameters. The reconnection process, however, occurs earlier (and more rapidly) in the higher Reynolds-number case due to higher induced velocities associated with a thinner vortex core. The vortex propagation velocities after reconnection and separation are also affected by viscous effects, more prominently for the smaller vortex ring; the larger one is shown to carry the bulk of the helicity and enstrophy after reconnection. The domain-integrated, or total helicity, H(t), does not significantly change up until reconnection, at which point it varies abruptly due to the rapid dissipation of helicity caused by super-helicity hotspots localized at the reconnection sites. The total helicity dissipation rate predicted by the LES agrees reasonably well with the DNS results, with a significant contribution from the modeled subgrid-scale stresses. On the other hand, variations in the vortex-centerline helicity, HC(t), and the vortex-tube-integrated helicity HV(t) are less sensitive to the reconnection process. Periodic vortex bursting events are also observed and are shown to be due to converging axial flow velocities in the detached vortex rings at later stages of evolution.


Note to journalists: A video about the development of this model is available on YouTube. For a copy of the paper, please contact Kayla Wiles, Purdue News Service, at wiles5@purdue.edu or 765-494-2432. Photos and video of the research process and simulations are available via Google Drive. Journalists visiting campus should follow visitor health guidelines.