The imaging, led by researchers at Purdue University and conducted at the U.S. Department of Energy's Argonne National Laboratory, revealed a three-dimensional view of the fuel's interior structure, laying the groundwork for better nuclear fuel designs and models.

Until now, examinations of uranium fuel have been limited to mostly surface microscopy or to various characterization techniques using mock versions that possess little radioactivity. But scientists want to know at a deeper level how the material changes as it undergoes fission inside a nuclear reactor. The resulting insights from this study, published in the Journal of Nuclear Materials, can lead to nuclear fuels that function more efficiently and cost less to develop.

To get an interior view of the uranium-zirconium fuel studied, the researchers sectioned off a bit of used fuel small enough to be handled safely—a capability developed only within the last seven years. Then, to see inside this tiny metallic sample, they turned to the Advanced Photon Source (APS), a DOE Office of Science User Facility located at Argonne. 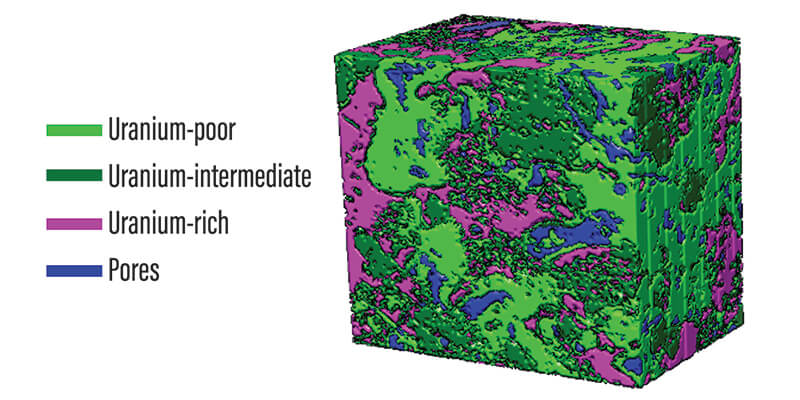 Before the researchers could approach the formidable task of isolating a fuel sample and placing it under an X-ray beam, they needed to find the right specimen. Exploring fuels archived at DOE’s Idaho National Laboratory (INL), they identified a uranium-zirconium fuel that spent a total of two years at full power in the Fast Flux Test Facility in Hanford, Washington, and was removed from the reactor in the early 1990s.

"We had to wait decades for this fuel to radiologically cool or decay," said Maria Okuniewski, an assistant professor of materials engineering at Purdue University and the paper's lead author. "It was literally the coolest specimen that we could remove based on the permissible safety guidelines at both INL and APS."

Even the coolest available spent fuel specimen was still too hot, radiologically speaking, at its original size. Taken from a larger fuel pin, the sample was less than a quarter of an inch high, but it measured 1,200 millirem per hour from a distance of 30 centimeters — a radiation level 240 times larger than the allowable limit at the APS.

To reduce the radioactivity, the researchers used a focused ion beam with scanning electron microscopy at INL to create a much smaller sample. The tool allowed them to pinpoint an area of interest and deploy a stream of ions that essentially milled out a cube of material. The resulting sample was roughly 100 microns across, no larger than the diameter of a human hair.

"We've come a long way with this new instrumentation that allows us to obtain samples that are small enough to be safe and easily handled," Okuniewski said.

The miniscule sample was mounted on a pin, encased in a double-walled tube, and sent to Argonne, with multiple radiation checks to ensure safety along the way.

At Argonne, the Purdue research team worked with scientists at beamline 1-ID-E, a high-brilliance X-ray source at the APS, to examine the sample. The goal: To see what uranium-zirconium fuel looks like on the inside after it has been bombarded with neutrons for two years.

"We are really talking about a piece of dust that you can barely see with the naked eye — it's that small," said Peter Kenesei, a physicist with Argonne’s X-ray Science Division and study co-author. "But this is also very dense material, so you need a sufficient intensity of high-energy X-rays to penetrate and study it."

The technique used, micro-computed tomography, detects at high resolution the X-ray beam as it emerges on the other side of the sample. From multiple images taken as the fuel was rotated, computers could reconstruct its internal features based on how it altered the incoming beam, similar to a medical CT scan.

"The 1-ID-E beamline's flexibility, along with Argonne's expertise in safely handling nuclear materials, allows us to design and conduct a unique experiment like this one," Kenesei said.

In particular, Okuniewski and her colleagues were interested in the phenomenon of swelling. Nuclear fuel generates energy by taking one uranium atom and splitting it into two, and this fission process generates byproducts such as the gas xenon and metals like palladium and neodymium. As atoms split and fission products accumulate, the fuel grows in volume.

The safety and longevity of any given nuclear fuel depends on being able to predict how much it will swell. Too much swelling can cause the uranium to react with, and possibly fracture, its protective outer layer, called a cladding. To prevent that from happening, engineers rely on fuel performance codes, which are computer models that simulate various aspects of a fuel's behavior in a reactor, such as how hot in temperature it will get and how its constituents redistribute in space.

"In every single fuel type, swelling is an issue," Okuniewski said. "These fuels are designed so that the inner core is free to expand to a specific level before it touches the cladding."

In addition to providing a clearer, localized picture of the fuel structure and the different material phases that developed over time, the study at the APS revealed evidence that the release of fission gases might continue to occur beyond the thresholds assumed in previous analyses. This type of data can help strengthen fuel performance codes, which in turn would help lower the cost of fuel development, since reliable computer simulations can minimize the number of expensive irradiation tests needed.

"We're always striving within the nuclear community to figure out ways that we can improve the fuel performance codes," Okuniewski said. "This is one way to do that. Now we have three-dimensional insight that we previously didn't have at all."

The paper, "The application of synchrotron micro-computed tomography to characterize the three-dimensional microstructure in irradiated nuclear fuel," was supported by Purdue University and DOE's Office of Nuclear Energy. The authors, in addition to Okuniewski and Kenesei, are Jonova Thomas, Alejandro Figueroa Bengoa, Sri Tapaswi Nori, and Ran Ren at Purdue; Jon Almer at Argonne; James Hunter at Los Alamos National Laboratory; and Jason Harp at INL.

Argonne National Laboratory seeks solutions to pressing national problems in science and technology. The nation’s first national laboratory, Argonne conducts leading-edge basic and applied scientific research in virtually every scientific discipline. Argonne researchers work closely with researchers from hundreds of companies, universities, and federal, state and municipal agencies to help them solve their specific problems, advance America’s scientific leadership and prepare the nation for a better future. With employees from more than 60 nations, Argonne is managed by  UChicago Argonne, LLC for the U.S. Department of Energy’s Office of Science.

About U.S. Department of Energy’s Office of Science

The U.S. Department of Energy’s Office of Science is the single largest supporter of basic research in the physical sciences in the United States and is working to address some of the most pressing challenges of our time. For more information, visit
https://​ener​gy​.gov/​s​c​ience.

This research demonstrated the first time that synchrotron X-ray micro-computed tomography (μ-CT) was utilized to analyze the three-dimensional (3-D) morphology of the microstructure of irradiated nuclear fuel. Both absorption contrast and propagation-based phase contrast enhanced μ-CT techniques were evaluated. Porosity and phase region volumes were determined in neutron irradiated uranium 10 wt% zirconium (U–10Zr) using propagation-based phase contrast enhanced μ-CT. Volumes were calculated using image processing software and algorithms, with the porosity volume subsequently compared to the ASTM E562 method. The 3-D porosity of a small region (∼8 × 105 μm3) located in the intermediate fuel redistribution zone that was removed via a focused ion beam was determined to be 7.2% via image processing. A detailed 3-D analysis of the porosity with respect to volume and morphology was provided. Five growth stages of pore evolution were observed including: nucleation, growth, coalescence, interconnected porosity, and extended/interconnected porosity. Four distinct phase regions were identified, including the pores, via both absorption contrast and propagation-based phase contrast enhanced μ-CT. A quantitative comparison of fuel swelling between this localized microscopic U–10Zr fuel region that was previously irradiated in the Fast Flux Test Facility, and historic U–10Zr fuels irradiated in the Experimental Breeder Reactor-II (EBR-II), was conducted. It was determined that for similar burnups, the localized swelling in this microscopic fuel region was 7.7%, which was approximately one-half of the value of the macroscopic swelling reported in EBR-II irradiated fuel. With the advent of new specimen preparation tools for irradiated materials, as well as advances in characterization techniques, researchers can now obtain previously inaccessible microstructural insight into irradiated fuels. This possibility naturally lends itself to improved fuel performance models for the nuclear community.


Note to journalists: A video about this research is available on YouTube. For a copy of the paper, please contact Kayla Wiles, Purdue News Service, at wiles5@purdue.edu or 765-494-2432. 3D renderings of irradiated nuclear fuel from the study are available via Google Drive. Journalists visiting campus should follow visitor health guidelines.