Rewriting the book on the fluid mechanics of blood vessels 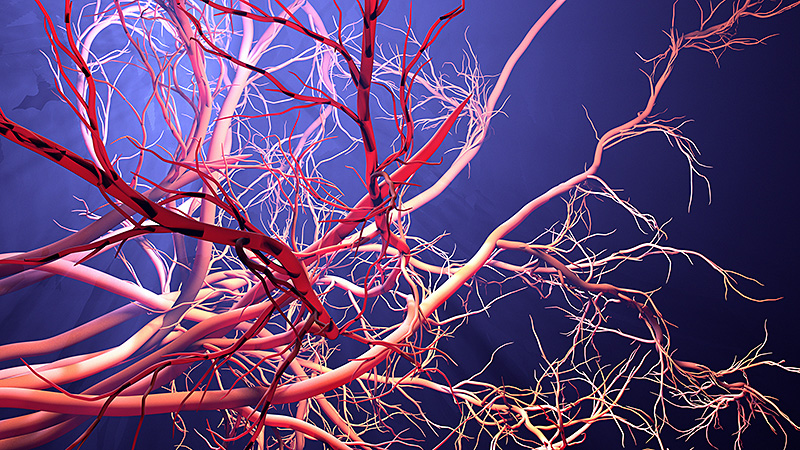 Blood vessels are a unique subject in fluid mechanics because their elastic structure affects the flow, while the flow also affects the structure. Purdue University researchers have been able to distill this complex relationship into a single mathematical expression. (Image provided)

This complex relationship has been modeled in biomechanics textbooks for years, but Purdue University researchers have recently questioned these models. Using a combination of advanced fluid mechanics and solid mechanics, they have established a new generalized flow law for elastic microtubes like blood vessels.

“When we first teach fluid mechanics to students, we begin by studying fluid flow in a pipe, which is a rigid shape and fixed length,” said Ivan Christov, a Purdue assistant professor of mechanical engineering. “But if the pipe is elastic, then there is a complex interaction between the flow and the confinement of the vessel walls. The pressure drives the flow, but the pressure also deforms the pipe, and when the pipe deforms, that alters the pressure.”

Christov had been observing these principles in his microfluidics research, which focuses on flexible micro-scale human-made conduits that are often used in technological contexts like microchips and biomedical devices. He was examining the effects of different cross sections of channels – circular, elliptical, rectangular – and consulted existing literature to see if there were existing theoretical models he could use.

“We assumed that biomechanics researchers had already solved this because this deformation happens all the time with blood vessels,” Christov said. “We looked at some biomechanics textbooks, and they had existing calculations of how pressure and flow rate are related if the tube deforms. But we were getting different results than what the book was giving us, so we decided to investigate.”

“We already understood how our elastic microchannels behaved,” Anand said. “If we could apply these same principles to blood vessels, then we would establish some new foundational science.”

Their research has been published in ZAMM, the Journal of Applied Mathematics and Mechanics as an “Editor’s Choice,” identified by the journal’s editor-in-chief as “particularly valuable or interesting.”

Anand discovered some discrepancies in how the elasticity of the structures was considered. “When blood vessels expand in one direction, they contract in a perpendicular direction. This is called the Poisson effect,” Anand said. “Existing equations only accounted for one of those aspects.”

Anand also factored in the tube’s attachments at its endings; unlike theoretical standalone tubes, blood vessels are always attached to other structures in the body, which affects their deformation.

Anand was able to distill the relationship between the deformation and the flow rate into a mathematical expression, referred to as a “generalized Hagen–Poiseuille law for soft microtubes.”

Anand confirmed the theory by building a direct numerical simulation on the ANSYS computational engineering platform. He incorporated non-Newtonian flow physics because biofluids tend to be non-Newtonian. The simulations confirmed that their mathematics were correct.

“Biomechanics is a very mature science, and we’re certainly not the first people to study blood vessel deformation,” Christov said. “By using a combination of fluid mechanics and solid mechanics, it’s pretty amazing we were able to define this phenomenon using a single mathematical expression.”

Beyond its use in microfluids and biomechanics, Christov sees several practical applications for their equations. “Imagine you had a soft robot,” he said. “You could use fluid-filled elastic tubes to actuate a manipulator arm, even at micro-scale sizes.”

Anand’s journey involved discovery, in more ways than one. “When I came to Purdue for my Ph.D., I only knew fluid mechanics. I didn’t know solid mechanics or biomechanics at all,” he said. “Because of this project, I spent hours in the library learning the theories behind structural mechanics, and I became fascinated. Professor Christov gave me all the resources I needed, and I’m honored we were able to validate these theories.”

This research was supported by the National Science Foundation under grant No. CBET-1705637.

A flow vessel with an elastic wall can deform significantly due to viscous fluid flow within it, even at vanishing Reynolds number (no fluid inertia). Deformation leads to an enhancement of throughput due to the change in cross-sectional area. The latter gives rise to a non-constant pressure gradient in the flow-wise direction and, hence, to a nonlinear flow rate–pressure drop relation (unlike the Hagen–Poiseuille law for a rigid tube). Many biofluids are non-Newtonian, and are well approximated by generalized Newtonian (say, power-law) rheological models. Consequently, we analyze the problem of steady low Reynolds number flow of a generalized Newtonian fluid through a slender elastic tube by coupling fluid lubrication theory to a structural problem posed in terms of Donnell shell theory. A perturbative approach (in the slenderness parameter) yields analytical solutions for both the flow and the deformation. Using matched asymptotics, we obtain a uniformly valid solution for the tube’s radial displacement, which features both a boundary layer and a corner layer caused by localized bending near the clamped ends. In doing so, we obtain a “generalized Hagen–Poiseuille law” for soft microtubes. We benchmark the mathematical predictions against three-dimensional two-way coupled direct numerical simulations (DNS) of flow and deformation performed using the commercial computational engineering platform by ANSYS. The simulations show good agreement and establish the range of validity of the theory. Finally, we discuss the implications of the theory on the problem of the flow-induced deformation of a blood vessel, which is featured in some textbooks.