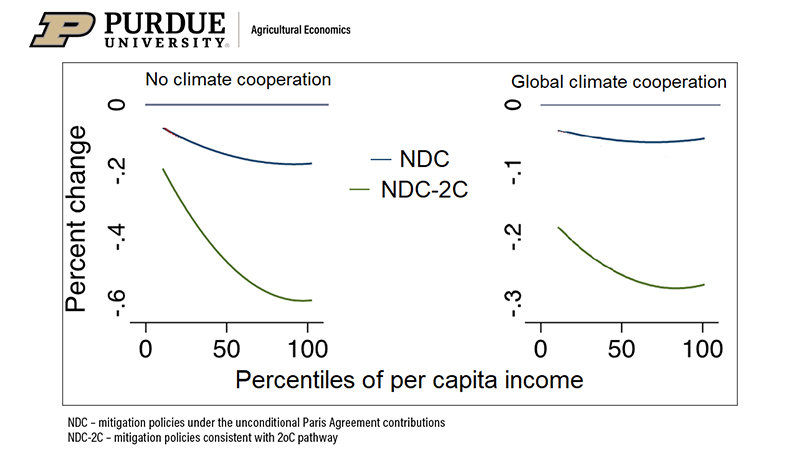 WEST LAFAYETTE, Ind. –President Biden has recommitted the U.S. to the Paris climate accord and also moved forward with a climate plan calling for carbon free electricity by 2035 and net zero emissions by 2050 — policies compatible with and beyond the 2 degrees C mitigation effort called for in the original Paris agreement.

While Biden’s policies are expected to bring multiple benefits to the environment and public health, implementation could result in additional costs to the U.S. economy and influence the energy sector, agricultural producers, households and other agents. To understand these impacts, a study by Purdue researchers, Maksym Chepeliev and Dominique van der Mensbrugghe of the Department of Agricultural Economics, in collaboration with Israel Osorio-Rodarte from the World Bank, examined both the costs of these mitigation efforts and how they would be distributed between different producer and consumer groups.

The researchers compared the potential impacts of the commitments of the 195 parties that signed the Paris agreement (called the Nationally Determined Contribution, or NDC), an unchanged U.S. climate policy, and new policies announced by the Biden administration. The analysis was conducted using a global computable general equilibrium model ENVISAGE, based on the Global Trade Analysis Project’s (GTAP) data base, and the World Bank’s GIDD microsimulation model to examine economic growth and income distributions.

“Adopting more aggressive climate mitigation policies would result in progressive income distribution, while negative macroeconomic impacts would be very limited,” Chepeliev said. “In addition, the benefits of adopting more stringent mitigation efforts would have a significant positive influence on the environment and health.”

A key study finding is the effect climate action will have on U.S. income distribution, primarily due to lower increases in food prices (1.1%) compared with the change in nonfood prices (1.8%), under an ambitious 2 degree C mitigation effort. This change will result primarily from increases in energy prices and fuel and transportation cost, which must be built into the cost of goods and services. However, since lower income households typically spend less on nonfood items, their cost burden will be considerably less than those in higher income households.

Implementation of the U.S. NDC, in the absence of global emissions trading, would lead to a real income reduction of only 0.17% in 2030. A more ambitious policy, consistent with limiting global warming below 2 degree C, would reduce real income by 0.55%. If the U.S. and other countries engage in cooperative climate actions that incorporate emissions trading, the corresponding real income losses are reduced substantially (0.06% and 0.27% respectively).

“Compared to other high-income countries – EU, Canada, Australia and New Zealand – the cost of emissions reduction in U.S. is much lower,” Chepeliev said. “Coupled with positive distributional impacts, environmental and health co-benefits, climate mitigation is a win-win policy to implement in the upcoming years.”

The full report, “U.S. Climate Policy Revisited: Macroeconomic and Distributional Impacts of the Paris Agreement,” was published on the Purdue Agricultural Economics Report website and is available.