Overlooking her shot: Women’s sports need an assist as coverage remains the same as 30 years ago

Note to journalists: A photo of Purdue professor Cheryl Cooky are available for media use via a Google Drive folder. Journalists visiting campus should follow visitor health guidelines. 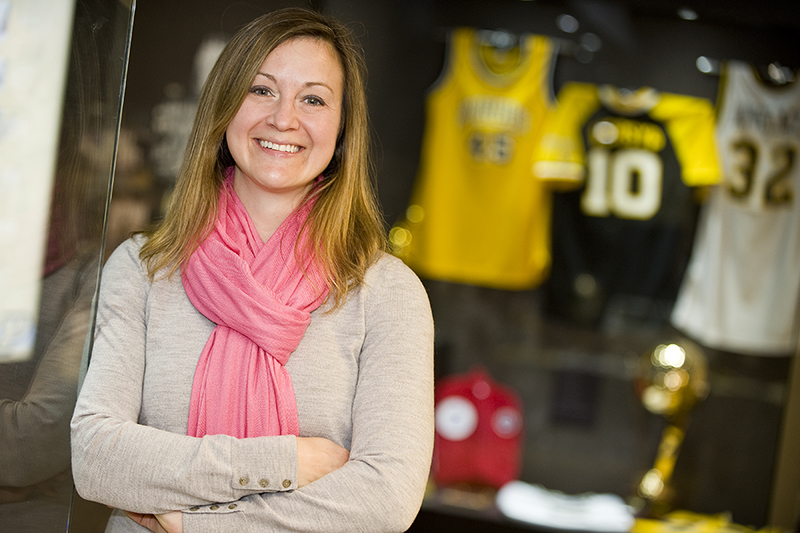 Cheryl Cooky, a professor of interdisciplinary studies at Purdue University, studies the representation of women’s sports in the media. Her latest study responds to 30 years of data collected in collaboration with researchers at the University of Southern California. (Purdue University file photo)

WEST LAFAYETTE, Ind. — Women’s sports receive the same amount of news coverage as they did in the 1980s, according to a study of sports reporting over three decades.

When women are given airtime, the coverage is lower in technical quality and production value when compared with coverage of men’s sports, the study finds. Even when social and digital media are taken into account, women athletes remain at the periphery of sports reporting.

“Over the past 30 years, we have not seen meaningful change in the amount of coverage women athletes receive,” said Cheryl Cooky, a professor of interdisciplinary studies at Purdue University.

In 1999, Cooky joined Michael Messner, professor of sociology and gender studies at the University of Southern California, in looking at how women’s sports are portrayed by mainstream news media. Cooky specializes in the social and cultural dynamics of sport, and her work focuses on representation of sport in the media. She has appeared as an expert consultant in a number of documentary films and on several television and radio shows.

“For a long time, the narrative around women’s sport in the United States was one of wholesale, linear progress,” Cooky said. “However, the research speaks holistically to the ways in which progress has not been universally linear. While some aspects have improved, deeply entrenched forms of inequality have kept other aspects from growing.”

Cooky points to participation in sport by school-age girls, which has increased from 1 in 27 girls to 1 in 3 in the 49 years since Title IX was enacted, as an area that has seen steady progress. The study, however, shows that women’s athletic representation in the media is one of the areas with room to improve.

Their study found that in 2019, coverage of women athletes on televised news and highlight shows, including ESPN’s SportsCenter, totaled only 5.4% of all airtime, a negligible change from the 5% observed in 1989 and 5.1% in 1993.

The total drops to 3.5% if coverage of the 2019 Women's World Cup is removed. The report’s title, “One and Done,” Cooky says, is a reference to the sporadic, short-term mass coverage exemplified by the Women's World Cup. The report is published online in Communication & Sport. More information is available in the USC story.

“Every now and then, women’s sports break through the glass ceiling of media coverage, but only when it’s an elite, international competition. Even these mega events are eclipsed by the steady stream of men's sports, which are covered in season, out of season, with more energy, and at higher production values," Cooky said.

To the research team’s surprise, despite the inclusion of digital media, which doesn’t face the same time and space constraints as televised media, the amount of women’s coverage didn’t change.

“The data from Twitter and online daily newsletters mirrored the trends we were seeing in televised coverage of women’s sports. With the exception of espnW (which stopped publishing mid-year), significant events were covered, but daily coverage was minimal,” said Maria Mears, a Purdue doctoral student who led digital and social media coding on the project.

Cooky, who is part of Purdue’s College of Liberal Arts, says the way women’s sports are represented is a point of concern on multiple fronts. Not only does minimal airtime deprive young girls of athletic role models, the manner in which women athletes are presented affects how people value their sports and their contributions to society.

In the 1980s and ’90s, the study shows, women athletes were generally subject to trivializing sexualization or humor; this shifted in the 2000s, when athletes were typically framed as wives, mothers and girlfriends. Both approaches diminish perceptions of the athletes’ abilities and conform to heteronormative roles and expectations. The 2019 report shows women athletes are treated with more respect than in the past, but there is a clear lack of energy and excitement.

“Women’s coverage is absent, largely, of the elements that we know make watching sport highlights compelling and interesting: exciting commentary, colorful, descriptive, animated delivery, and thoughtful, high-production value interviews and game footage. When you compare women’s coverage to men’s, the women’s comes across as quite bland,” Cooky said.

As Cooky said in a 2016 TEDx Talk, “the media creates demand as much as it meets it.”

The goal isn’t just to sell more women’s sports, Cooky says. The consequences of what she calls the asymmetrical representation between men’s and women’s sports are more invasive. For example, because men’s sports are given steady airtime, there is time to showcase their charitable contributions. Women aren’t given the same platform for their sports or their philanthropy.

The result is often a co-opting or erasure of efforts made by women, and more often, women of color.

“Keeping women athletes out of the news silences the activism and advocacy happening in women’s sports, which is very often oriented around institutional issues like racial and gender inequality,” Cooky said.

Her recent work scrutinizes how dynamics of asymmetrical gender representation in the media affect what forms of feminism and social advocacy make it to a general audience. For example, she says, a mainstream media narrative has presented former NFL quarterback Colin Kaepernick’s kneeling in 2016 as the beginning of racial justice efforts in sport.

“The lack of visibility of women’s sports along with the hypervisibility of the NFL has produced a story in which Kaepernick is an icon of racial activism,” Cooky said. “But this erases the labor and activism that WNBA athletes had and have been performing for years before.”

This research was funded by the Women’s Sports Foundation with support from the University of Southern California's Center for Feminist Research and the Purdue University Office of the Provost.