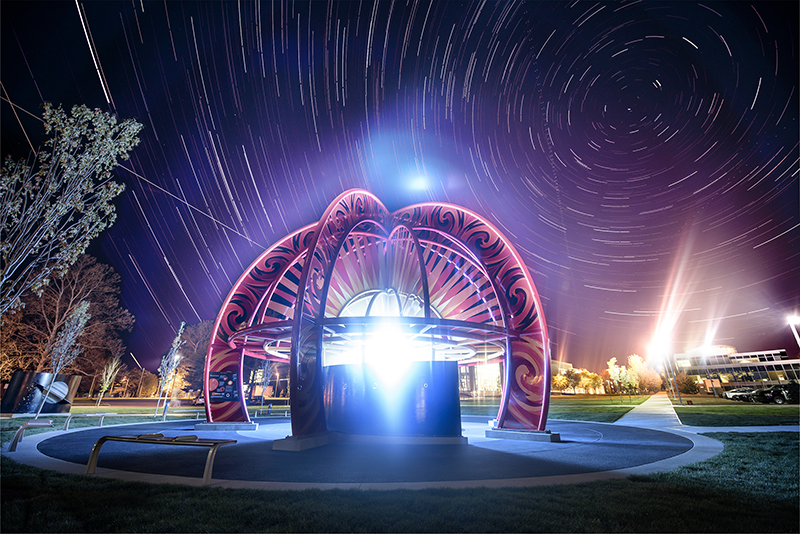 WEST LAFAYETTE, IND. – A record number of Purdue University students have been awarded the Astronaut Scholarship and will be presented the awards by U.S. Astronaut Hall of Fame inductee and Purdue alumnus Dick Covey.

The Astronaut Scholarship is given by The Astronaut Foundation, which was created in 1984 by the six surviving Mercury 7 astronauts. The scholarship is known nationwide for being among the highest merit-based monetary scholarships awarded to undergraduate students in science, technology, engineering and math to a closed circle of universities. The student recipients, who were previously announced, are Maia Clare, Zachary Marshall and Lindsey Wilson, representing the College of Science, the College of Engineering, the Honors College and the Purdue Polytechnic Institute.

Covey is a Purdue alumnus, having received a Master of Science in Aeronautics and Astronautics from Purdue in “1969. A former NASA astronaut, Covey has commanded and served on a number of flights, including Endeavour to service and repair the Hubble Space Telescope; STS-38, a classified Department of Defense mission in 1990; and STS 51-I, another spacecraft repair mission in 1985. He was inducted into the U.S. Astronaut Hall of Fame in 2004. Other accolades include the NSA Distinguished Public Service Medal, two Defense Distinguished Services Medals and five Distinguished Flying Crosses.

Purdue, a longtime member institution, is unique in offering three Astronaut scholarships to its students. The ASF has awarded an Astronaut Scholarship to a Purdue student since 1987, now named in honor of Purdue astronaut Gene Cernan and sponsored by Jim Hays. In 2020, a second and a third scholarship were awarded. One is sponsored by Kathy and Dick Covey and The Covey Love Legacy Fund. The other is sponsored by Marc and Sharon Hagle, and was announced in fall 2019. The scholarship amount, which was $10,000, has been increased to $15,000 by the foundation. Astronaut Scholars also have the opportunity to network with fellow scholar alumni and ASF member astronauts and are honored at the Innovator’s Gala, an event that occurred virtually on Aug. 20 and 21.

Covey will present the awards to the scholarship recipients in a special virtual event at 5 p.m. Feb. 23, streamed live here. In addition to an interview with Covey by Steven Collicott, Purdue aeronautical and astronautical engineering faculty member, the event will feature a presentation of the awards to the three students and a live Q&A with Covey. Students are invited to participate and ask questions. This event, which was originally scheduled for the fall 2020 semester, is part of the Honors College Visiting Scholars program, which features engaging events with interdisciplinary scholars from a wide variety of fields.

The National and International Scholarships Office (NISO), which is housed in the Honors College, supports all Purdue students in applying for prestigious scholarships. Students interested in such awards are encouraged to reach out to the NISO office by email at niso@purdue.edu, or to visit the NISO website at www.purdue.edu/niso.