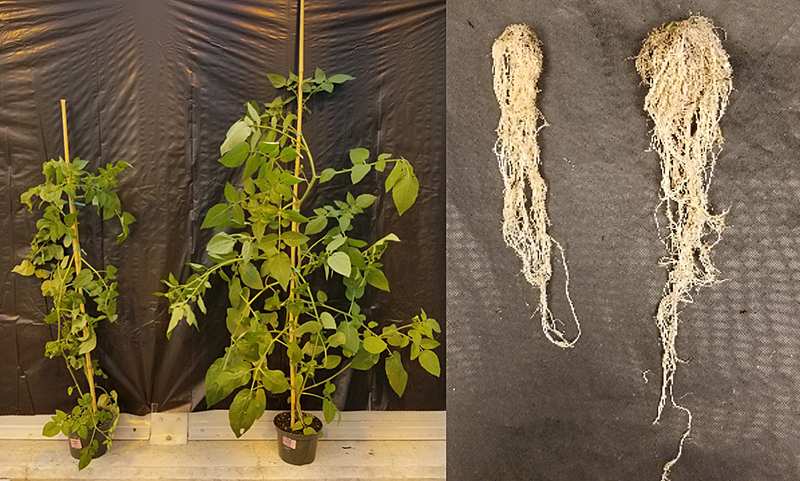 WEST LAFAYETTE, Ind. — Tomato plants are especially vulnerable to foliar diseases that can kill them or impact yield. These problems require a number of pesticides in conventional crops and make organic production especially difficult.

A Purdue University-led team of scientists has evidence that tomatoes may be more sensitive to these types of diseases because they’ve lost the protection offered by certain soil microbes. The researchers found that wild relatives and wild-type tomatoes that associate more strongly with a positive soil fungus grew larger, resisted disease onset and fought disease much better than modern plants.

“These fungi colonize wild-type tomato plants and boost their immune systems,” said Lori Hoagland, an associate professor of horticulture. “Over time, we’ve bred tomatoes for yield and flavor, but it seems they have inadvertently lost their ability to benefit from these soil microbes.”

In some of the wild-type tomatoes, the researchers saw up to 526% more root growth in plants treated with the beneficial fungus compared with those that weren’t treated, and as much as 90% more plant height. Some modern varieties had as much as 50% more root growth, but others showed no increase. Height in modern varieties increased about 10%-20%, far less than the wild types.

The researchers then introduced the plants to two disease-causing pathogens — Botrytis cinerea, a necrotrophic fungus that causes gray mold disease, and Phytophthora infestans, a blight-causing mold that was responsible for the Irish potato famine in the 1840s.

The wild-types showed increased resistance by up to 56% and 94%, respectively, for Botrytis cinerea and Phytophthora infestans. However, Trichoderma actually increased the disease levels in some genotypes, generally in modern plants.

“We saw significant response to the beneficial fungi in the wild-type plants, with increased growth and disease resistance,” Jaiswal said. “As we moved across the spectrum toward the domesticated varieties, we saw less benefit.”

Hoagland said her team wants to identify wild-type tomato genes responsible for soil microbe interactions and reintroduce them to current varieties. The hope is to keep the traits growers have selected for over thousands of years while recapturing those that make the plants stronger and higher-yielding.

“Plants and soil microbes can co-exist and benefit each other in so many ways, but we’ve seen that the plants we’ve bred for certain traits have broken that relationship. In some cases, we could see that adding what should have been beneficial microbes actually made some domesticated tomato plants more susceptible to disease,” Hoagland said. “Our goal is to find and restore those genes that can give these plants the natural defense and growth mechanisms that they had so long ago.”

Crop domestication events followed by targeted breeding practices have been pivotal for improvement of desirable traits and to adapt cultivars to local environments. Domestication also resulted in a strong reduction in genetic diversity among modern cultivars compared to their wild relatives, though the effect this could have on tripartite relationships between plants, belowground beneficial microbes and aboveground pathogens remains undetermined. We quantified plant growth performance, basal resistance and induced systemic resistance (ISR) by Trichoderma harzianum, a beneficial soil microbe against Botrytis cinerea, a necrotrophic fungus and Phytophthora infestans, a hemi-biotrophic oomycete, in 25 diverse tomato genotypes. Wild tomato related species, tomato landraces and modern commercial cultivars that were conventionally or organically bred, together, representing a domestication gradient were evaluated. Relationships between basal and ISR, plant physiological status and phenolic compounds were quantified to identify potential mechanisms. Trichoderma enhanced shoot and root biomass and ISR to both pathogens in a genotype specific manner. Moreover, improvements in plant performance in response to Trichoderma gradually decreased along the domestication gradient. Wild relatives and landraces were more responsive to Trichoderma, resulting in greater suppression of foliar pathogens than modern cultivars. Photosynthetic rate and stomatal conductance of some tomato genotypes were improved by Trichoderma treatment whereas leaf nitrogen status of the majority of tomato genotypes were not altered. There was a negative relationship between basal resistance and induced resistance for both diseases, and a positive correlation between Trichoderma-ISR to B. cinerea and enhanced total flavonoid contents. These findings suggest that domestication and breeding practices have altered plant responsiveness to beneficial soil microbes. Further studies are needed to decipher the molecular mechanisms underlying the differential promotion of plant growth and resistance among genotypes, and identify molecular markers to integrate selection for responsiveness into future breeding programs.