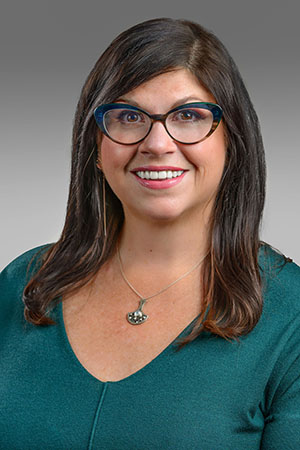 WEST LAFAYETTE, Ind. — Purdue alumna Melissa Frey has been named the next executive director of the Purdue Hillel Foundation, announced by the Board of Directors. She will succeed Philip Schlossberg, who has served as executive director since 2004. She began Monday (March 1)​ as director of development capacity, assuming the Executive Director role on July 1, following Philip’s departure.

"Purdue Hillel is extremely excited to welcome Melissa home to Purdue as she begins her tenure as our next executive director. Her resume speaks for itself, and the board is confident that she will only continue to build on the success that we have seen in the past. Purdue Hillel is in very capable hands for years to come,” said Michael Acks, chairman of the board. “My undergraduate experience was amplified in so many significant ways because of my involvement in Hillel. I believe deeply in the potential of the Jewish community on Purdue’s campus, and I know that this Hillel can grow to be a leader among Hillel on major campuses across North America. An undergraduate at Purdue, Frey earned her Bachelor of Arts in Visual Communication Design, served a term as Hillel president and co-host of the building."

Frey brings an impressive background of ethical leadership development and innovative engagement strategies, with a particular focus on Jewish GenZ. Most significantly, she served as the director of URJ (Union for Reform Judaism) Kutz Camp in Warwick, N.Y., for 12 years. During that time, Frey was responsible for the oversight of an American Camp Association-accredited residential camp that included a dynamic summer leadership program for highly engaged teens, a mainstreamed program for Jewish teens with Autism, and a seasonal retreat business that fostered Jewish community and identity.

Throughout her experiences over the past two decades working in ​formal and informal Jewish education, Frey has amassed a track record of building transformative leadership development curricula and deep, intentional Jewish communities. The communities nurtured under her leadership have propelled many of the brightest Jewish talent into meaningful professional and lay leadership roles in the Jewish and secular world.

“We are very excited to welcome Melissa Frey to the Hillel professional world, and I am confident she will bring deep commitment, creativity and transformative leadership to the Purdue Jewish community,” said Adam Lehman, president and CEO of Hillel International. “Her experience as a former Purdue Hillel student leader, coupled with her extensive background in Jewish camping, puts her in a unique position to engage and inspire the next generation of Purdue student leaders.”