Note to Journalists: Photos and b-roll of the fox being examined at the Purdue Veterinary Teaching Hospital, as well as photos of the fox and the Purdue veterinary medical oncologist at Wolf Park, are available for use via Google Drive folder. 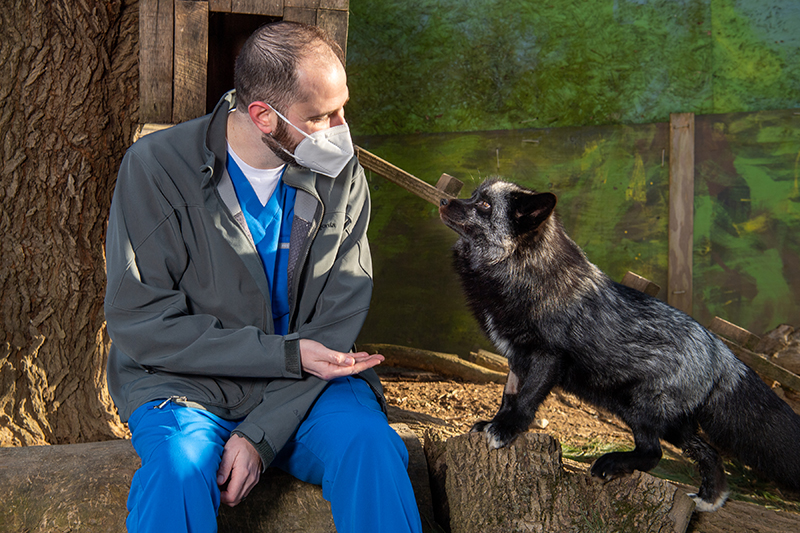 The most rewarding part of Joker's treatment, for Dr. Chris Fulkerson, has been seeing his tumors responding and watching him live his life as normal. (Purdue University photo/John Underwood)

WEST LAFAYETTE, Ind. — The Purdue University Veterinary Hospital works with many patients across species. None are more unusual perhaps than Joker, an 8-year-old silver-phased red fox undergoing treatment for lymphoma. 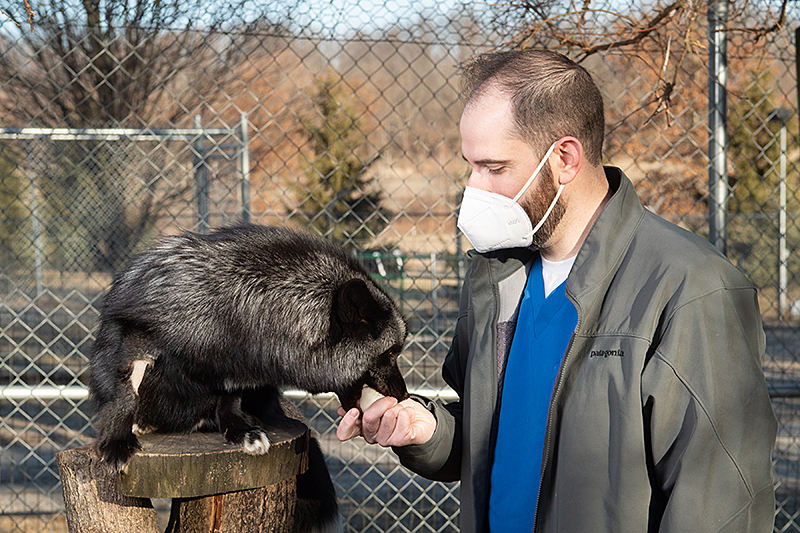 Fulkerson hadn’t previously worked with a fox patient. He and his team couldn’t find any literature about this type of lymphoma in foxes, so they are treating Joker based on a protocol often used for dogs with lymphoma. This chemotherapy protocol mainly uses chemotherapy pills, which the team thought was most likely to be well-tolerated and successful.

According to Fulkerson, Joker’s behavior is similar to that of a dog. He is as wild as possible at Wolf Park but is social and trained for medical procedures.

Joker has been at Wolf Park since 2015, when he was rescued after being found under a porch. His laid back personality – accompanied with a knack of playing practical jokes on his den mate Scarlette – make him a favorite among visitors.

To minimize his stress and anxiety, as many procedures as possible are followed at Wolf Park. Since January, Fulkerson has been going to Wolf Park almost weekly to administer Joker’s treatment and check his laboratory reports. On these days, Joker is rewarded with a special treat: an egg. 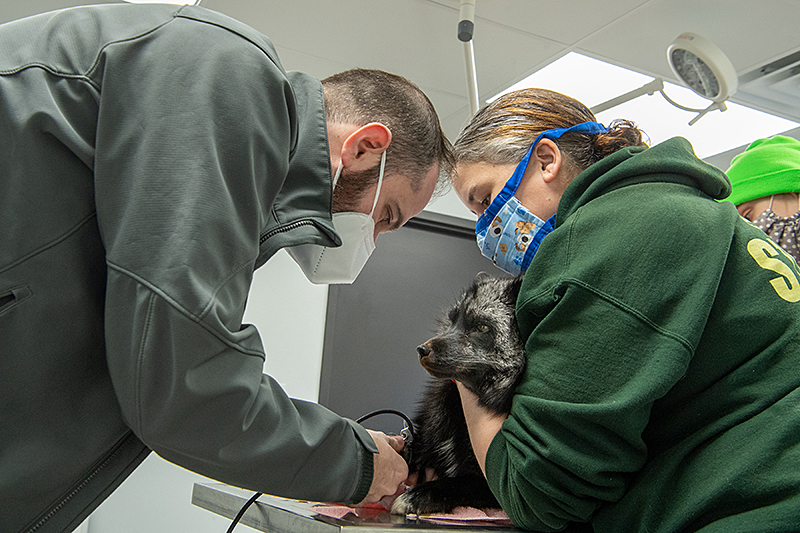 Joker is responding well to chemotherapy. After a few weeks of treatment, his lymphoma is in partial remission, meaning most of the lesions have gone away or have substantially decreased in size. He is undergoing chemotherapy treatments until mid-April. The hope is that over time, complete remission is achieved with the disappearance of all lesions, although the treatment time frame may be extended if lesions remain.

“We follow his lab work really closely to make sure that the chemotherapy drugs aren’t having any adverse effects on his white blood cell count. This drug can also cause liver injury, so we monitor his liver function and liver values. That all has been good throughout all the treatment, with no signs of obvious chemotherapy side effects,” Fulkerson said.

In captivity, red foxes can live 12-14 years. Each day, Joker engages in training and enrichment with staff and volunteers, and he has plenty of energy to play with his enrichment objects. Hendrix said that even during treatment, he hasn’t had any bad days.

Fulkerson said that the most gratifying and exciting part of Joker’s treatment has been seeing his tumors responding and seeing him living his life as normal.

“I was wearing my mask because of COVID-19,” he said of a recent visit, “but I told his handlers if they could have seen my face under it, I probably had one of the biggest smiles I’d had in the last year just from seeing him frolicking around and being excited and happy.”

Purdue has offset the cost of some of Joker’s procedures with teaching funds. Joker’s lymphoma has already been a good learning case for diagnostic imaging, oncology and pathology.  Following Joker’s progress may help with treatment of similar cases in the future.

The remaining costs, as of now, have been fully funded through donations to Wolf Park, although more need may arise in the future if his treatment is extended.

Hendrix said she’s thankful that Wolf Park has been able to partner with Purdue on Joker’s treatment.

“I just really have loved the partnership that has blossomed between Wolf Park and Purdue throughout this,” she said. “I’d love for there to be something that comes out of this to help other exotics so that people learn more about the progression of the disease, can help other animals in human care and can do more for them. Anything that can be learned from his case would be wonderful.”

Fulkerson agrees. He and his team plan to compile a case report on Joker so that this treatment option is documented to help other foxes diagnosed with lymphoma in the future.

“One of the great things about being at Purdue and being an academic veterinarian is that we can see some of these unusual things; we have some resources we can bring to help us learn about them, and then we can share that information with other veterinarians to help other patients in the future,” he said.