Note to journalists: A video about this underwater glider research is available on YouTube. For a copy of the paper, please contact Kayla Wiles, Purdue News Service, at wiles5@purdue.edu or 765-494-2432. Video and photos of the underwater glider experiments are available via Google Drive. Journalists visiting campus should follow visitor health guidelines.

WEST LAFAYETTE, Ind. — Autonomous underwater vehicles have become versatile tools for exploring the seas. But they can be disruptive to the environment or have trouble traveling through confined spaces.

Purdue University researchers are studying an alternative: highly maneuverable, low-cost underwater gliders that operate silently. Components and sensors of the glider also can be easily swapped out or added according to a wide range of mission specifications.

“Our goal is persistent operation of mobile robots in challenging environments,” said Nina Mahmoudian, associate professor of mechanical engineering. “Most underwater robots have limited battery life and must return back after just a few hours. For long-endurance operations, an underwater glider can travel for weeks or months between charges but could benefit from increased deployment opportunities in high-risk areas.”

An underwater glider differs from other marine robots because it has no propeller or active propulsion system. It changes its own buoyancy to sink down and rise up, and to propel itself forward. Although this up-and-down approach enables very energy-efficient vehicles, it presents several problems: The vehicles are expensive, slow and not maneuverable, especially in shallow water. 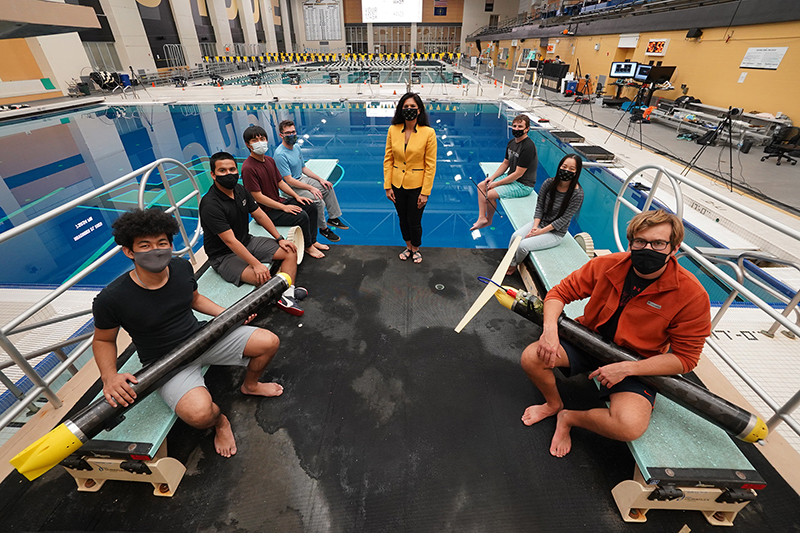 Nina Mahmoudian (center) and her students have developed an underwater glider that can operate silently and in confined spaces, ideal for conducting biology or climate studies without disturbing wildlife. (Purdue University photo/Jared Pike) Download image

Mahmoudian has developed an agile vehicle called ROUGHIE (Research Oriented Underwater Glider for Hands on Investigative Engineering). Shaped like a torpedo, ROUGHIE is about four feet long and features no outward propulsion or control surfaces other than a static rear wing. A video about the research is available on YouTube.

When deployed from shore or from a boat, ROUGHIE pumps water into its ballast tanks to change its buoyancy and provide initial glide path angle. To control its pitch, the vehicle’s battery subtly shifts its weight forward and backward, acting as its own control mechanism. To steer, the entire suite of inner components are mounted on a rail that rotates, precisely controlling the vehicle’s roll. The design is modular and adaptable for a variety of applications.

“This is a totally unique approach,” Mahmoudian said. “Most underwater gliders can only operate in deep oceans and are not agile for confined spaces. ROUGHIE has a turning radius of only about 10 feet, compared to an approximately 33-foot turn radius of other gliders.”

ROUGHIE is so maneuverable that Mahmoudian’s team has been testing it in the diving well at Purdue’s Morgan J. Burke Aquatic Center. By installing a motion capture system of infrared cameras below the water, they can track the vehicle’s movements and characterize its maneuvering behavior in three dimensions with millimeter accuracy.

“We program ROUGHIE with flight patterns ahead of time, and it performs those patterns autonomously,” Mahmoudian said. “It can do standard sawtooth up-and-down movements to travel in a straight line, but it can also travel in circular patterns or S-shaped patterns, which it would use when patrolling at sea. The fact that it can perform these tasks within the confined environment of a swimming pool using nothing but internal actuation is incredibly impressive.”

This maneuverability means that ROUGHIE is able to follow complex paths and can explore real-world areas other underwater gliders can’t.

“It can operate in shallow seas and coastal areas, which is so important for biology or climate studies,” Mahmoudian said. “And because it’s totally quiet, it won’t disturb wildlife or disrupt water currents like motorized vehicles do.”

ROUGHIE can be fitted with a variety of sensors, gathering temperature, pressure and conductivity data vital to oceanographers. Mahmoudian’s team has sent ROUGHIE into small ponds and lakes with a fluorimeter to measure algae bloom. The team also outfitted the vehicle with compact magnetometers, capable of detecting anomalies like shipwrecks and underwater munitions.  This research has been published recently in the journal Sensors.

Mahmoudian and her students have been developing ROUGHIE since 2012 when she began the project at Michigan Technological University.

“My students designed and built it from scratch, and they developed the control and navigational algorithms in parallel,” Mahmoudian said. “For the price of a current commercial vehicle, we can put 10 of these in the water, monitoring conditions for months at a time. We believe this vehicle has great value to any local community.”

This paper presents results from the integration of a compact quantum magnetometer system and an agile underwater glider for magnetic survey. A highly maneuverable underwater glider, ROUGHIE, was customized to carry an increased payload and reduce the vehicle’s magnetic signature. A sensor suite composed of a vector and scalar magnetometer was mounted in an external boom at the rear of the vehicle. The combined system was deployed in a constrained pool environment to detect seeded magnetic targets and create a magnetic map of the test area. Presented is a systematic magnetic disturbance reduction process, test procedure for anomaly mapping, and results from constrained operation featuring underwater motion capture system for ground truth localization. Validation in the noisy and constrained pool environment creates a trajectory towards affordable littoral magnetic anomaly mapping infrastructure. Such a marine sensor technology will be capable of extended operation in challenging areas while providing high-resolution, timely magnetic data to operators for automated detection and classification of marine objects.