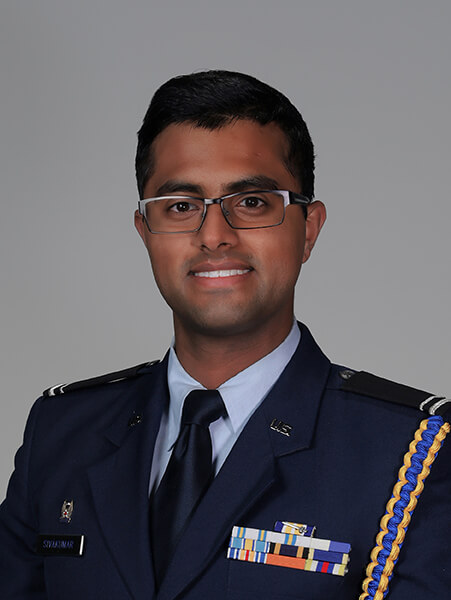 WEST LAFAYETTE, Ind. — Ashwin Sivakumar is graduating from Purdue in December with goals beyond finding a job. In fact, the Air Force ROTC member has his sights set on the stars.

Sivakumar recently was admitted to Purdue Graduate School funded by the Purdue Military Research Institute for research in the Materials Engineering Department and is awaiting Air Force release for this program. Once completed, Sivakumar will enter Space Force as an officer.

Becoming a Space Force officer is the culmination of childhood interests for Sivakumar, 22, of Aldie, Virginia, who is majoring in aeronautical and astronautical engineering in the School of Aeronautics and Astronautics.

“I’ve always liked space very much,” he said, adding that video games initially spurred his interest. “I loved astronomy as a child and rocketry and engineering.”

That childhood passion included the dream of one day becoming an astronaut. By taking a place in the U.S. Space Force, Sivakumar hopes it creates the opportunities for astronaut candidacy in the future.

“As an astronaut, I would hope to travel to Mars,” he said.

The U.S. Space Force was established in December 2019, becoming the sixth military service branch in the Department of Defense. By graduating four Space Force officers from Purdue, the “Cradle of Astronauts” has created another chapter in its tradition as a leader in space education and research.

“People in the Air Force know about Purdue and its connection to space,” Callahan said. “There is a strong interest from the Space Force and the Air Force in Purdue, and Sivakumar is an example of the quality of education we have here.”

As an Air Force ROTC cadet, Sivakumar will graduate from Purdue in December and be put on the Air Force inactive reserve. Then, when he is called onto active duty for Space Force, he will be given a training date and location.

In the meantime, Sivakumar said, he has been accepted into a doctoral program at Purdue in the School of Materials Engineering, working on a hypersonics project for Lockheed Martin.

At this point, cadets interested in Space Force do not have additional training. Callahan said Purdue Air Force ROTC is developing additional education and training for Space Force officers, but training is in the early stages. This spring, Space Force officer candidates will receive five or six informational briefings on space history, newly released doctrine and current events/announcements.

As a Space Force officer, Sivakumar wants his move to the new military branch to become something great and accelerate it in the coming decade to be one of the best in the world.

Around 16,000 military and civilian space personnel were assigned to the Space Force following its creation in December 2019.

Purdue University is a top public research institution developing practical solutions to today’s toughest challenges. Ranked the No. 5 Most Innovative University in the United States by U.S. News & World Report, Purdue delivers world-changing research and out-of-this-world discovery. Committed to hands-on and online, real-world learning, Purdue offers a transformative education to all. Committed to affordability and accessibility, Purdue has frozen tuition and most fees at 2012-13 levels, enabling more students than ever to graduate debt-free. See how Purdue never stops in the persistent pursuit of the next giant leap at https://purdue.edu/


Note to journalists: A photo of Ashwin Sivakumar in uniform is available on Google Drive. Journalists visiting campus should follow visitor health guidelines.