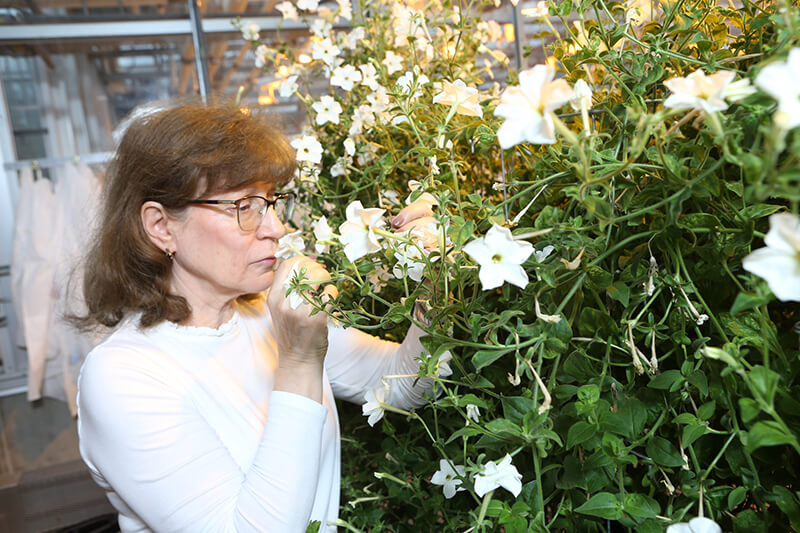 Natalia Dudareva and colleagues found that the cuticle of petunia flowers acts as a sink for volatile compounds. Rather than emitting more of these compounds when the cuticle is thinned, the plants produced fewer. The findings give scientists more information about how the cuticle can play important roles in plant cellular functions. (Purdue Agricultural Communication photo/Tom Campbell)

WEST LAFAYETTE, Ind. — A Purdue University biochemist and her colleagues have pioneered new methods for increasing production of volatile compounds important for plant defenses and for use in biofuels, pharmaceuticals and other products. While investigating how plants can more efficiently emit those compounds, Natalia Dudareva’s team also found an unanticipated factor playing a role in plant cellular functions.

Dudareva’s team had previously analyzed emission of volatile compounds through plasma membranes and was working on simplifying passage through the cuticle, a waxy substance on the surface of plant organs that is part of a plant’s defenses against pathogens and pests. The cuticle also helps plants retain water, and similarly can trap volatile compounds in tissues.

The solution, the team thought, would be to thin the cuticle. The lab did so by manually removing some of the cuticle from petunia flowers and developing genetically altered petunias that had thinner cuticles.

“If the cuticle serves as a barrier on the outside of a flower, logically you would think that a thinner cuticle  would make it easier for plant volatile compounds to move through it,” said Dudareva, a distinguished professor of biochemistry and interim director of the Purdue Center for Plant Biology. “We saw the opposite, however. Thinning the cuticle led to decreased volatile compound emissions and even less production of these compounds in the plants overall.”

Prior to these findings, which were published in the journal Nature Chemical Biology, the cuticle wasn’t known to play any role in internal volatile metabolism. The team, which also included biochemistry postdoctoral researcher Pan Liao and chemical engineering graduate student Rick Ray, found that the key issue is that hydrophobic volatile compounds are attracted to accumulating in the hydrophobic cuticle, which prevents internal cellular buildup.

“When we made the cuticle thinner, we reduced the amount of volatile storage,” said Joseph Lynch, a research scientist in Dudareva’s lab. “With no place to go, producing the same amount of volatiles would have been toxic to the plant. The cells either had to reduce the production of volatiles or die.”

“We chemical engineers get excited about dimensionless numbers, and we had the opportunity to develop one here,” Morgan said. “We hope that people adopt this in their work.”

Going forward, Dudareva and her team will continue working on methods to increase emission of volatile compounds in plants, including investigating how thickening the cuticle might affect production and emissions.

“We learned that the cuticle is a sink, and if you don’t have that sink, the cells shut down production of those volatiles,” Dudareva said. “This makes increasing emissions more complicated than we once thought, but sheds light on factors that can affect production of these compounds.”

The National Science Foundation and the U.S. Department of Agriculture’s National Institute of Food and Agriculture funded this work.

The plant cuticle is the final barrier for volatile organic compounds (VOCs) to cross for release to the atmosphere, yet its role in the emission process is poorly understood. Here, using a combination of reverse-genetic and chemical approaches, we demonstrate that the cuticle imposes significant resistance to VOC mass transfer, acting as a sink/concentrator for VOCs and hence protecting cells from the potentially toxic internal accumulation of these hydrophobic compounds. Reduction in cuticle thickness has differential effects on individual VOCs depending on their volatility, and leads to their internal cellular redistribution, a shift in mass transfer resistance sources and altered VOC synthesis. These results reveal that the cuticle is not simply a passive diffusion barrier for VOCs to cross, but plays the aforementioned complex roles in the emission process as an integral member of the overall VOC network.