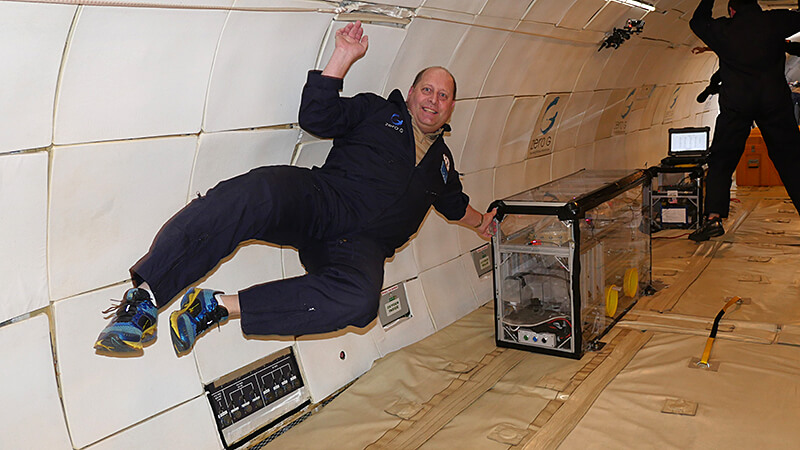 WEST LAFAYETTE, Ind. - Faculty members in Purdue University’s School of Aeronautics and Astronautics and School of Mechanical Engineering are among a list of 28 researchers whose technologies have been selected to receive funding under NASA’s Tech Flights solicitation.

Steven Collicott, professor of aeronautics and astronautics, will receive four separate grants totaling $1.8 million for four different experiments. Issam Mudawar, the Betty Ruth and Milton B. Hollander Family Professor of Mechanical Engineering, will receive one grant in the amount of $649,851.

NASA, in an Oct. 14 press release, announced its selections in two topic areas that reflect current priorities. The topics helped NASA identify technologies that could further the agency’s lunar exploration goals under the Artemis program and its use of commercial suborbital flight and low-Earth orbit platforms for research applications.

“In a spacecraft far from Earth, the blood and the air are both vital and limited and must be captured and separated for infusion or breathing. This project seeks to demonstrate the combination of devices in parabolic flight as an important step toward a complete surgical suite for long-duration human space flight,” Collicott said.

“Our current part of the big picture is investigating how the formation of bubbles in liquid nitrogen is influenced by various internal structures in the propellant tank,” Collicott said.

Collicott said that this experiment proposal was motivated by collaborator Mo Kassemi, professor at Case Western University and principal investigator of the Zero Boil-Off Test, recently performed in the International Space Station.

“The Purdue temperature measurement instruments —  thermocouples, reversible and irreversible color-changing materials and infrared cameras — will fly on the Masten rocket to measure the heating. This data will then be used to minimize vehicle weight and allow more payload to maximize mission success,” Collicott said.

“It will utilize parabolic flight experiments to acquire much-needed microgravity heat transfer data using liquid nitrogen as part of the efforts for near-term return of humans to the moon – for long-term exploration and use – and, thereafter, to Mars and other destinations,” Mudawar said.

NASA Category: “Fostering the Commercialization of Low-Earth and Utilization of Suborbital Space”

“There are very affordable, compact and lightweight self-contained 4K high-definition video cameras on the market, but they are not able to be controlled by a microprocessor or computer like a more expensive scientific camera can,” he said.

This project assesses computer control of the cameras using a voice chip.

“Testing this in the noisy cabin during parabolic flight is important to perform,” Collicott said.