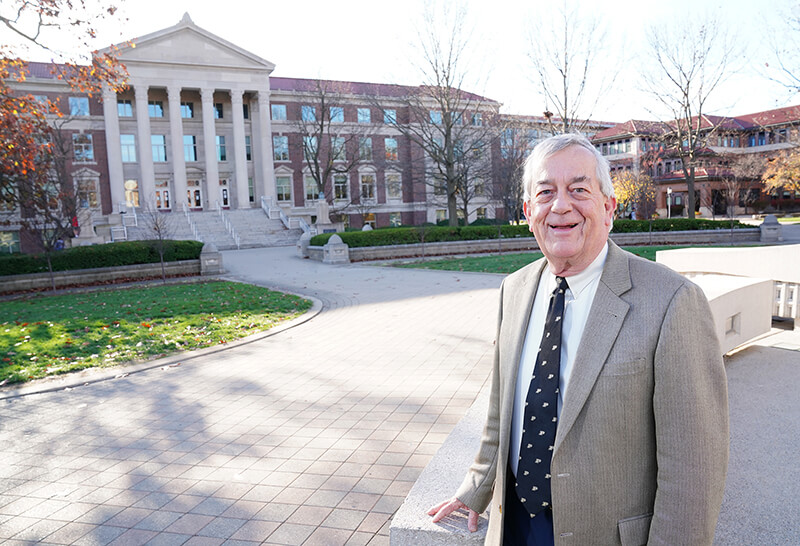 WEST LAFAYETTE, Ind. — Mark Russell, department head and professor of agricultural sciences education and communication (ASEC) at Purdue University, was awarded the Frederick L. Hovde Award of Excellence on Friday (Dec. 11) in appreciation of his commitment to educational service in rural Indiana and beyond. Indiana Farm Bureau has conferred the honor annually since 1972.

Raised on a small dairy farm in upstate New York, Russell always knew he wanted to work with animals, especially horses. After his undergraduate education, he pursued a Ph.D. in animal sciences, which, Russell said, allowed him to work with animals and people in nuanced and unexpected ways.

Russell began his work at Purdue as an animal sciences professor with an Extension appointment in the early 1980s. In 2015, he made the leap from that department to his current position in ASEC.

“Over the years, through my Extension work, I listened to so many employers saying, ‘Your students know science, but we have problems with how they work in teams or how they write.’ So, I became involved in leadership development within the college, teaching leadership skills for a diverse workplace,” Russell said. “My transition to ASEC allowed me to pursue this. The idea of helping others to communicate science and research, and how this ties into service learning, this is where I’m needed now.”

Don Villwock, owner of Villwock Farms, has worked with Russell in his Extension capacity consistently over the years and said few people better exemplify the mission of a land-grant university and passion for Extension work.

“Russell stands tall among all who live and work in the agricultural arena in Indiana,” Villwock said. “He has a passion for excellence and always has had with Indiana’s 4-H youth and Purdue students. His personal commitment to improving quality of life has been a cornerstone throughout his career.”

Russell’s Extension work has taken him beyond U.S. borders. In the early 2000s, the college challenged his department to provide an international trip for students. Russell began taking groups to places like China, Brazil, Hungary, Romania, Haiti and Peru.

“My major priority has always been to help students and people in Extension or agriculture to have an ability to work across various borders,” Russell continued. “I really look for opportunities to teach engagement methods, how you go into a community and foster learning and an exchange of information.”

Karen Plaut, the Glenn W. Sample Dean of the College of Agriculture, said Russell’s ever-evolving view of agriculture and his willingness to step in wherever he can contribute makes him the embodiment of the Hovde award.

“Mark Russell is the kind of educator and leader who won’t tell you about his commitment, he will show you,” Plaut said. “Mark’s dedication to students and Hoosiers is evident in every facet of his work, whether mentoring undergraduate and graduate students or spearheading international service learning trips. Everything he does is in service to building a strong, diverse and inclusive agricultural sector in Indiana and beyond.”