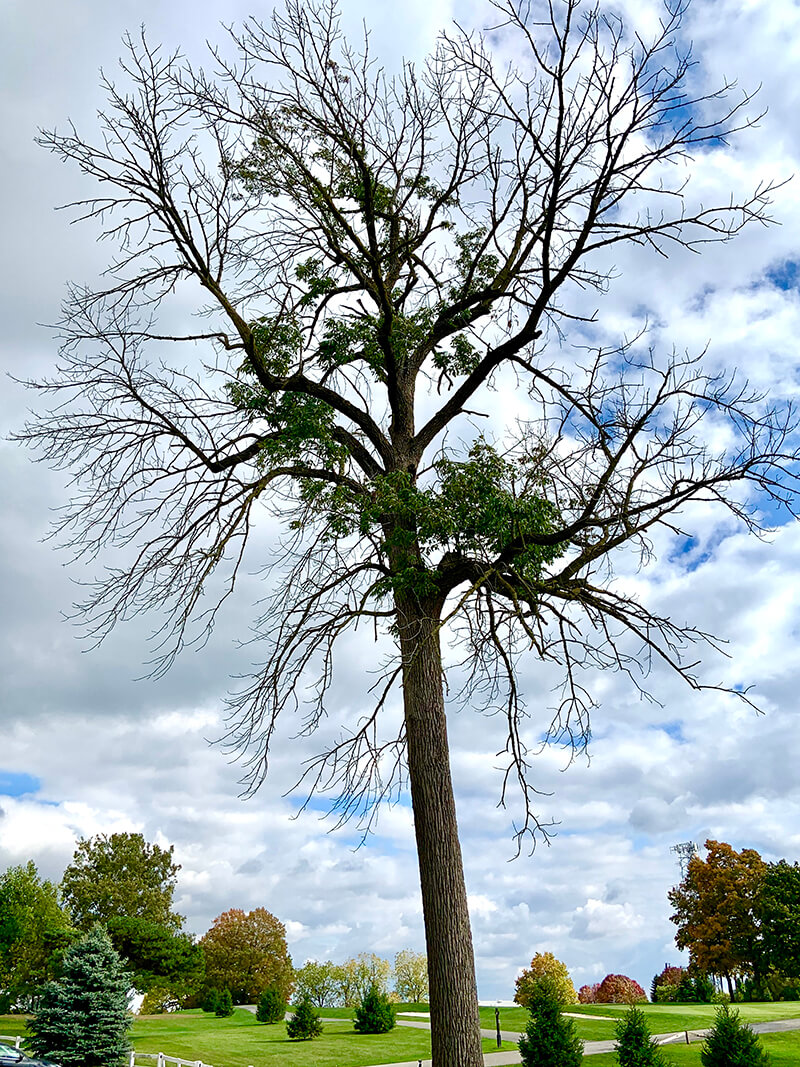 Ash trees, like the one seen here, are weakened as emerald ash borer larvae feed under their bark. The invasive pests eventually kill the trees and have been spreading throughout the United States for nearly two decades. Purdue’s Songlin Fei has shown that ash trees are not regenerating well in forests where the ash borers have invaded, leaving the tree species likely to become functionally extinct. (Photo provided by Songlin Fei)

WEST LAFAYETTE, Ind. —Since the emerald ash borer’s introduction to the United States at the beginning of the 21st century, forest ecologists and government officials have striven to stem its destruction of ash forests. Despite those efforts, the invasive pest may be winning the war.

Mining 16 years of U.S. Forestry Service Forest Inventory Analysis data for 960 counties, Purdue University professor Songlin Fei has shown that in impacted areas, young trees are dying before they can reach their reproductive stages. Unable to compete with larger trees or resist the emerald ash borer, American ash trees may be doomed to functional extinction.

“As we see overstory ash trees dying in these forests, we had hoped that ash would respond to the emerald ash borer like many forests do to fire, regenerating after the fire is gone,” said Fei, a professor of forestry and natural resources and Purdue Agriculture’s Dean’s Chair of Remote Sensing. “What we found is that these ash trees are not surviving. There is more mortality in the small-diameter ash trees than there is recruitment, and few are maturing into large-diameter trees capable of producing seed. In the long run, we will run out of material and no longer have ash reaching the reproductive age.”

Emerald ash borer, a beetle native to northeast Asia, was first detected in Michigan in 2002. Its western range has reached South Dakota in the north down to Texas in the south. It’s in every state east of that line except for Mississippi and Florida. Its larvae burrow under ash tree bark to feed, eventually weakening and killing trees, with losses estimated in the tens of millions so far.

Fei and colleagues from the U.S. Department of Agriculture Forest Service examined records from the U.S. Department of Agriculture’s Animal and Plant Health Inspection Service (APHIS) to catalog the locations of emerald ash borer infestations from three periods: 2002–06, 2007–12, and 2013–18. They paired that with the Forest Inventory Analysis data on tree populations collected from 2002-2007 and 2013-2018 to see how the invasions affected ash trees at different points after the ash borer first appeared in an area.

They discovered that in the years near emerald ash borer’s introduction, ash seedling populations were abundant in the forests but started to thin out without growing to maturity. In later years, the density of young trees declined significantly. Later periods had 500 fewer seedlings per hectare and sapling recruitment was 50% lower than the tree mortality rate.

“Despite this widespread regeneration, ash trees in the smallest overstory class died at faster rates than they were recruited from seedlings or saplings, resulting in negative population trajectories on plots that have been invaded for more than 10 years,” according to the authors’ findings, which will be published in the January issue of Forest Ecology and Management. “This trend suggests that ash will continue to decline in abundance and may become functionally extinct across the invaded range of emerald ash borer.”

Fei cautioned that the results do not suggest that ash trees will disappear altogether from the U.S. However, being functionally extinct means that they will not provide economic value as hardwoods or the ecological services they long have in forested areas.

“Like elm, which was decimated by the Dutch elm disease, there may be places with ash trees and seedlings in the understory, but they won’t mature in populations large enough to fulfill their traditional economic or ecological purposes,” Fei said. “There also are peripheral areas that haven’t been invaded by the emerald ash borer yet. In those places, we still have a chance and we do want to fight there to keep those forests safe.”

Ash trees in residential areas can be treated with insecticides to keep emerald ash borers away. People are also encouraged to buy firewood locally and not to move it long distances that could help the pest expand its range. More information is available here.

Non-native insects and pathogens can alter the composition and successional trajectories of forests and, in exceptional cases, drive their host trees functionally extinct. Emerald ash borer has killed millions of ash trees in its invaded range across eastern North America. Predicting the future ecological role of ash requires information on the extent of ash regeneration and recruitment in the wake of invasion. Variable levels of ash regeneration have been observed in stands invaded by emerald ash borer, although recruitment rates of young ash trees into the overstory remain unclear. Here, we used forest inventory data to quantify ash recruitment and regeneration across the eastern United States, and we linked these observed patterns to emerald ash borer invasion history. Inventory data from 2013-2018 indicate there has been extensive ash regeneration in invaded regions, totaling > 1,200 seedlings per ha in counties invaded in 2002–2006. Plots in counties with the longest invasion histories contained the highest densities of ash seedlings and saplings, likely due to the high densities of overstory ash in these areas prior to invasion by emerald ash borer. Seedling densities also remained generally unchanged between inventory periods ending in 2007 and 2018 irrespective of invasion history. Despite this widespread regeneration, ash trees in the smallest overstory class died at faster rates than they were recruited from seedlings or saplings, resulting in negative population trajectories on plots that have been invaded for more than ~ 10 years. This trend suggests that ash will continue to decline in abundance and may become functionally extinct across the invaded range of emerald ash borer. However, the future ecological role of ash will ultimately be determined by the iterative production and survival of ash seeds to reproductive ages in the presence of emerald ash borer populations, along with effective management practices.