Note to journalists: Photos of the researchers are available for use via a Google Drive folder.  Journalists visiting campus should follow visitor health guidelines. 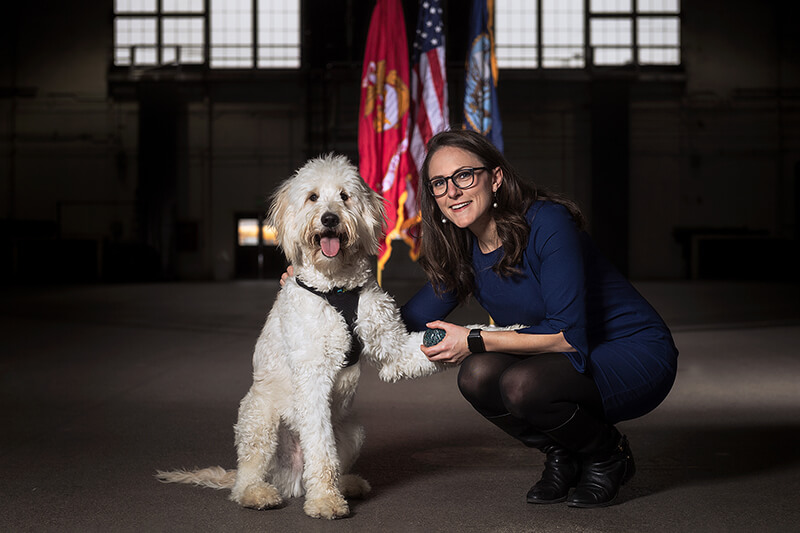 WEST LAFAYETTE, Ind. — Science has shown that service dogs can benefit some veterans with PTSD. But the exact role service dogs play in the day-to-day lives of veterans – and the helpfulness of the tasks they perform – is less known.

A recent study led by Purdue University’s College of Veterinary Medicine shows what trained tasks service dogs perform the most often and which ones are the most helpful to veterans with post-traumatic stress disorder. The study found that the task of disrupting episodes of anxiety ranked among the most important and most often used.

“There has been some debate on what kind of training PTSD service dogs need to be effective and how their assistance may be different than what a pet dog can provide,” said Kerri Rodriguez, a human-animal interaction graduate student and a lead author on the study. “This study suggests that veterans are, in fact, using and benefiting from the specific trained tasks, which sets these dogs apart from pet dogs or emotional support dogs.” 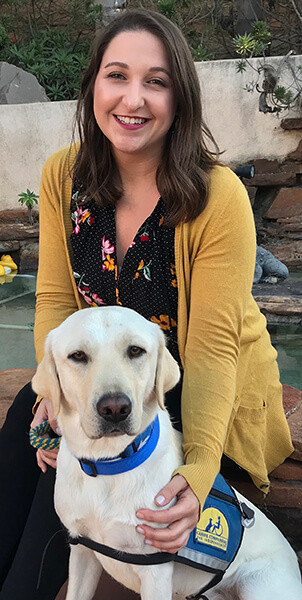 Rodriguez led the work with Maggie O’Haire, associate professor of human-animal interaction. Their research was published in Frontiers in Psychology. The study was done in conjunction with K9s For Warriors, with support and funding from Merrick Pet Care, and is in preparation for an ongoing large-scale clinical trial that is studying veterans with and without service dogs over an extended period of time.

The study found that, on average, the dog’s training to both alert the veteran to any increasing anxiety and providing physical contact during anxiety episodes were reported to be the most important and the most often used in a typical day. Veterans with a service dog also rated all of the service dog’s trained tasks as being “moderately” to “quite a bit” important for their PTSD.

Some trained tasks include picking up on cues veterans display when experiencing distress or anxiety and consequently nudging, pawing or licking them to encourage the veteran to focus on the dog. The service dogs also are trained to notice when veterans are experiencing anxiety at night and will actively wake up the person from nightmares.

The dogs also are trained to perform tasks in public – such as looking the opposite way in a crowded room or store to provide a sense of security for the veteran.

The study also found that trained service dog tasks were used on average 3.16 times per day, with individual tasks ranging from an average of 1.36 to 5.05 times per day.

The study surveyed 216 veterans from K9s For Warriors, including 134 with a service dog and 82 on the waitlist. The study complements a previous publication published last year that focused specifically on the service dogs’ training, behavior and the human-animal bond.

While service dogs were reported to help a number of specific PTSD symptoms such as having nightmares, experiencing flashbacks, or being hyperaware in public, there were some symptoms that service dogs did not help, such as amnesia and risk-taking.

“Both this research, as well as other related studies on PTSD service dogs, suggest that service dogs are not a standalone cure for PTSD,” O’Haire said. “Rather, there appear to be specific areas of veterans’ lives that a PTSD service dog can help as a complementary intervention to other evidence-based treatments for PTSD.”

Veterans on the waitlist to receive a service dog expected the service dog’s trained tasks to be more important for their PTSD and used more frequently on a daily basis than what was reported by veterans who already had a service dog.

“Veterans on the waitlist may have higher expectations for a future PTSD service dog because of feelings of hope and excitement, which may not necessarily be a bad thing,” Rodriguez said. “However, it is important for mental health professionals to encourage realistic expectations to veterans who are considering getting a PTSD service dog of their own.”

The work was funded by Merrick Pet Care, Newman's Own Foundation and the Purdue University College of Veterinary Medicine. More information about O’Haire’s research is featured online.

About K9s For Warriors

K9s For Warriors’ mission is to end veteran suicide. Based in Florida, we are the nation’s largest provider of Service Dogs to military veterans suffering from Post-Traumatic Stress, Traumatic Brain Injury and/or Military Sexual Trauma. Our program is unique, comprehensive, and proven, thanks to groundbreaking research conducted in partnership with Purdue University’s OHAIRE Lab. The majority of our Service Dogs come from high-kill shelters, which means that with each warrior-K9 pairing, two lives are saved.

Research suggests that psychiatric service dogs may be an effective complementary treatment option for military veterans with posttraumatic stress disorder (PTSD). Although this practice continues to increase in popularity and research has reached the rigor of clinical trials, the components of the PTSD service dog intervention remain largely undefined. This research aimed to (1) quantify the importance, usage, and PTSD symptom specificity of service dog trained and untrained behaviors, (2) explore how PTSD severity, time since receiving the service dog, and the veteran-dog relationship relate to outcomes, and (3) compare expectations of veterans on the waitlist to experiences of veterans with service dogs. In a cross-sectional design, 217 post-9/11 military veterans with PTSD were recruited from a national service dog provider, including n = 134 with a service dog and n = 83 on the waitlist. Results showed that the service dog’s trained tasks of calming and interrupting anxiety were perceived as the most important for veterans’ PTSD, the most frequently used in a typical day, and as helping the most PTSD symptoms. Trained tasks were most helpful to the PTSD symptoms of hypervigilance and intrusion, and least helpful toward the symptoms of amnesia and risk-taking. Although all trained tasks were helpful toward PTSD symptoms, veterans rated the service dog’s untrained behaviors on average as more important for their PTSD. After controlling for covariates, there was no relationship between a veteran’s PTSD severity and perceived importance or frequency of task use. However, veterans who reported feeling closer to their service dogs reported using trained tasks more often, and veterans who had their service dogs for longer reported using trained tasks less often. Finally, veterans on the waitlist reported higher expectations regarding task use and importance than described by veterans with a service dog. In conclusion, findings describe the core components of the PTSD service dog intervention by quantifying the use and value of trained and untrained dog behaviors. Overall, this study helps explain the PTSD service dog’s clinically relevant value while contributing to the scientific understanding of this emerging practice.